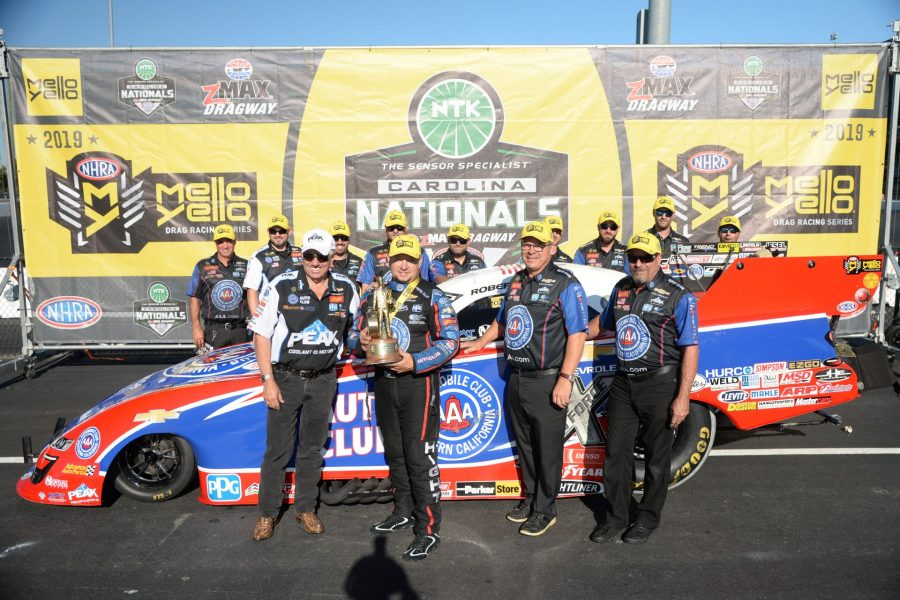 Hight is the seventh driver to reach 500 wins in the Funny Car class, joining teammate and mentor John Force whose 1,348 career round wins is 474 more than anyone else in the sport. Hight is the second driver to join the exclusive club this year along with PSM standout Andrew Hines.

With a final round victory over No. 1 qualifier Jack Beckman, Hight extended his Mello Yello lead to 44 points in advance of the coming 34th annual AAA Texas FallNationals at the Texas Motorplex. The win was a personal best sixth of the year for the two-time champion and his sixth overall at zMAX.

“I wouldn’t want to be anywhere else but right here (in the points lead). We can control our own destiny. When you’re chasing somebody, you can’t control what they do so I want to be here and I want to be here a month from now,” said Hight who has led the points all but one race this season. “That’s the goal. This was a good weekend for us. We got the points lead back last weekend in St. Louis but to come out here and extend it, that’s what we have to keep doing every race. I’ve never won six races in my life. This is the most I’ve ever won but right now I feel like I’m going to have to win eight to be the champ, so we’re up for it.”

“McIntire, first round, ran a 3.97. He actually had the quickest run in the right lane for Funny Car in that first round, so if we would have just slipped up a little, he would have gotten it and we would have been out of there,” Hight said. “That team, it was pretty cool to see those guys on the other end. They were pretty excited.”

In the second round, Hight and the Auto Club team were matched up with veteran racer, Tim Wilkerson. The race was won on the starting line with Hight’s .077-second reaction time coupled with his 3.929-second pass at 324.67 mph that gave him the holeshot win over Wilkerson’s 3.923 at 324.28 with his .102 reaction time.

The quarterfinal victory set Hight against Don Schumacher Racing rival, Matt Hagan in the semifinals. Hagan would have the starting line advantage but Hight pulled away at the 330-foot mark to take the victory with a pass of 3.912 seconds and 328.78 mph. Hagan ran a 3.947 at 327.35.

“Man, what a line up, Wilkerson and Hagan, and Beckman, boy it was a long day and it was hard work,” Hight said. “The Auto Club Chevy team really pulled together and did a good job. We’ve changed some things over the last few races and we’ve kind of been struggling but we went down the track every run here this weekend so hats off. Great job to Jimmy Prock and Chris Cunningham, and all the Auto Club guys.”

In his eighth final round of the season, Hight would face No. 2 in the points, Beckman. Like his quarterfinal race against Wilkerson, the final would be won on the starting line. Beckman would leave early by .080-seconds to trigger the red light and give Hight the win. The Auto Club Camaro would cross the finish line at 3.917-seconds and 329.02 mph after a solid, clean final pass down zMAX Dragway.

“Beckman left early and it plays tricks with your brain. You’re out there focused and waiting to see that tree, and all of sudden you hear him leave and think ‘am I late?’ and then you drive by that tree and you see that red light on his side and it’s just like a sigh of relief,” Hight explained. “It plays tricks with your brain but if you’re really focused, you know when somebody leaves early and that was pretty early. A guy like Beckman doesn’t make that mistake very often but I’ll take them however I can get them.”

Brittany Force and the Advance Auto Parts Top Fuel team, started race day with an opening round victory over Smax Smith after lighting up the scoreboard with a wicked 3.698-second pass at 329.42 mph. It was low E.T. of the round and bettered Smith’s 6.139 at 102.00 after he smoked the tires.

“This Advance Auto Parts team stepped things up this weekend. We made some big moves on the track and in the points. We qualified third, picked up four bonus points and made a semifinal round appearance, so I’m excited and I know that winner’s circle is coming again here soon,” Force said. “David Grubnic, Mac Savage and these Advance Auto Parts boys feel confident and I do too. We go straight to Dallas next and I can’t wait to get there.”

In the first round of eliminations, John Force was paired against reigning Funny Car world champion J.R. Todd. Force, in the his ‘Old Blue’ PEAK Coolant and Motor Oil / BlueDEF Chevy Camaro SS, handled his Chevy Camaro SS to a solid 3.933-second pass at 331.77 mph to better Todd’s 5.539 at 127.26 after he smoked the tires. The round win would have the racing legend facing rival and 2016 world champion Ron Capps in the quarterfinal. With almost identical reaction times, Force with a .067 light and Capps with a .069, the pair would cross the finish line only four thousandths a part. However, Force’s 3.912-second pass at 327.43 mph wouldn’t be enough to advance past Capps and his 3.908 at 329.58.

“Well, it didn’t go our way today. It was a close one but Capps got me. I’m not where I want to be in points. I’m in third and I was in second. I lost a few points but I’m 79 from the lead and there’s points and a half at Pomona next month, so I’ve got to do a better job. Have to do a better job on the tree and I’ll be working on that this week,” Force said. “Robert, he ended up winning in the Auto Club Chevy, that’s what we’re all about. Brittany moved up to third in the points with Advance Auto Parts in Top Fuel and Prock went rounds, moved to seventh.”

Rookie driver Austin Prock opened race day with a round one win over Richie Crampton when he powered his Montana Brand / Rocky Mountain Twist dragster to a stellar 3.725-second pass at 329.02 mph defeating Crampton’s 3.735 at 327.11. The first-round victory had Prock matched up with fellow rookie Justin Ashley in the quarterfinal. It was a clean side-by-side drag race where Prock would run 3.759-seconds at 328.06 mph but the third-generation racer would come up short based on reaction time to Ashley’s 3.773 at 323.58.

“We had a good car today, turned it around for race day and it put up some really good numbers but came up short on the starting line. First time I got beat on a holeshot all season and you know; it was a good one. The kids new and he was cutting great lights all weekend. He was .040 against me and my .061 so I did a good job but he did a better job,” said Prock who moved up to seventh in the points standings. “We’re going to regroup. I’ll get my stuff together and we’ll get to Dallas and try and turn on some win lights.”

The NHRA Mello Yello Countdown to the Championship continues with the fourth of six races, the AAA Texas NHRA FallNationals at Texas Motorplex in Ennis, Texas just outside of Dallas, Oct. 18-20.