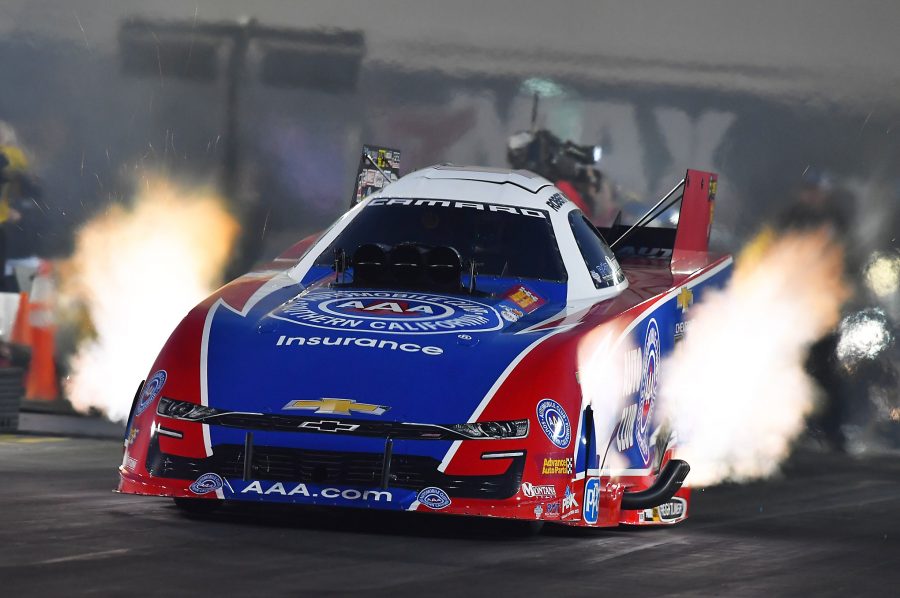 CONCORD, N.C. (April 26, 2019) — Robert Hight and the Auto Club of Southern California Chevy Camaro SS Funny Car team sit in the No. 2 spot to lead John Force Racing Friday at the NGK Spark Plugs NHRA Four-Wide Nationals. After a weather delayed afternoon that canceled most of the first session of qualifying, both the Funny Car and Top Fuel categories ran a full session Friday night under the lights.

Coming off a win at the most recent event in Houston, Hight and the Auto Club team made a 3.935-second pass despite having to lift early for a speed of only 285.11 mph.

“That run could have been an .88. I felt it pulling toward the line so I lifted early and avoided the centerline. We didn’t want to get a DNQ,” Hight said.

The entire Funny Car field struggled through the lone qualifying run with only one team making a full pull-down track after the first day of qualifying at zMAX Dragway experienced delays from both rain and wind.

“Going into tomorrow we are good. We’re sitting No. 2 and we know we have more,” said Hight who currently leads the points and has tallied three No. 1 qualifiers this season. “Jimmy Prock and Chris Cunningham will have this Auto Club Camaro ready for race day, we’ll get some more data and be ready to go some rounds on Sunday.”

Rookie of the Year candidate, Austin Prock and the Montana Brand / Rocky Mountain Twist Top Fuel dragster team made a 5.286-second pass at 133.72 mph after losing traction. Prock had to pedal his hot rod to the finish line and will start Saturday sitting in the No. 5 spot.

“It was a little bit of an odd day here in Charlotte. Had the wind cancel our first session today,” Prock said. “The car tonight, it left strong and just rattled the tires a little bit. It was a new feeling for me, I’d felt that in a Funny Car before but never in the dragster. I caught it fairly quick. I second guessed myself when I did catch it. I put my foot back down and I shouldn’t have, that’s a no-no in qualifying especially when you have two runs left. It ended up setting us up pretty well for tomorrow. Ended up fifth and we’ll be later in the pack and we’ll get to see a few race cars go down the track before us tomorrow and hopefully it will benefit our performance.”

Brittany Force and the Advance Auto Parts dragster team ran a 7.460-second pass at 82.72 mph Friday night after shaking the tires and shutting off early. The pass will put the 2017 Top Fuel world champion in the tentative number seven spot.

“We’re out here in Charlotte for some four-wide racing. We were pushing hard at that run we had today. Unfortunately, we shook and we didn’t get down there but we get two more tomorrow,” said Force. “Conditions look good and we’re hoping to move up in the qualifying ladder and get two good runs before going into race day.”

“Well, we missed out on a run from this afternoon. Makes it hard. Especially in four-wide you don’t have a lot of cars running in front of you, at least in your lane. We didn’t get the job done,” Force said. “We know NHRA works hard to keep it safe and make it good. We know they want us to run, put on a good show for the fans, but it’s gotta be safe. So, we’ll get them tomorrow. Two more runs, this PEAK team, we’ll be fine, Brian Corradi and Danny Hood have this hot rod tuned right, we showed that in Houston.”

Qualifying at the NGK Spark Plugs NHRA Four-Wide Nationals continues Saturday with sessions at 2:15 p.m. and 4:30 p.m. Eliminations are scheduled for Sunday at noon.