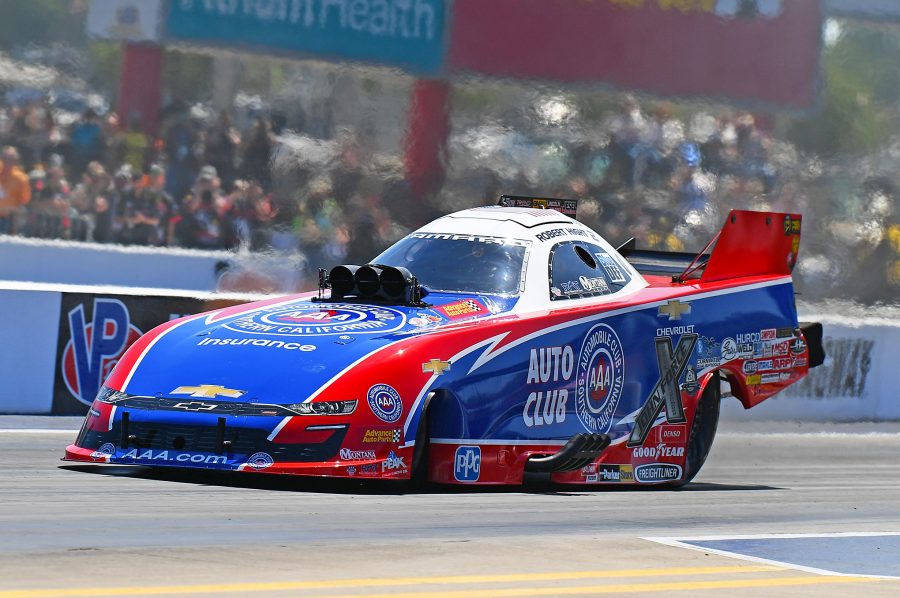 After landing in the No. 2 spot with his 3.935-second pass from Friday night, Hight and the Auto Club of Southern California team improved to a solid 3.920 pass at 328.46 mph to be quickest of the third qualifying session and earn three valuable bonus points. Entering the final qualifying session in the No. 2 spot, Hight and his Jimmy Prock and Chris Cunningham tuned hot rod laid down a blistering 3.883-second pass at 325.92 mph to take the No. 1 qualifying spot for the fourth time this season, 64th in his career and third at zMAX Dragway.

“It’s pretty amazing, 64 No. 1 qualifiers, that’s a lot but I don’t think ever in my career I’ve had a car that is this dominant, especially when you look at how competitive the class is. From 1-12 there’s only hundredths of a second separating us. It’s pretty amazing for us to be running this well. It makes my job pretty easy. You pretty much know this car is going to go down the track as long as you don’t screw it up.

“I did screw it up Friday night,” said Hight in reference to lifting early during Friday night’s qualifying pass. “We were going to run another .88 and be No. 1 but I felt like I got a little inside and I did not want to cross the center line so I lifted and ran a .92. That .88 was out there last night under stellar conditions. For us to come out and do it today when the track was 115 degrees, that’s pretty impressive.”

Hight will be chasing his third Charlotte Four-Wide victory, sixth at the facility where he is already the winningest Funny Car driver and fourth of the 2019 season. To tally the 49th win of his career, Hight will first need to battle past Bob Gilbertson, veteran Bob Tasca III and reigning world champion J.R. Todd in his opening quad.

“I’ve won it a couple times here, with the car we have right now and the format of four-wide, the first two rounds, two cars from every quad advance. When you have a car that is as dominant as mine, if I leave on time, we ought to be in the final,” Hight said. “That’s just kind of the way we look at it. We are going to work hard every run and see if we can’t get us another win. Four wins in the first six races, that’s pretty impressive.”

John Force started Saturday’s qualifying in the No. 12 position and by the end of the day improved his performance to secure the No. 3 qualifier position. In the third session Force powered his PEAK Coolant and Motor Oil BlueDef Chevy Camaro SS Funny Car to a 4.246-second pass at 220.19 mph to move up to the ninth spot. He continued to improve in the final qualifying session and ran a 3.905-second pass at 329.42 mph which earned him the No. 3 spot. The sixteen-time Funny Car world champion will match up against Cruz Pedregon, Matt Hagan and Jonnie Lindberg in the first-round quad of eliminations Sunday.

“It was a little tricky with the race track conditions yesterday. I got to see my best friend in the world, Bruton Smith and he said he’s going to grow our sport and NHRA and his race tracks, and that was really good for me. He just loves all of NASCAR and drag racing but he gave us a race track and I told him I’d get down it today and I did,” said Force. “We could have stepped on it a little bit harder and we wanted to make sure we moved up into the top and we did. We’ll see what this PEAK team can do tomorrow on race day.”

Brittany Force and the Advance Auto Parts team did not make a full pull during the third qualifying session but, like most of the Top Fuel category, improved from Friday night with a 4.325-second pass at 229.51 mph. Force started the final session from the No. 8 spot and ran a 3.757-second pass at 315.93 mph putting her in seventh. She’ll go head-to-head on race day with Antron Brown, Dom Lagana and Scott Palmer in the first round of eliminations.

“That final round, it took us all weekend long but we put a 3.75 on the board and we ended up qualifying number seven,” said Force, who is coming off a victory in Houston. “It’s not exactly where we want to be but going into tomorrow, we have a good quad going into first round and we’ll see if we can go back-to-back and get this thing back in the winner’s circle.”

Between rounds, Force participated in a home gifting ceremony with partners Advance Auto Parts and Building Homes for Heroes, an organization committed to giving mortgage free homes to injured veterans, where she broke the news to a deserving vet that they would be getting a home in Kissimmee, Fla.

“It’s been very exciting weekend here in Charlotte, we got to team up with Building Homes for Heroes and gift a home to veteran Shemeka McNair. It’s very exciting to be able to be a part of opportunities like that with all of John Force Racing and especially my Advance Auto Parts team. It was very special to have that honor and spend the day with her and her daughter.”

Austin Prock and the Montana Brand / Rocky Mountain Twist dragster team went up in smoke and shut off early in the third session of qualifying to run a 5.368-second pass at 129.48 mph. The pass put Prock in the 10th position heading into the final qualifying try. The rookie driver put a 3.782-second pass at 326.95 mph up on the board to move up two spots into the No. 8 spot for race day. Prock will start Sunday eliminations facing Mike Salinas, Cameron Ferre and Clay Millican.

“We struggled a little bit this morning, got behind the eight-ball with our run last night. The weather, that didn’t do us any favors either but we came out strong in the last qualifying session,” said Prock. “We ran a 3.78 and I know the car has a lot more in it but it was nice to get a good A to B run, something to base off tomorrow and I think we’re going to go up there and pick it up some more. Hopefully I can do my job on the starting line and make it to the finals tomorrow.”