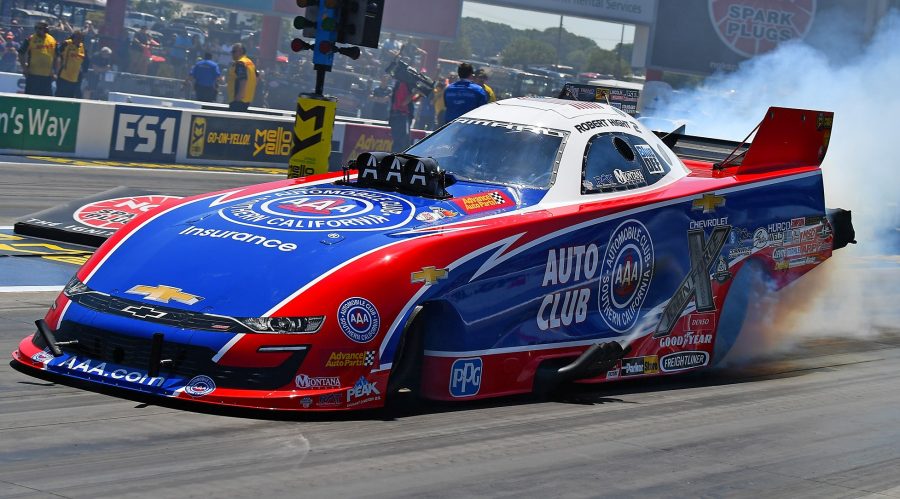 The second-round advancement put Hight up against John Force Racing team owner, John Force for the fifth time this season along with Shawn Langdon and Matt Hagan. Hight would run 4.159-seconds at 242.89 mph after spinning the tires and shutting off early. He finished runner-up only bettered by Shawn Langdon’s 4.125-second pass at 305.08 mph.

“Obviously not the result we wanted. It spun the tires hard out there and shut off. We would have won it. With the car we have, the way Jimmy Prock and Chris Cunningham have it running, all we had to do was take it straight out there,” said Hight. “I was so far ahead we could have gotten it done. We’ll take the runner-up points. We’ve got an even bigger lead now than we came in and that’s what’s most important.”

John Force began race day at zMAX Dragway with a first quad win over Matt Hagan, Cruz Pedregon and Jonnie Lindberg when he powered the Brian Corradi, Danny Hood tuned Chevy hot rod to a 3.920-second pass at 326.56 mph. In the second round, Force and the PEAK Coolant and Motor Oil BlueDef team were able to advance thanks to a 4.046-second pass at 320.81 mph and a .053-second reaction time that kept them ahead of Jack Beckman and Tim Wilkerson. Force was bettered by Matt Hagan’s 3.997.

Chasing his 150th win, Force went into the final quad against teammate and points leader Robert Hight, Shawn Langdon and Matt Hagan. Force had the quickest reaction time of the pack with .038 but at half-track started to fall behind and ran a 4.517-second pass at 200.59 mph to finish third. He was bettered by Hight’s 4.159 at 242.89 and Langdon’s 4.125 at 305.08. Although Force didn’t catch win 150, he moved up to third in the points standings.
“I was close to getting 150, but I can’t think about that. I have the rest of my life to make 150. We were close but things happen,” said Force. “I’m learning how to drive again, going through a whole change. There are a lot of things I’m learning. It’s time to get back to where I used to be.”

Austin Prock and the Montana Brand / Rocky Mountain Twist dragster team ended race day early in the first quad. Even though Prock had the second quickest reaction time with a .060 light, he ran a 4.224-second pass at 250.13 mph after smoking the tires in a pedalfest to the top end to finish third in the quad. He was bettered by Clay Millican and Mike Salinas but out ran Cameron Ferre.

“I was excited this morning going into race day. I had a good feeling, made a good pass last night and conditions were really similar to our last qualifying session yesterday as this morning. Put it all back the same and we just didn’t repeat,” said Prock. “I got out right at about the 330-foot mark and let the tires loose, pedaled it to run a 4.22 and just got beat. I had a good light and we’ll move onto Atlanta.”

Like teammate Prock, Brittany Force and the Advance Auto Parts team also ended race day earlier than planned. Force started the pass with a good light but ran into trouble down the track when the fuel pump broke. She ran a 5.495-second pass at 102.18 mph but it wasn’t enough to advance against Scott Palmer and his 3.782 at 325.61 and Dom Lagana’s 3.796 at 320.51. Antron Brown also did not advance with his 4.161 pass at 276.92.

“Tough weekend for this Advance Auto Parts team out here at the Charlotte Four-Wide. We only really got down there once in qualifying and we lost a run due to weather conditions, and today we were on a good run but just one in a million, it was the fuel pump. It shut the car off on the run and I just had no power probably 500 feet on,” said Force. “We got beat but overall, this is Advance Auto Parts home track and all the Advance family was out here today. We worked with Building Homes for Heroes yesterday and gave a home away to a U.S. veteran. It was a good weekend and we pack up and go right to the next one in Atlanta.”

The John Force Racing team heads to the Arby’s NHRA Southern Nationals at Atlanta Dragway in Commerce, Ga. next weekend, May 3-5 for the seventh event on the NHRA Mello Yello Drag Racing Series season schedule.