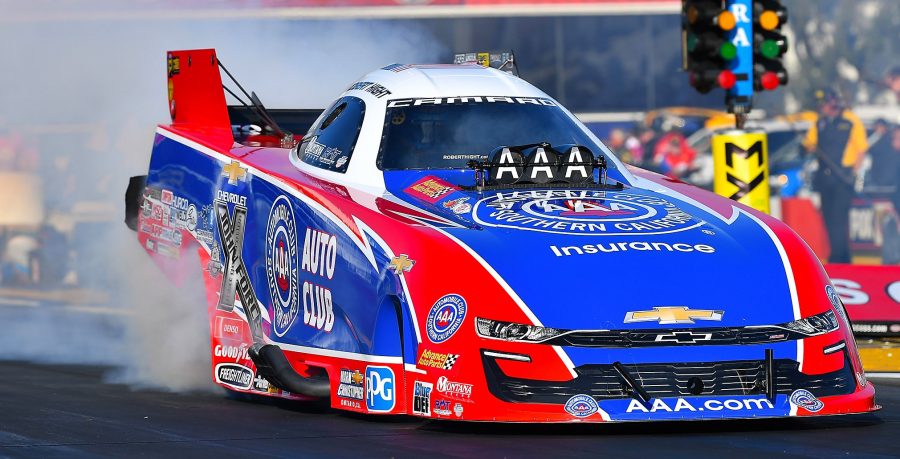 Coming off a recent win at the NHRA Heartland Nationals, Hight and the Auto Club team have a stronghold on the Funny Car class. The two-time world champion now has four wins under his belt in the first ten events including the season opening Winternationals, 50th anniversary Gatornationals and the SpringNationals where he doubled up with Brittany Force. He also has two runner-up finishes and six No. 1 qualifiers, all of which have kept him in the NHRA Mello Yello points lead, a lead he has yet to relinquish all season long.

At the recent event at Heartland Motorsports Park, Hight was sitting in the No. 13 spot heading into the final qualifying session before making a 4.015-second pass at 318.32 mph to land the No. 9 qualifier. On race day, Hight powered his Jimmy Prock and Chris Cunningham tuned Chevy Camaro through four consistent rounds to ultimately take the win light over Jack Beckman in the final. It marked his fourth win of the season and 49th of his NHRA Mello Yello career, tying him with Don “Snake” Prudhomme for 13th on the all-time list.

“We didn’t have the best of luck during qualifying in Topeka but we were able to make things happen on Sunday and get this thing in the winner’s circle,” said Hight. “Jimmy Prock, Chris Cunningham and the Auto Club guys, they were all working hard through the hot weather and track conditions and they got it done on race day. We’re off to Bristol next and I’m excited to see if we can make it happen there again.”

Hight has won at Bristol Dragway once in his career in 2011 and has made a habit of qualifying well at the famed Thunder Valley. In the last five years, Hight has qualified inside the top five a total of four times, including a No. 3 spot last season when he went onto have a quarterfinal finish.

“I’ve only won once in Bristol so I’m looking forward to getting back there and doing better than we did last year,” said Hight. “It’s also Father’s Day weekend and my daughter, Autumn is here. It would be really special to get another win with her.”