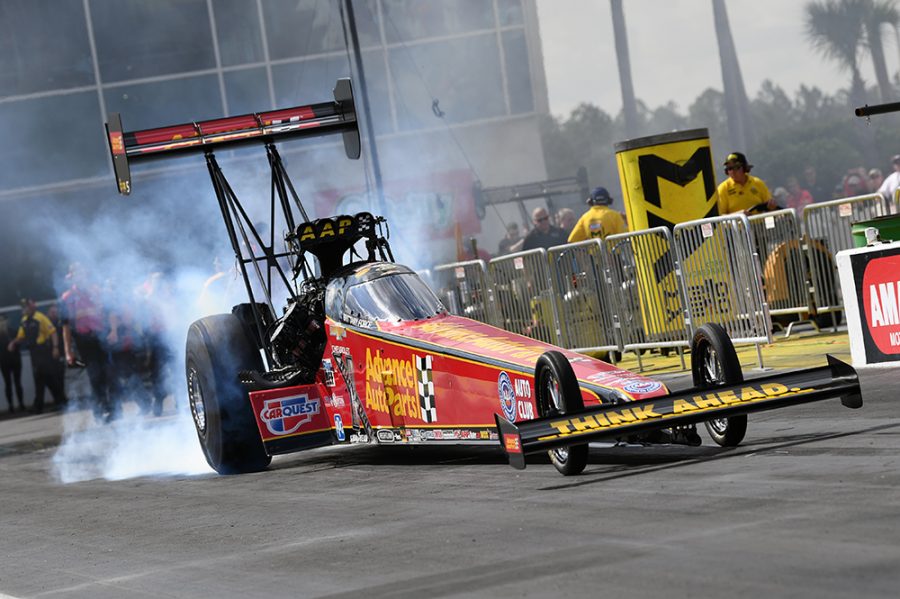 BRISTOL, Tenn. (June 12, 2019) — Brittany Force and the Advance Auto Parts Top Fuel dragster team are heading to the NHRA Thunder Valley Nationals on an upward swing as they enter the 11th event on the NHRA Mello Yello Drag Racing Series third in the points standings.

After a series of first-round losses, Force and her David Grubnic and Mac Savage tuned Advance Auto Parts dragster picked-up an impressive first round win Sunday at the NHRA Heartland Nationals laying down a 3.69-second pass that has the team feeling optimistic for the remaining two races in the grueling four-in-a-row.

“I’m excited to get to Bristol. I’ve never won the race. This team, we’re finally turning a corner. We’d been struggling the last couple races but last weekend in Topeka we put a 3.69 on the board and I feel like we are definitely finding our footing moving into the next few races,” Force said.

So far this season Force has landed the Advance Auto Parts dragster in the No. 1 qualifying spot three times, each time alongside a John Force Racing teammate in the Funny Car top spot. At the historic 50th anniversary Gatornationals and the NHRA Southern Nationals, Force shared the green hat with John Force Racing President Robert Hight. In Houston, she and her father, John Force, made history as the first parent-child duo to sweep No. 1s in the professional categories. Brittany went onto win the NHRA SpringNationals at Houston Raceway Park alongside Hight. It was the third time Force and Hight had double-up wins.

While Force has never won at Bristol Dragway on Father’s Day weekend, she still calls the event her favorite on the circuit and this season she has a special surprise for the man who is responsible for her career.

“Thunder Valley, there’s nothing like it, it’s my favorite on the circuit. It’s always special because it always falls on Father’s Day,” Force said. “My dad doesn’t know but I have something special for him. Just a gift I want to give him to let him know how much I appreciate him and everything he’s done; everything he’s taught me. I think he’s going to be blown away by it. It’s going to be pretty cool.”