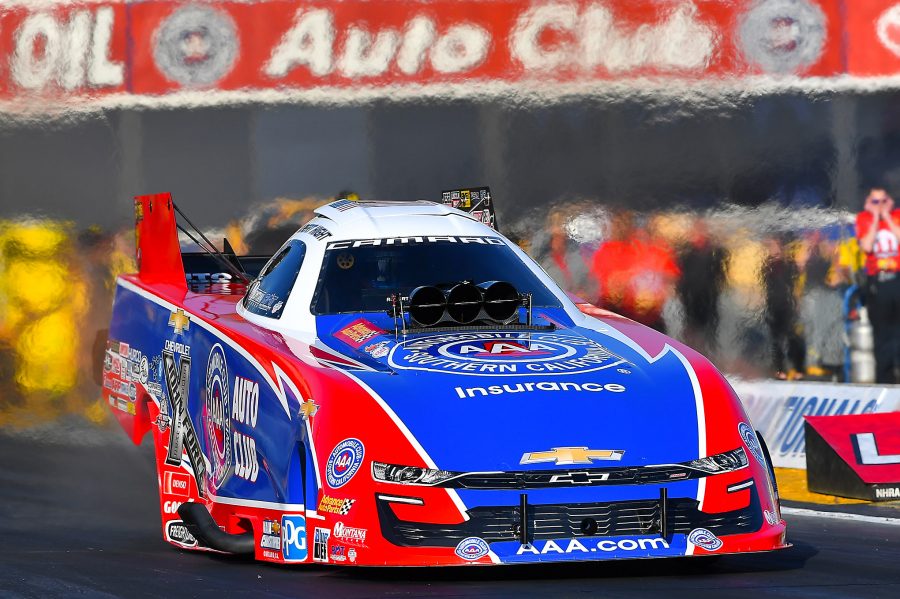 POMONA, Calif. (Feb. 8, 2019) — Robert Hight and the Automobile Club of Southern California team ended day one of the season opening Lucas Oil NHRA Winternationals at the top of the Funny Car field Friday at Auto Club Raceway at Pomona. Austin Prock held his own in his Top Fuel debut with his Montana Brand / Rocky Mountain Twist team ending the evening in the eighth spot. The father daughter duo of 2017 Top Fuel world champion Brittany Force and 16-time Funny Car champion John Force are in 10th and 11th respectively in their categories.

Hight and his Auto Club Chevy Camaro started the day running 4.338 seconds at 269.40 mph after shaking the tires down track and shutting off early. Confident in his crew chief duo of Jimmy Prock and Chris Cunningham, Hight came out the second session to lay down an impressive 3. 871-second pass at 329.67 mph to land in the preliminary No. 1 qualifying spot.
“The first run we didn’t make it down under power. We had a good test session in Phoenix a week ago and came in here with the same set up. We just needed to make a few tweaks and changes. They got it on the second run and, honestly, I think there is more power in this Auto Club Camaro. (Crew chief) Jimmy Prock is pretty enthused about it. I shut it off a little early and it had a cylinder out. If we can get the same conditions tomorrow, I think we can go two or three hundredths quicker.”

Hight is chasing the 61st No. 1 qualifier of his career and fourth at the NHRA Winternationals and Auto Club Raceway at Pomona where the NHRA Mello Yello Drag Racing Series both open and closes it’s 24-race season.

Austin Prock began his Auto Club Road to the Future NHRA Rookie of the Year campaign with a pair of solid passes during Friday’s qualifying. Prock, who is also licensed in Funny Car, was first on track for the nitro categories lining up his Montana Brand / Rocky Mountain Twist dragster for a solo run. The John Force Racing Next Generation driver did not disappoint as he piloted his way to a 3.784 at 323 mph.04 under the tuneage of Jon Schaffer and Ronnie Thompson. In the second session Prock improved to a 3.771 at 326.63 mph for his No. 8 standing.

“We had a great day today at my first national event. Jon Schaffer and Ronnie Thompson did an outstanding job tuning this Montana Brand / Rocky Mountain Twist dragster. We improved each run and broke into the 3.70s today. I’m excited and feeling good,” Prock said. “I am looking forward t.o tomorrow and hopefully we can pick up a couple more spots and get after it for Sunday.”

Brittany Force showed off her new colors in the Advance Auto Parts Top Fuel dragster running a 3.849-second pass at 305.01 mph in the first qualifying session that landed her the current No. 10 spot after losing traction early during the second qualifying session. The Friday showing isn’t anything Force is hanging her about, though. In addition to a new sponsor, Force is running with a new team headed by David Grubnic and Mac Savage and new parts now made in-house at the Force American Made machine shop in Brownsburg, Ind. Following a successful testing session in Phoenix, Force is looking towards the rest of the weekend, and season, with an optimistic view.

“It’s Pomona, the first race of the season and I’m excited to be out here. We’ve had some big changes at John Force Racing this season. I’m proud to be with my new sponsor Advance Auto Parts and we have a whole new team with David Grubnic and Mac Savage,” said Force. “We made two runs today and we aren’t exactly where we want to be. We tested in Phoenix and we expected to have to figure some things out this weekend. We’re trying to fine tune this Advance Auto Parts dragster and we’re moving from Alan Johnson Racing parts to John Force Racing parts so it might take a while to get an awesome tune up. The good news is, I have a great group of guys behind me and we will work together to figure this out.”

Racing his PEAK Coolant and Motor Oil Chevrolet Camaro SS, John Force sits in the 11th qualifying position after his first session run of 4.101-seconds at 330.23 mph, which held up as fastest of the day in both nitro categories. In his second qualifying try, Force ran 4.271-seconds with a speed of 214.42 mph but the winningest driver in NHRA history is all smiles after a long off-season that brought on changes throughout John Force Racing.

“My old hot rod went down there one run and I had to pedal it. It still ran 331 mph pedaling it and it only ran 4.10. It’s going to be fast so we will see where it goes,” said Force. “Brittany is doing well in that Advanced Auto Parts dragster with Grubnic and Savage and she is in the show. Robert Hight over there in that Auto Club Chevy is low. Jimmy Prock always makes the car fly working with Chris Cunningham. This just shows how all the work over the off season is paying off and with the work we did at testing in Phoenix.

“In the middle of all this trying to put it all together it is really tough some times. We made the decision to go to three cars but that young Prock kid, I promised him two years ago I would get him a ride, and I like to keep my word,” Force continued. “Robert got a call from Snake (Don Prudhomme) who was at Barrett Jackson and he said he wanted to help us and he made the introduction to Frank Tiegs, a great guy and he is an entrepreneur. It is just amazing it came together. The marketing team, Kelly Antonelli, our graphics team, Brandon Baker, Simpson, getting our awnings and wraps done overnight, it’s just amazing and I have to really thank everyone involved.”

Qualifying at the Lucas Oil NHRA Winternationals at Auto Club Raceway at Pomona continues Saturday with two final sessions at 12:30 and 4 p.m. Catch the action live at 7 p.m. ET on FOX Sports 1 (FS1).