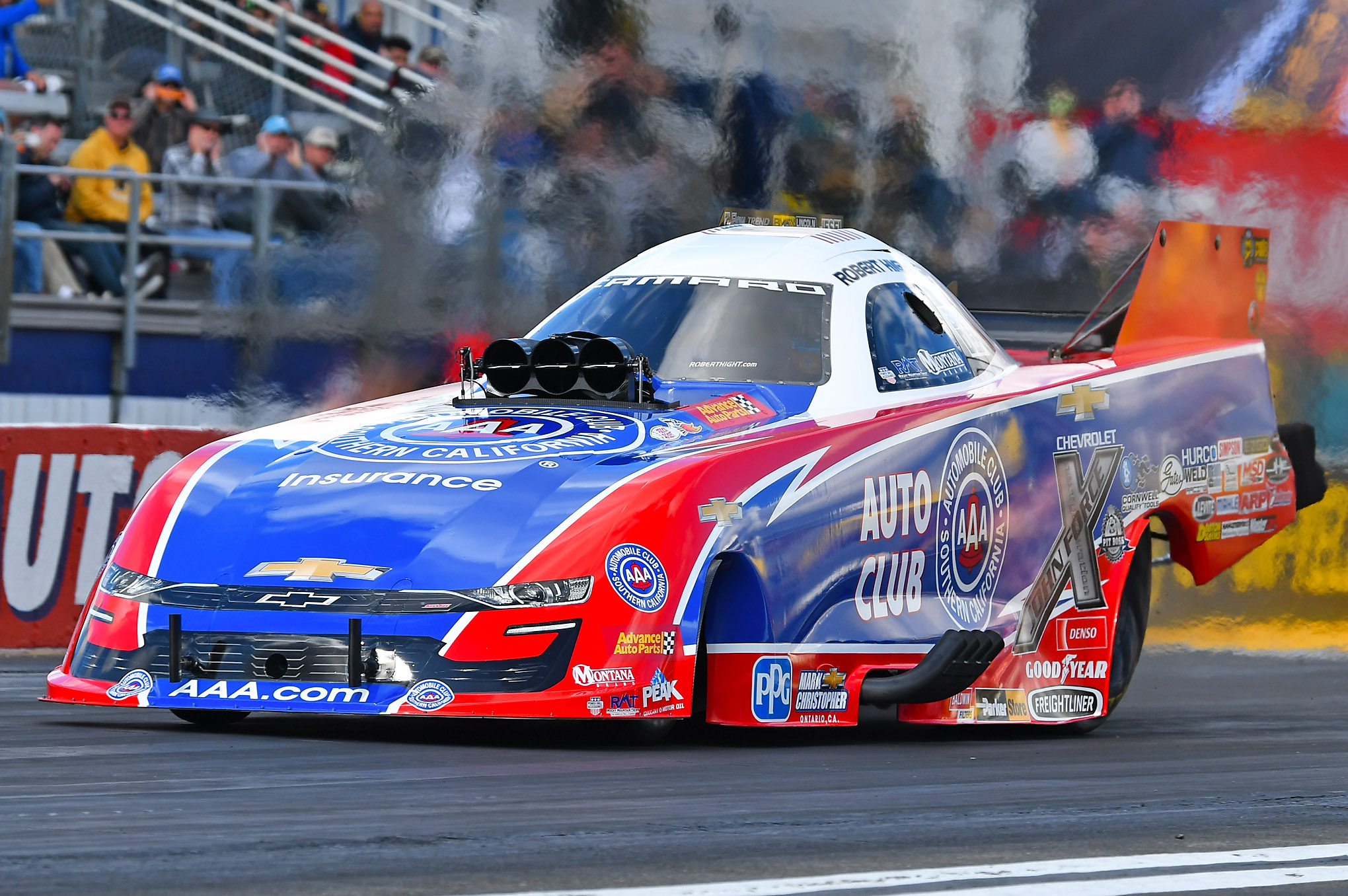 POMONA, Calif. (Feb. 9, 2019) — Robert Hight and the Automobile Club of Southern California Funny Car team secured their 61st career No. 1 qualifying position Saturday at the Lucas Oil NHRA Winternationals, the Mello Yello Drag Racing Series season opening event at Auto Club Raceway at Pomona in Pomona, Calif. Team namesake John Force is in the show at the No. 13 spot in his PEAK Coolant and Motor Oil Chevrolet Camaro SS. In Top Fuel Brittany Force improved to the No. 4 qualifying position with Austin Prock landing in the No. 11 spot for his first professional start.

Off the efforts of his 3.871 second pass at 329.67 mph from Friday afternoon, Hight will start from the No. 1 spot for the third time at the Winternationals. Hight and the Auto Club team overpowered the track both runs on Saturday with a less than cooperative race track under their Goodyear tires.

“My car on the first run today, if it would have stuck going over that bump, it probably would have run 3.83 or 3.84. The numbers to the 330 were really, really good. We hit the bump and not a lot of spray out there and it came loose. The Funny Cars need a little better track prep. When you run at the back with how they are spraying 50/50 glue combination, there is not much glue left there. We have to do a better job because really it is all about putting on a show for the fans and that is what we need to be doing a better job of.”

Despite the lack of a good show on Saturday, Hight is assured that his crew chief tandem of Jimmy Prock and Chris Cunningham will be set for Sunday eliminations where they’ll face Terry Haddock in the first round.

“We want to show all these guys we know what we are doing. Jimmy Prock and Chris Cunningham worked hard over the winter. They figured out some of the things we did wrong in the Countdown. Testing went well and so far so good here. It is going to take four rounds on Sunday to see where we are at and how we stack up to the competition.”

Hight is 2-0 against Haddock, both times defeating him in the first round, most recently in 2016 at the Gatornationals. Despite those favorable numbers and the addition of a certain racer in the Top Fuel ranks, crew chief Jimmy Prock’s son, Austin, Hight isn’t concerned about Jimmy Prock’s focus for race day.

“Austin (Prock) is going to be good. Jimmy is very excited and he is showing some interest in that dragster. But I believe you could set the trailer on fire and Jimmy wouldn’t know it because he is so focused on tuning my race car. I am not kidding when Austin and Thomas, his sons, used to be little they would be running around tearing up stuff and he didn’t notice a thing.”

Coming into Saturday in the No. 10 spot, Brittany Force and the Advance Auto Parts team drastically improved their positioning with a 3.696-second pass at 325.37 mph putting her in the No. 1 at the end of three sessions. During the final qualifying session where she lined up as the last pair of dragsters, Force had to shut off early slipping to the No. 4 position.

“I am looking forward to race day tomorrow. We qualified pretty well. We had some decent runs. Good runs,” said Force. “We’re lined up with my new teammate Austin Prock so its going to be an exciting day. I have to give a big thanks to my crew chief David Grubnic, Mac Savage and the whole Advanced Auto Parts team. I’m looking forward to tomorrow. It’s the first race of the season and we’re hoping to end this one in the winner’s circle.”

Austin Prock, racing his Montana Brand / Rocky Mountain Twist Top Fuel dragster, continued to run in the 3.70s on Saturday. In the third session, Prock had a 3.767-second pass at 324.75 mph which gave him his No. 11 standing. Prock had to shut off after shaking the tires at the hit in the final session. The consistent showing has Prock looking into Sunday with excitement as he is set to go head-to-head with teammate Brittany Force and the Advance Auto Parts dragster.

“We had another solid day today in the Montana Brand / Rocky Mountain Twist Top Fuel dragster. We had another career best. We ran 3.76,” said Prock. “That second lap on the track was real tricky out there. We got out on the other end of it and we had a fast shake. Our 60-foots were a little down all weekend and we tried picking it up and getting on the other side of it and it knocked them off, but I’m really proud of everyone on this team. Jon Schaffer and Ronnie Thompson are doing a great job and we should be a contender tomorrow.”

John Force started Saturday qualifying in the No. 11 spot with his 4.101-second pass during Friday’s first session. Force had to pedal his PEAK Coolant and Motor Oil Chevy during Saturday’s opening session to coast to a 4.242. In the final session, Force shook the tires off the line and was unable to improve landing him in the No. 13 position. The 16-time champion isn’t dwelling on the qualifying performance as he chases his 150th NHRA victory. He’ll begin the hunt against Matt Hagan who he has a winning record against of 22-17.

“Champion versus champion. He (Hagan) is a good man and a good racer. Dickie Venables is really good but my guys are pretty good too with Brian Corradi and Daniel Hood. We are going after them with this PEAK Chevrolet,” said Force. “I’m going after 150. My goal is to get that win and more. I know it will happen. This car is going to be fast. Its early numbers are fast. They’re probably having to carry my weight and I’m probably 50 pounds heavier than Courtney or better. They lightened it in a lot of places and we will see how it goes tomorrow. I will be ready.

“Everybody got qualified at the opening race. Brittany is going to race Austin Prock in the first round and that will be exciting. We got everything together for all our teams and we have to thank our vendors,” continued Force.

Eliminations at the Lucas Oil NHRA Winternationals at Auto Club Raceway at Pomona are set to begin at 11 a.m. with the finals airing live on FOX Sports FS1 at 5 p.m. ET.