ROBERT HIGHT AND AUTO CLUB SECURE THIRD NO. 1 OF THE SEASON AT AUTO CLUB NHRA FINALS 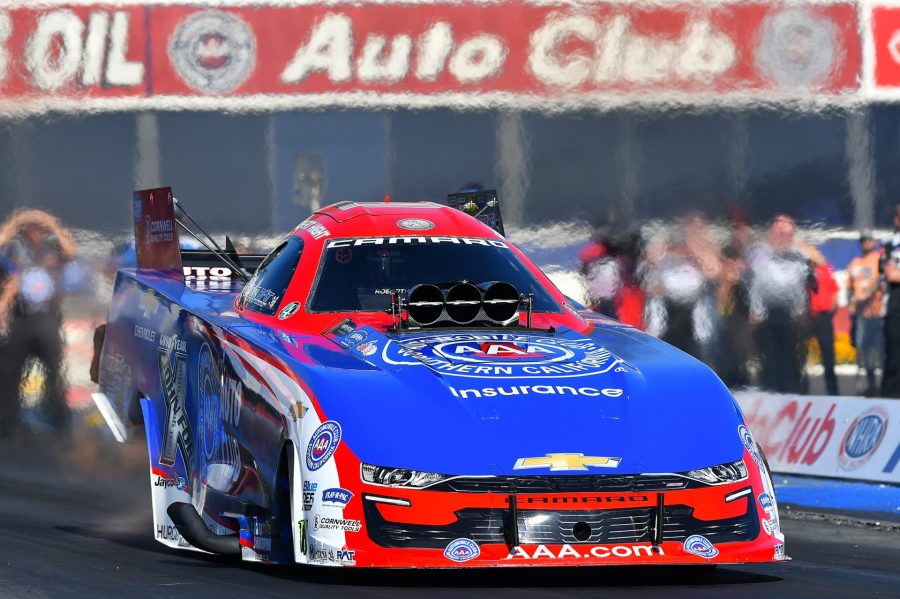 POMONA, Calif. (Nov. 13, 2021) – Robert Hight and the Automobile Club of Southern California Chevrolet Camaro SS Funny Car team secured the No. 1 qualifying position Saturday at the Auto Club NHRA Finals at Auto Club Raceway at Pomona. John Force and the PEAK Antifreeze and Coolant #PEAKSquad Chevy are heading into race day No. 5 while Brittany Force with the Monster Energy / Flav-R-Pac dragster are No. 13.

Entering the day already in the No. 1 spot, Robert Hight and the Auto Club Chevy stayed consistent throughout qualifying starting with a solid 3.951-second pass at 322.81 mph in the heat of the day Saturday afternoon. Coming into the final qualifying session, Hight and the Jimmy Prock and Chris Cunningham led Auto Club team laid down a stellar 3.886-second pass at 329.34 mph to solidify their third No. 1 of the season, 71st of his career.

“Jimmy thought it could run .88 or .87 and it did exactly that. The left lane is a little tricker, so good job to my Auto Club guys for getting it down the left lane. This is probably the best car I’ve had all year going into race day,” said Hight who lines up with Jim Campbell first round. “You can just tell it by the way Jimmy Prock is in the staging lanes. He was very confident when he made some changes and the car responded. It’s pretty exciting. Unfortunately, it’s a little too latee We want to be here fighting for a championship, but we want to win this race, see where it all shakes out and come back strong next year, really that’s what I’m looking forward to.”

John Force and the #PEAKSquad Chevy had a promising pass of 3.971-seconds and 324.12 mph during the second qualifying session when the track temp would be closest to race day. In the final session, Force would go 4.084-seconds at 293.47 mph with a little fire at the end of their run. They’d shift into the No. 5 position off of their Friday night 3.939-second pass at 328.14 mph.

“Kept things a little exciting today. Not a bad run in the heat, has this PEAK Chevy looking good for tomorrow,” Force said. “Caught on fire there on that last run. A little work for the guys tonight but I’m just excited to be out here. Even when I’m on fire I’m happy to be driving and out here running with these young kids. We’ll just see how tomorrow goes.”

Brittany Force and the Monster Energy / Flav-R-Pac team ran into more tire smoke in their second qualifying try early Saturday afternoon. After blowing the tires off at the 330-foot mark, the Monster Energy dragster coasted to a 5.987-second pass at 106.74 mph. The David Grubnic and Mac Savage tuned Top Fuel dragster had to get down the track on the final qualifying session in order to ensure qualifying and keeping their championship hopes alive. They did just that going 3.784-seconds at 328.30 mph to shift from No. 17 to No. 13 to race Billy Torrence in the first round.

“This weekend was a little bit of a challenge. Coming into Pomona, the last race of the season, with everything on the line. We didn’t get down the track in the left lane in session one and two but this Monster Energy Flav-R-Pac team turned it around in session three and got in the show,” Force said. “We were originally bumped out, got back in and moved up to 13 and we face Billy Torrence tomorrow. We’re looking to finish strong and win this thing.”

Eliminations at the Auto Club NHRA Finals at Auto Club Raceway at Pomona are slated for Sunday at 10 a.m. Television coverage of the final event in the 2021 NHRA Camping World Series season will be on Sunday with a qualifying show at 2 p.m. ET and finals show following at 4 p.m. ET on FOX Sports 1 (FS1).