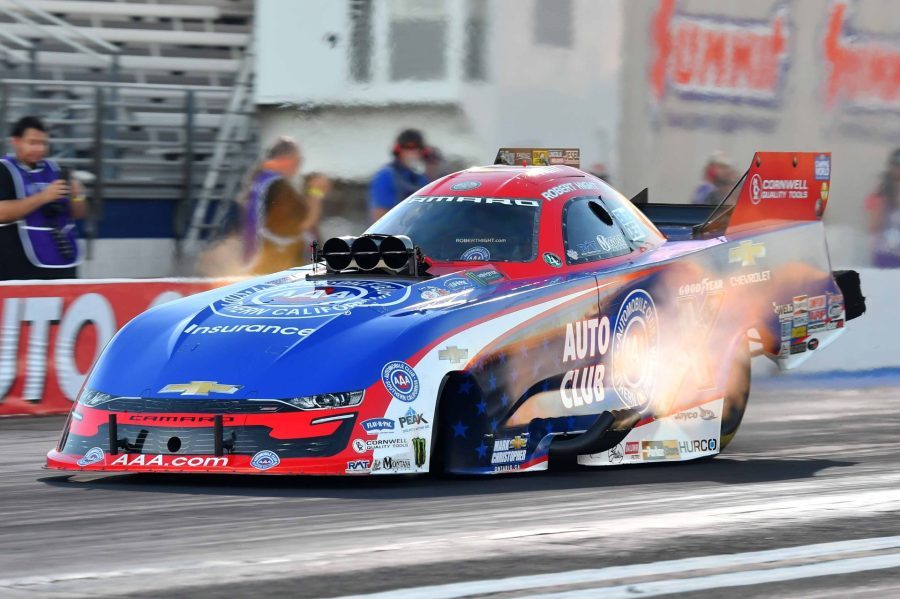 POMONA, Calif. (Nov. 12, 2021) – Robert Hight and the Automobile Club of Southern California Chevrolet Camaro SS Funny Car team landed the provisional No. 1 qualifying position Friday evening at the Auto Club NHRA Finals at Auto Club Raceway at Pomona. John Force and the PEAK Antifreeze and Coolant Chevy Camaro are No. 3 while Brittany Force and the Monster Energy Top Fuel team are No. 11.

Hight handled the Auto Club Chevy to an impressive 3.894-second pass at 330.55 mph to be quickest and fastest of the Funny Car session. The Auto Club team is looking for their third No. 1 of the season 71st of Hight’s career as they chase their third win of the season.

“It’s kind of bittersweet because we all know in our camp that this Auto Club Chevy is capable of doing this every single race. We’ve had a lot of ups and downs, not much consistency. Jimmy [Prock] said if it went it was going to go 3.89, so he’s got a good handle on it. All we can do from here on out is try to win this race. The Auto Club Finals is the race you win and celebrate for the longest period. It sets the tone for the off season,” Hight said. “I told my guys this morning: This isn’t much fun. The last three years that I’ve been here to Auto Club Raceway I’ve been in contention for a championship, and I’ve finished one, two and one. To be here this year and not be in contention, this isn’t where we want to be next year. So, remember this feeling and let’s make sure we’re not in this position next year at this time.’”

John Force, running a specialty #PEAKSquad hood, earned one bonus point for his 3.939-second pass at 328.14 mph that landed him in the No.3 spot.

“Not bad. Definitely what we need to keep ourselves in this hunt, we’ll build on it tomorrow. Trying to finish the best we can and have some fine while we’re doing it,” Force said. “Speaking of, had TikTok star Daniel Mac out here today with PEAK, man he’s really famous. And we have 100 fan names on our #PEAKSquad hood. Really going to be a great last race of the season. Going to take it one run at a time and maybe we’ll get lucky.”

Chasing their second Top Fuel world championship, Brittany Force and the Monster Energy team ran into tire smoke down track to only run 4.446-seconds at 172.87 mph and land No. 11.

“Not exactly how this Monster Energy / Flav-R-Pac team wanted to start. That left lane is tough, we went up in tire smoke and didn’t get down there. A lot of competitors did the same thing we did,” Force said. “We get two more tomorrow and we’re going to try to step it up and improve. It’s the last race of the season, it’s my home track and we want to win this thing.”

The Auto Club NHRA Finals at Auto Club Raceway at Pomona qualifying continues Saturday with two sessions at 12:30 and 4 p.m. Eliminations are slated for Sunday at 10 a.m. Television coverage of the final event in the 2021 NHRA Camping World Series season will be on Sunday with a qualifying show at 2 p.m. ET and finals show following at 4 p.m. ET on FOX Sports 1 (FS1).