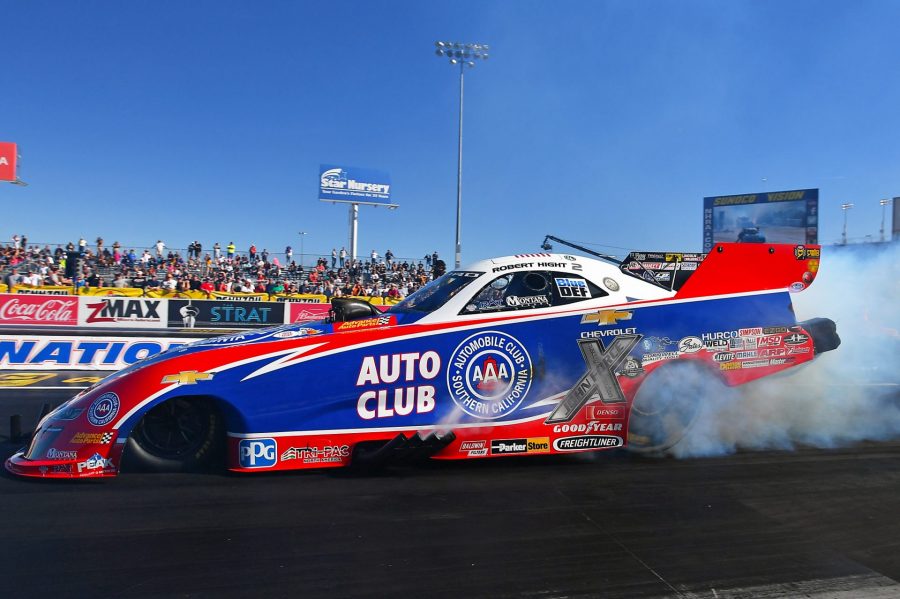 POMONA, Calif. (Nov. 13, 2019) — When regular season champion and points leader Robert Hight gets behind the wheel of his Automobile Club of Southern California Chevrolet Camaro SS this weekend for the season finale Auto Club NHRA Finals at Auto Club Raceway at Pomona, he’ll be fighting for his third Funny Car championship title and with a 46-points lead.

Since the beginning of the season, the crewman turned world champion has been a force to be reckoned with. He led the points through 18 consecutive events, secured the regular season championship for the first time in his career, raced his way to a career-best six wins including a milestone 50th career victory at the Sonoma Nationals, finished runner-up twice and picked up eight No. 1 qualifiers. He’s also padded the NHRA history books twice this season at the 50th annual Gatornationals and the Southern Nationals when he became the first driver since 1987 to be No. 1 qualifier at three back-to-back events, then was recognized as the first since 1987 to hold the top spot in five of the first seven events.

“This Auto Club Chevy Camaro team has had an incredible season. Jimmy Prock, Chris Cunningham and all of my guys, this championship is what we’re all going for, we missed it by that much last season which makes us want it even more. Vegas wasn’t what we hoped for but we had a great race car and we’re still in the points lead which gives us a lot of confidence,” said Hight. “It’s the final race of the season this weekend and with points and a half, anything can happen. I think its really going to come down to race day and this Auto Club team is ready.”

Throughout the Countdown to the Championship Hight has dominated the Funny Car class. He’s qualified in the top five three times, raced to two semifinals and picked up one win, only trailing in the points once at the opening event in Reading, Pa. He owns the most Countdown wins by any Funny Car driver with 12 and when he goes to Auto Club Raceway at Pomona this weekend, will be competing to become the first driver to earn a championship after starting the Countdown to the Championship from both the No. 10 spot, as he did in 2009, and the No. 1 spot.

“We’re in Pomona this weekend and it’s the final race of the season. There’s added excitement because it’s a home race and a sponsor race with Auto Club so it’ll be busy but it will keep me focused and keep me from getting too much inside my head. I’m hoping we can add another win to our resume and get that championship title again for Auto Club,” said Hight who has four wins, three No. 1 qualifiers at the facility and owns the track speed record of 336.99 mph. “Last year was so close and it went down to the last day and I think that’s going to be the case this weekend too, down to the final pass. This Funny Car class is so tight and so competitive, and anything can happen but we’re all ready to take on the challenge.”