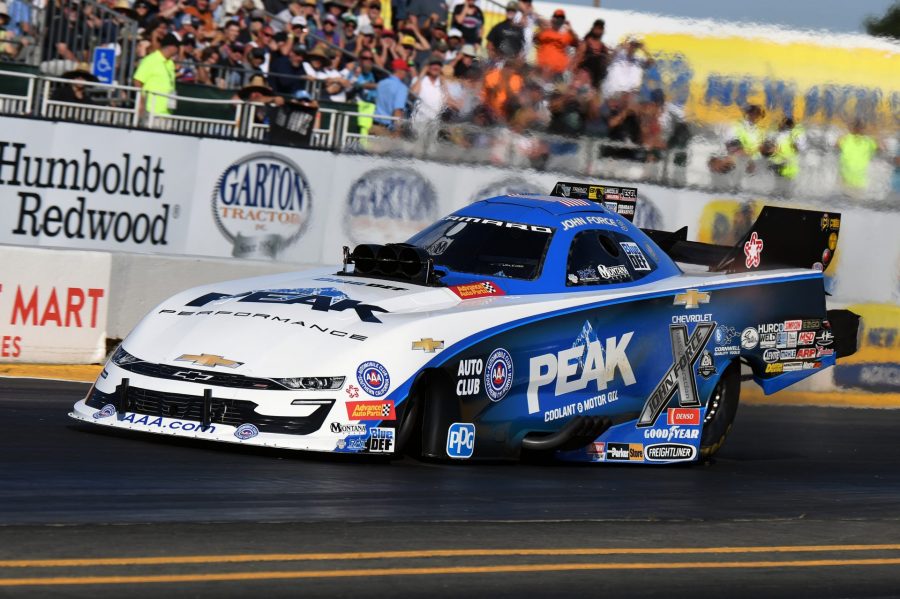 POMONA, Calif. (Nov. 13, 2019) — Sixteen-time Funny Car world champion John Force and the PEAK Coolant and Motor Oil Chevrolet Camaro SS team may be trailing 72 points behind teammate and points leader, Robert Hight but that isn’t stopping the most decorated driver in NHRA history in his quest for an unparalleled 17th Funny Car title this weekend at the season-ending Auto Club NHRA Finals at Auto Club Raceway at Pomona.

With two wins this season including a historic 150th career victory at the Northwest Nationals and a bucket list win at the U.S. Nationals that tied him with Ed McCulloch for most Funny Car wins at an event, two runner-up finishes, and five No. 1 qualifiers, Force has not only added to his already monumental resume but with the help of his 11,000-horsepower machine, has put himself in contention for a 17th world championship title.

“Well, we’re heading into the last event of the season. We have points and a half up for grabs at this event, like Indy, and anything can happen but this ‘Old Blue’ PEAK Chevy Camaro has been a great race car all year. It’s a fast hot rod and Brian Corradi, Danny Hood, Tim Fabrisi and all the young guys on my team, they’ve worked really hard to give me the best car out there,” said Force who made NHRA history twice this year alongside daughter Brittany Force when the pair qualified No. 1 together making them the first parent-child duo to clinch the top spots. “I love being in this car. Doing what I get to do and being out there with all the fans and with our sponsors, it makes me feel alive.”

Force makes his way to Auto Club Raceway at Pomona not only as the winningest driver in NHRA history but as the leader of the Funny Car class in most wins and No. 1 qualifiers at the facility. He has a total of 16 in each, more than anywhere else on the Mello Yello circuit including eight at the Finals. In 2013, the last time he won the championship title, Force qualified first and had a runner-up finish at the Finals but with a 140-points lead over Matt Hagan, was able to hold on for the most sought-after title.

“I’m ready to get to Pomona. It’s a home track for John Force Racing. We’re just up the freeway in Yorba Linda and we’re excited to get there. It’s one of our main sponsors’ events too with Auto Club so it will be a good weekend to be there with them and hopefully win a championship or two with them and with all our sponsors,” said Force. “I’m really proud of Robert, Brittany and the Prock kid. Proud of all the crew guys and everyone that keeps us going in our office here and in Brownsburg. We’ll see how this weekend goes.”