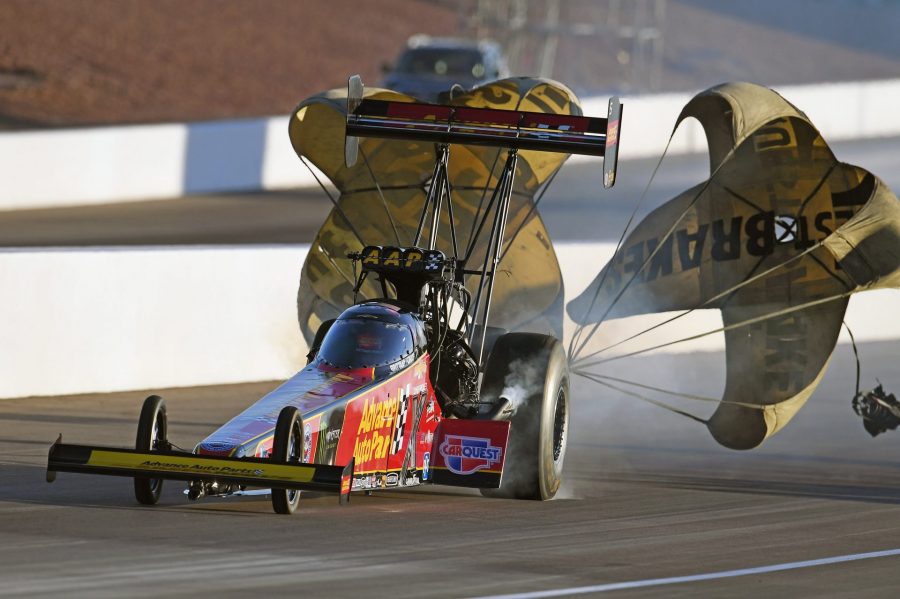 POMONA, Calif. (Nov. 13, 2019) — Two years ago, Brittany Force rode a wave of momentum into Auto Club Raceway at Pomona after winning two of the first five races in the NHRA’s Countdown to the Championship and earning runner-up honors in a third. Entering the season-ending Auto Club NHRA Finals, she trailed Steve Torrence by a mere 20 points in her bid to become the first woman in 35 years to win the NHRA Mello Yello Top Fuel championship.

She responded by qualifying No. 1, setting the track record, winning the race and joining Shirley Muldowney as the only other woman to win the sport’s ultimate prize. Since then, she has changed crew chiefs, crews, engine and drivetrain components and her primary sponsor. Nevertheless, just because everything has changed doesn’t mean anything is different.

In fact, Force returns this week to her home track for the 55th renewal of the Auto Club NHRA Finals trailing Torrence by just 16 points in a David Grubnic and Mac Savage-tuned, John Force Racing-equipped, Advance Auto Parts-sponsored dragster that has proven itself to be the current T-Rex of Top Fuel.

“I’m very confident going into Pomona this weekend with this Advance Auto Parts team and chasing down the 2019 championship. I’m lucky to have David Grubnic and Mac Savage in my corner and the eight other guys around me who are the most dedicated, hard-working guys I know,” said Force. “We really turned a corner at the right time and we’ve made some big moves this season. The start of the Countdown, at Reading, that seemed to be the turning point for us. We set the National ET record, qualified No. 1 and made a semifinal round appearance. Charlotte, we qualified top 3 and made another semifinal around appearance. Now, there’s only one race left and we are looking to finish this year off with a championship.”

The second youngest of racing legend John Force’s four daughters, Brittany has started from No. 1 eight times this season, has run quick time of the event on 10 occasions and has raced to top speed of the meet seven times. All are category bests.

Now, coming off a victory two weeks ago at Las Vegas and after becoming the first Top Fuel driver since Tony Schumacher to simultaneously hold the NHRA performance records for time (3.623 seconds) and speed (338.17 miles per hour), Force is poised to become just the 10th driver in Top Fuel history to win multiple championships.

“Vegas was a big weekend for our Advance Auto Parts team. We moved up to second in points and came home with our second win of the season but every year, the competition gets tougher and tougher,” said Force. “The biggest difference this time around is I’ve been in the hunt for a championship before so I have a better idea of how to deal with the pressure.

The key to this season has been the support system I have around me. I have an incredible crew chief, David Grubnic and I work with some of the best guys,” continued Force. “I’m proud to be in the fight with them and wouldn’t chose anyone else going into Pomona.”