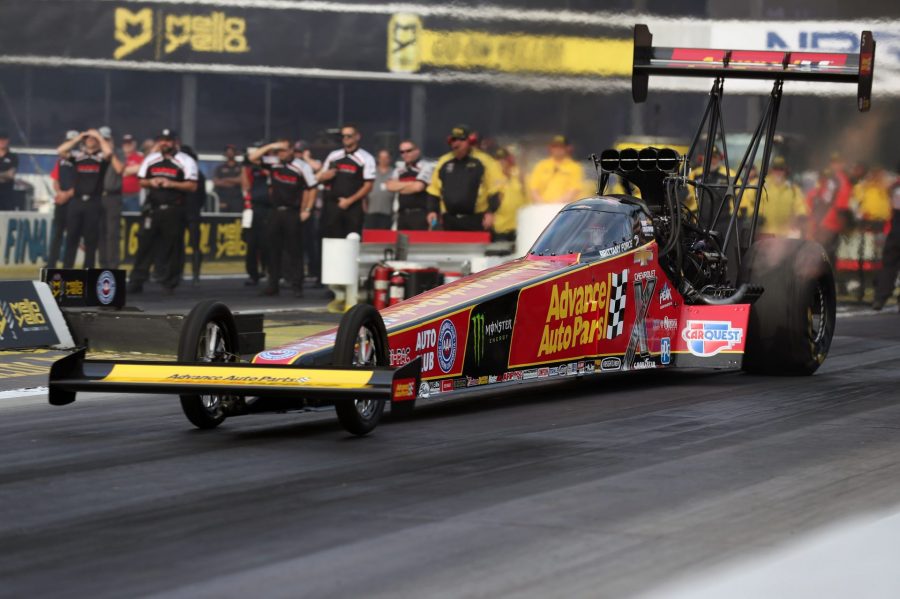 Brittany Force, who entered the weekend trailing just 16 points behind first in her bid for a second Top Fuel crown this weekend, launched her Advance Auto Parts dragster to a 3.726-second pass at 331.69 mph in the first qualifying round to be third quickest of the group and pick up two bonus points. Force came into the evening session on a solo run where, like the majority of the Top Fuel class, struggled to make it down track when the smoked the tires and had to shut off early running only a 6.640-second pass at 97.64 mph. The Advance Auto Parts team will start day two of qualifying from the No. 5 spot.

“First day of the last race of the season and we’re fifth, not a bad place to be. We picked up two bonus points in round one. We’re in the hunt for a championship so (crew chief) David Grubnic and this entire Advance Auto Parts team, we’re all pushing,” Force said. “You can’t run the car safe. You’ve got to push it to the limits and that’s what we did on that last run and we lost but we’ll pick it back up tomorrow.”

In what proved to be a difficult start to qualifying for a majority of the Funny Car class, points leader Robert Hight hazed the tires in his first pass down Auto Club Raceway at Pomona to run his Auto Club Chevy Camaro to a 4.879-second pass at 158.59 mph. In the evening session, Hight was on a good-looking pass but shook the tires to light the scoreboard with a 4.354-second pass at 306.05 mph. He’ll head into the final two qualifying sessions sitting 12th.

“We are going to basically forget about today, it didn’t go the way we wanted. Tomorrow it’s going to be hotter, more like the way it’s going to be on Sunday. Really, we need to get our act together tomorrow and be ready,” Hight said. “Two more runs and I still think we can get this Auto Club Chevy up to the top and put ourselves in a good position for the championship.”

In his quest for a 17th Funny Car championship, John Force also struggled in the first qualifying round like teammate Robert Hight when he too hazed the tires to make a 4.185-second pass at 292.65 mph. In the second session, the 151-event winner found himself in similar trouble when he went up in smoke and had to pedal his 11,000-horsepower machine to the finish line to make a 6.264-second pass at 108.01 mph.

“Like Robert said, some of the guys got down the race track and we didn’t. But we will tomorrow. Not getting discouraged just moving forward,” said Force who will start Saturday’s qualifying sessions in 10th. “These PEAK boys, (crew chiefs) Brian Corradi, Danny Hood, (car chief) Tim Fabrisi, will work just as hard as they have all season long and I’ll do my job and we’ll be just fine.”

Rookie of the Year candidate Austin Prock and the Montana Brand / Rocky Mountain Twist team had trouble during Friday’s qualifying when he lost traction and shut off early in both sessions. He first ran a 6.636-second pass at 91.89 mph, then a 6.995 at 90.07 to currently sit in the No. 16 spot.

“Not how we wanted to start it but we did have our quickest 60-foot on that last run. of my career on the last run in my career,” Prock said. “This place is just tricky it’s going to be completely different tomorrow. We’ll be just fine trying to run a mid-.70-second run first thing and then try to get after it Q4. If all goes to plan, we should be sitting pretty nice for Sunday morning.”

The conclusion of the 2019 NHRA Mello Yello Drag Racing Series will continue Saturday with nitro qualifying at 1 p.m. and 3:30 p.m. Eliminations are slated for 11:00 a.m. on Sunday. Television coverage will resume on Sunday with live finals coverage starting at 3 p.m. on FS1.