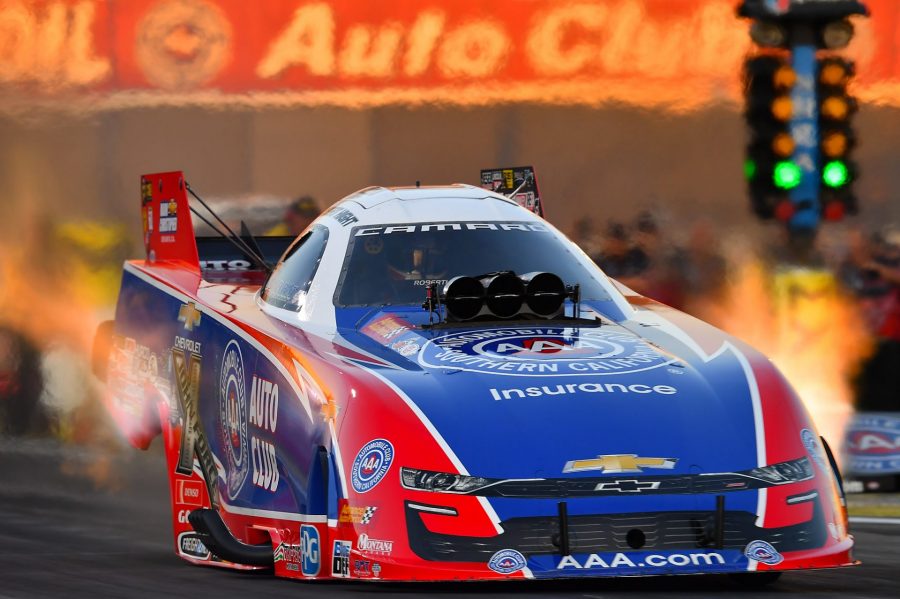 POMONA, Calif. (Nov. 16, 2019) — Robert Hight and the Automobile Club of Southern California Chevrolet Camaro SS team propelled themselves up seven spots to secure the No. 5 qualifying position Saturday at the Auto Club NHRA Finals at Auto Club Raceway at Pomona. In Top Fuel, Austin Prock improved to lock in the No. 10 spot with his Montana Brand / Rocky Mountain Twist team and Brittany Force’s consistent performance earned her the No. 8 spot with Advance Auto Parts. Funny Car teammate John Force and the PEAK Coolant and Motor Oil Chevrolet Camaro SS team will start race day from the No. 12 spot.

The John Force Racing team will be racing for a chance to secure two NHRA Mello Yello Drag Racing Series world titles when they line up for eliminations on Sunday at what is considered a hometown race for the team that has headquarters in Yorba Linda, Calif.

Leading the battle for the 2019 Funny Car championship, Hight struggled through Friday’s qualifying sessions and seemed to continue to struggle when his Chevy Camaro again smoked the tires to run a 4.199-second pass at 233.03 mph during Saturday’s opening qualifying run. Hight and the Auto Club Chevy Camaro SS team came up in the final qualifying round back in championship form. The Jimmy Prock and Chris Cunningham-led team laid down an impressive 3.895-second pass at 330.55 mph to be third quickest of the session, pick up two valuable bonus points and jump seven spots to earn the No. 5 qualifier heading into race day.

The 15-year racing veteran will match-up against teammate and John Force Racing team owner, John Force in round one Sunday as he continues his battle for a third Funny Car championship, a seventh win of the season, and a fifth victory at the facility, second at the Finals event.

“Not an optimal situation to be racing John first round. I feel John has had the best car since Seattle, so we’re racing one of the top cars out here and it’s just a bummer. One of our days and years is over first round and it’s not supposed to be that way,” said Hight who is 28-24 against Force and has won four of six meetings this season. “We’re going to have to push. That car is capable of running low ET of the weekend first round and we’re going to have to push. When you have to push on a race track like this, Pomona, the way it is, anything can happen. So, I probably won’t sleep very well tonight.”

Just 22 points back from the lead, Brittany Force, in her first pass Saturday, laid down a clean 3.760-second pass at 327.98 mph in her Advance Auto Parts dragster to be fourth quickest of the session and pick up one bonus point. The 2017 Top Fuel world champion followed up the run with a stout 3.761 at 320.97 in the final session. Force secured the No. 8 qualifier off her 3.760 in the third qualifying round.

She’ll go head-to-head with Don Schumacher Racing rival, Antron Brown in round one as she competes for her second Top Fuel championship crown, third win of the season and second at the facility.

“Just wrapped up qualifying at the last race of the season here in Pomona. We’re in a tough position, we’re No. 8, we race Antron Brown first round and we’ll probably see Steve Torrence in the second round,” Force said. “If I were to go into this thing with anyone, it would be David Grubnic, Mac Savage and this Advance Auto Part team. We’re going to have to throw down tomorrow, we’re going to have to put everything into this thing if we want to make it work and if we come out on top, it will be that much sweeter.”

Chasing an unprecedented 17th Funny Car world title from fourth in points, John Force and the PEAK Coolant and Motor Oil Chevy Camaro SS team struggled in the final two qualifying sessions on Saturday. In his first run, Force smoked the tires making a 4.039-second pass at 319.22 mph, then, in his final pass, lost traction to cross the finish line at 4.270-seconds and 212.53 mph to end the day in the No. 12 qualifying spot.

In his quest for a 152nd NHRA career victory, Force will first need to get past teammate and protégé, Robert Hight in a round-one match-up.

“I’ve got a car that’s still in the hunt in this deal. My car, ‘Old Blue,’ was trying to run a number right there and it moved around on me, got on a bump and let go,” said Force who has the most Funny Car wins at Auto Club Raceway at Pomona with 16. “You know I’m 70 years old, I drive for PEAK, Chevrolet and I got a shot for the title and that’s where I’m going. I don’t race Robert differently than anybody else. I can win this championship and so could he, he’s got better odds than me but I’m still in it.”

Beginning day two of qualifying in the No. 16 spot, Austin Prock improved in the third qualifying session powering his Mike Green and Ronnie Thompson-tuned dragster to 3.776-seconds at 327.98 mph. The third-generation racer, who is competing for his second win of the season, continued to keep his performance consistent in the final qualifying round crossing the finish line with a 3.733-second pass at 328.22 mph to start race day from the No. 10 qualifying position.

Prock will face fellow rookie Jordan Vandergriff in the first round of eliminations at Auto Club Raceway at Pomona.

“Good way to end qualifying. Made two pretty solid passes today. Not the quickest car but going up and down the race track and we can build off that tomorrow and go up there and run low ET,” Prock said. “We were hoping for a little bit more in Q4. It was down on power a little bit but we’re sorting that out. We’ll have to be ready for tomorrow morning. It’s rookie vs. rookie tomorrow so hopefully we can take that win and take home the Auto Club Road to the Future Award at the end of the day.”