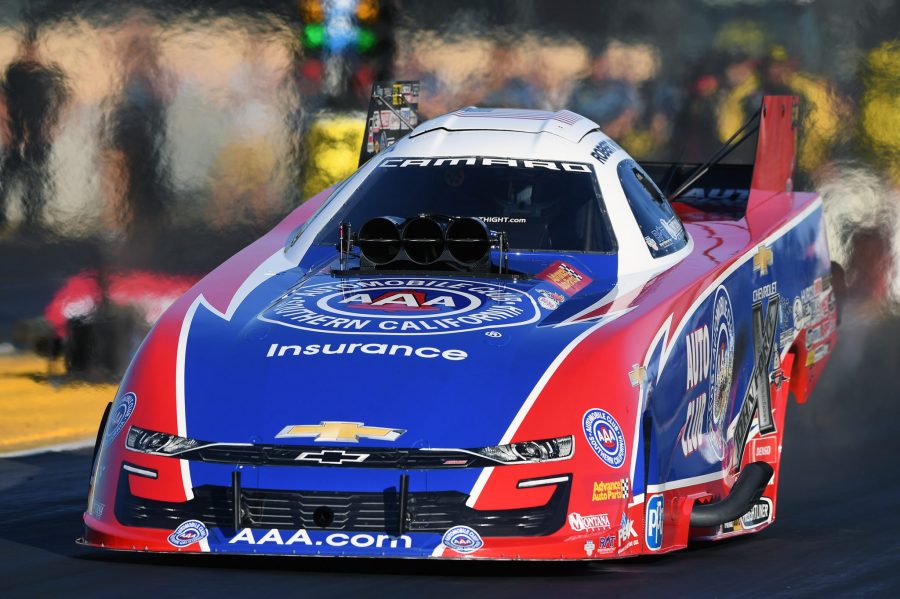 “It’s a milestone. I mean, if you look at the guys that have raced Funny Car there are a lot of big names, Kenny Bernstein, Don Prudhomme, the guys that when I was a kid, I watched on T.V. and they don’t have 50 wins in a Funny Car. That’s amazing. It’s hard to believe.”

Hight and his Jimmy Prock and Chris Cunningham crew have been flexing their muscles in the Funny Car class since the season began. They instantly kicked off the season as the team to beat when they raced to victory at the season-opening Winternationals and have had a stranglehold on the NHRA Mello Yello Funny Car points standings ever since. To maintain their positioning, the team has tallied five event wins and eight No. 1 qualifiers, just five green hats away from the Funny Car record held by team owner John Force.

Through a car change that came between the grueling June four-in-a-row and the stand-alone race in Epping, N.H. and testing out parts and new combinations, Hight has maintained his confidence in crew chiefs Prock and Cunningham.

“We started running a new car and went into Denver and we did test some stuff at the beginning of the Western Swing and it didn’t go as well as we wanted so we went back to basics and it earned us the No. 1 qualifier and a semi-final finish in Denver.” Hight said. “We came here and I know there’s a lot of critics that say well, Jimmy Prock and this team can only run when its great conditions and you can throw down and run big numbers, but I think Sunday in Sonoma we proved that on an 130 degree track, for three rounds, that we could slug it out with anybody.”

With that mentality, Hight enters the final race of the Western Swing at Pacific Raceways with a quality qualifying track record, having started race day at the bottom half only three times at the facility in his 1-year career. With five No. 1 qualifiers, two final round appearances that included a win in 2017 and without a doubt the Funny Car to beat, Hight isn’t concerned about a good showing at the 2019 Northwest Nationals.

“I went to the finals here in my rookie season, we always seem to do well in qualifying and I think I’ve only had a handful of early Sunday exits,” Hight said. “Right now, with this Auto Club Chevy and the way this team is working hard, we are right where we want to be. The Countdown isn’t far away so now isn’t the time to let up, it’s the time to really get ourselves together to make a run for another championship. I’m excited to see how we close out this Western Swing.”