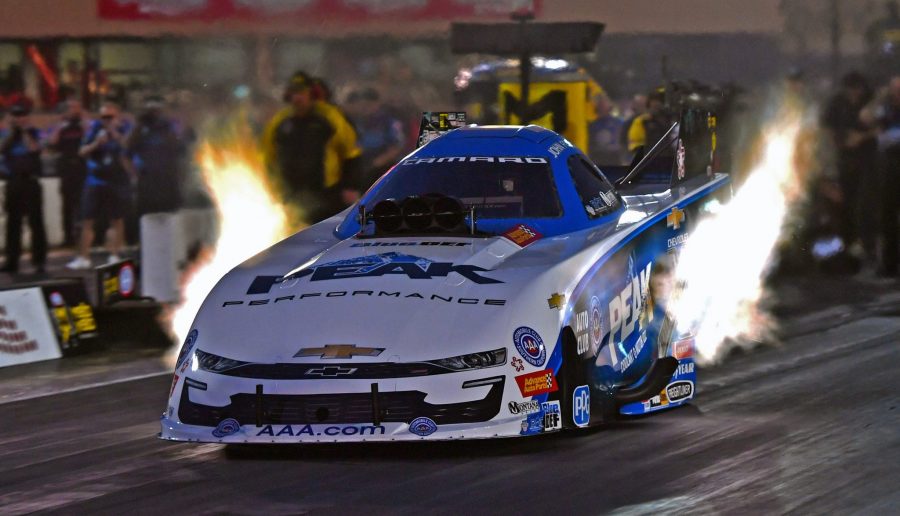 After posting the quickest time during eliminations at the Sonoma Nationals, Force was left to ponder what might have been after a mechanical failure locked his PEAK Camaro in reverse as he prepared for a semifinal match with Matt Hagan. Unable to rectify the issue and compelled to abort the run, the 16-time champion could do nothing but watch while his rival made a solo into the final.

“I just couldn’t get the thing out of reverse,” Force said. “I tried everything. I neutralized the clutch, shoved it in, let it out. I was almost ready to whack (the throttle) to see if I could get it in gear. I bent the handle off, basically, and it still wasn’t going to go. Things happen, but my guys gave me a great race car. All you can do (after something like that) is regroup and get back in the game.”

Force has kept himself solidly “in the game” since the beginning of the current campaign. Although he is winless thus far, he rolls into the great Northwest in third place in Funny Car points behind only teammate and protégé Robert Hight, driver of the Auto Club of Southern California Camaro, and Tommy Johnson Jr.

He has started three races from No. 1, gone to the semifinals or beyond in nine of 15 starts and been quickest on race day at four different events. Those numbers have thrust him prominently back into the championship conversation and put him solidly in position to secure his record 35th consecutive Top 10 finish.

Furthermore, last week’s disappointment, painful as it was, actually is a source of some encouragement for the eight-time Seattle winner.

The last time he was unable to make a run during eliminations was in the first round of the 2010 Keystone Nationals at Reading, Pa., when his car broke on the burnout against Dale Creasy Jr. That misstep cost him the points lead and, with only two races remaining, many thought it would deny him the championship as well. Instead, he rallied to win the next two races (at Las Vegas and Pomona, Calif.) and, with them, the championship.

“I have a great race car and a great team,” Force said. “150 is going to happen. I just have to keep doing my job and going rounds.”

Force owes much of his renewed confidence to the arrival of crew chiefs Brian Corradi and Dan Hood, who moved over to the PEAK Camaro this year after Courtney Force opted to step out of her own car. Force now is driving the Chevy in which his youngest daughter won four races last season, was runner-up at Seattle and won the regular season championship. It has been a fast car all season long. The biggest issue, one that is ongoing, has been adjusting for the 70-pound weight difference between father and daughter.

However, it also is the track where he watched daughter Ashley Force Hood crash in 2007 and on which, one year later, he was the odd man out – the only Funny Car driver on the grounds who didn’t make the starting lineup.