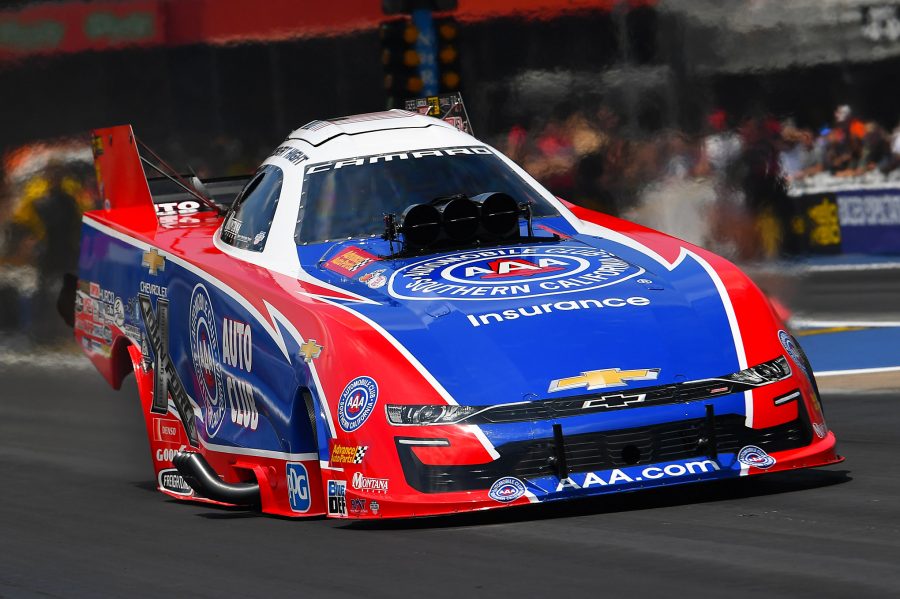 NORWALK, Ohio (June 20, 2019) — Points leader Robert Hight and the Automobile Club of Southern California Chevy Camaro SS team are going to the Summit Racing Equipment NHRA Nationals, the 12th event on the NHRA Mello Yello Drag Racing Series Season 24 race schedule, hungry to build on their success through the first half of the season.

With eyes set on a third Championship, Hight has powered his Auto Club Chevy Camaro to four wins, two runner-up finishes and six No. 1 qualifiers in the first 11 events of the 2019 season. He’s also tallied a handful of history making milestones including at the 50th anniversary Gatornationals where, on his way to the event win, he became the first driver to collect three consecutive No. 1 qualifiers in the first three races of the season since Kenny Bernstein in 1987. At the Southern Nationals, Hight became the first driver since 1987 to be No. 1 in five of the first seven events. Most recently, Hight grabbed his fourth Wally of the season and 49th of his career at the Heartland Nationals tying him with Don “Snake” Prudhomme for 13th on the all-time list.

“I’m really proud of this Auto Club team. We didn’t make it to the winner’s circle in Bristol but Jimmy Prock and Chris Cunningham, they’re working hard to set us up for the rest of the season. We’ll keep going rounds and get the job done.” said Hight. “We’ve had a really great season. We’re sitting in the points lead, have been all season, and I’m not worried. These guys know this car and we’ll get where we want to be.”

The two-time Funny Car world champion heads to Summit Racing Motorsports Park with a history of success on his side. High has finished runner-up in 2008 and 2017, and has qualified inside the top five 10 times with three No. 1 qualifiers in 2007, 2008 and 2011. At last year’s event, he qualified No. 5 but fell short to team owner, John Force in the second-round.

“We’re heading to Norwalk, it’s the last of the four in-a-row and I’m ready to get there. The best thing about these back-to-back races is not having too much time out of the driver’s seat, so I’m feeling good and hoping to go rounds on race day,” said Hight. “We’ve never won this race but we’ve finished runner-up before and we’ve qualified well, so I’m excited.”