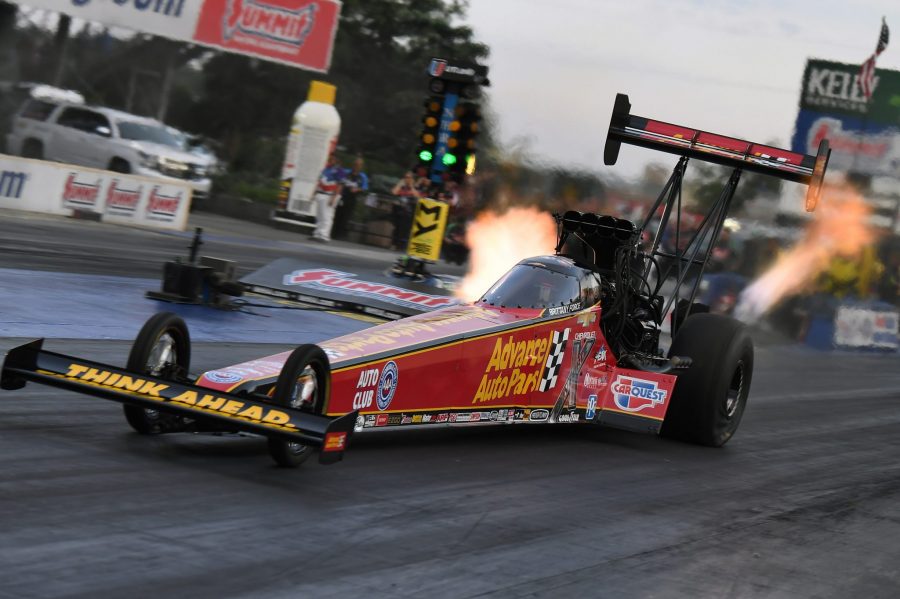 NORWALK, Ohio (June 21, 2019) — Brittany Force powered her Advance Auto Parts Top Fuel dragster to the top of the field Friday night at the Summit Racing Equipment NHRA Nationals at Summit Racing Motorsports Park. Her legendary father, John Force is No. 2 with the PEAK Coolant and Motor Oil / BlueDEF team, Robert Hight is No. 9 with Automobile Club of Southern California, and rookie Austin Prock and the Montana Brand / Rocky Mountain Twist dragster team are No. 11.

Coming into the weekend sitting fifth in the NHRA Mello Yello points standings, Brittany Force started Friday’s qualifying with a 5.965-second pass at 111.01 mph after losing traction and shutting off her Advance Auto Parts dragster to sit in the No. 12 spot. Force’s performance improved in the night session when she laid down a stout 3.712-second pass at 328.38 mph to take the No. 1 spot and pick up three bonus points.

“You know, I’m feeling confident going into this weekend. The Advance Auto Parts team stayed after in Bristol and tested all day Monday, and we were hoping to find some things and figure it out before coming to this last race of the four in-a-row, and I think we did that. That first run we didn’t get down there, but that second run was a beautiful run. Putting a .71 on the board, it was awesome and stealing that No. 1 spot,” said Force. “I’m looking forward to tomorrow. We‘re hoping for two more consistent runs, that’s what we really need going into race day and our plan is to go out and win this thing. We’ve definitely had our ups and downs, so it feels really good to celebrate this small victory and we’re hoping to fight all weekend long.”

John Force and the PEAK Coolant and Motor Oil / BlueDEF Chevy Camaro SS team had problems at half-track and shut off early in the first qualifying session to run a 4.230-second pass at 228.15 mph. The 16-time Funny Car world champion came into the second session sitting in tenth before running a stellar 3.884-seconds at 329.02 mph under the lights to end Friday’s qualifying in the No. 2 spot.

“Our car went, it was really hunting down there in that second pass. Tomorrow’s a new day but I’m excited for this PEAK team. Brian Corradi and Danny Hood, they really know this car and I’m just learning,” said Force who picked up two bonus points in the night session. “Brittany is No. 1 right now with the Advance Auto Parts dragster, and Robert and Auto Club, and the Prock kid with Montana Brand / Rocky Mountain Twist are qualified, so I’m hoping tomorrow we can all do better and stay in it. This is a great race track, the Bader family, they really know how to put on a show. The weather created some issues, but I’ll tell you, it was beautiful today and that should tell you how the rest of the weekend is going to go. And did you catch the fireworks? I’m telling you, they do it all for the fans.”

After smoking the tires, Robert Hight and the Automobile Club of Southern California Chevy Camaro team closed out session one with a 4.346-second pass at 205.54 mph. In his second pass, Hight put down a 3.938-second pass at 297.81 mph improving his positioning from No. 11 to No. 9.

“We had problems in the first session and didn’t put up the numbers we were hoping for but we came back in the second and did better,” said Hight. “I’m confident in this Auto Club team, and Jimmy Prock and Chris Cunningham will get this thing going tomorrow and I think we can make some consistent passes and move up into the top half.”

Austin Prock and the Montana Brand / Rocky Mountain Twist dragster smoked the tires in their first pass of the day making a 5.732-second pass at 122.06 mph to sit in the No. 10 spot. Prock, like most of the Top Fuel class, improved in the second session and made a 3.776-second pass at 324.90 mph to start Saturday’s qualifying from the No. 11 spot.

“We struggled in Q1, we’ve been fighting with some problems in the clutch department, just trying to get the wear under control and to be consistent. For Q2 we changed quite a few things and it went down the track. It wasn’t the fastest run but it was a nice, clean run. The parts looked nice and all the clutch management functioned properly, so it was a good rebound but we still have to be better,” said Prock. “I know Mike Green and Ronnie Thompson; they’re heading in that direction and they’re determined. They’re not very happy with our performance lately and they definitely want to be at the top of the chart so I’m just going to keep on holding on and try and do my job, and the car will come around. This Montana Brand / Rocky Mountain Twist team is smart and they’re going to keep fighting until we’re there.”