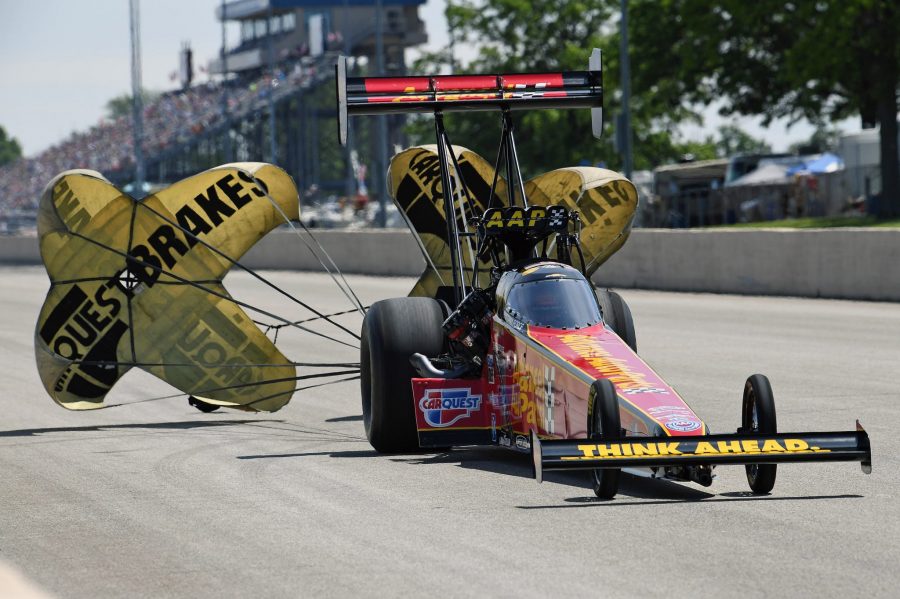 NORWALK, Ohio (June 22, 2019) — Brittany Force and the Advance Auto Parts Top Fuel team held onto the No. 1 qualifier Saturday at the Summit Racing Equipment NHRA Nationals at Summit Racing Motorsports Park. John Force kept the No. 2 spot with his PEAK Coolant and Motor Oil / BlueDEF team, two-time Funny Car champion Robert Hight and the Auto Club Camaro will start from the No. 10 spot, and Austin Prock and Montana Brand / Rocky Mountain Twist are No. 11.

Brittany Force landed her Advance Auto Parts dragster in the top spot for the fourth time of the 2019 NHRA season off the efforts of a stout 3.712-second pass at 328.88 mph on Friday night. It also marked her 14th career No. 1 and first at Summit Motorsports Park.

The 2017 Top Fuel world champion started day two of qualifying with a clean 3.791-second pass at 326.63 mph in the middle of the day giving the Advance Auto Parts team necessary data heading into Sunday race day. In the final session, Force smoked the tires and had to shut off her David Grubnic and Mac Savage tuned dragster to run 6.354-seconds at 103.45 mph but would end the day with a stronghold on the Top Fuel class. Force will face Lex Joon in the first round.

“I have really high expectations going into tomorrow. We’ve been struggling and sometimes you go through these downwards slopes and you have to come back up. Staying in Bristol and testing changed a ton of things coming into this weekend and to come out here and go No. 1, its huge for this Advance Auto Parts team,” said Force. “David Grubnic, Mac Savage, all my guys, we’re all really excited. We’re hoping that my run from Friday will be comparable to how tomorrow looks but I put all my faith in this team and I think we’re looking good for tomorrow.”

Racing veteran, John Force laid down an impressive 3.935-second pass at 327.35 mph in his PEAK Coolant and Motor Oil / BlueDEF Chevy Camaro to make the quickest pass of the third session and pick up three bonus points. He kept the consistency going into the final qualifying session when he made a 3.915-second pass at 325.30 mph. It was the third quickest of the pack earning him an additional bonus point. The 16-time Funny Car world champion will start race day from the No. 2 spot, a position in which he’s won from 22 times.

“In No. 2, it’s a good place to be. I have a good hot rod and I’m excited about it. I’m learning how to drive all over again and this PEAK team is helping me get there. I’m racing Cruz (Pedregon) my old buddy from way back in the first round, we’ll give the fans a show,” said Force who has raced Pedregon more than any other driver and has a 71-24 winning record against. “My car is competitive, I’m excited to see it make every run and to see this team pull together. We’re ready to go out there tomorrow and go some rounds for our sponsors. I spent time in our campsite today and everyone appears to be happy. I’m making new friends and that’s what it’s all about, those fans out there. I’m ready to put on a good show for them tomorrow. There’s a lot of work to do to get 150 but it all starts in the morning.”

Robert Hight and the Automobile Club of Southern California Chevy Camaro team will start race day at Summit Racing Motorsports Park from the No. 10 position off their 3.938-second pass at 297.81 mph from Friday night. In Saturday’s first session, Hight dropped cylinders down track to run 4.131-seconds at 244.63 mph. After making big changes in between rounds, he improved in the final qualifying session to make a 3.943-second pass at 327.35 mph but would stay in the No. 10 position. Hight will take on J.R. Todd in round one on Sunday.

“That last run wasn’t quite as good as we planned. We were hoping to move up but at least it went,” said Hight. “I’m proud of my team, we switched cars between qualifying runs. There’s not a lot of teams that can say they can do that. These guys have everything prepared well and it’s ready to go. We see some things we can tweak and we have a tough first round. We’re going to go out there and do our best to get him.

“This car drives better, that’s why we switched. The other one wasn’t handling, we were going to have it front halved anyway after this race, it was messed up,” said Hight about the decision to retire the car that earned five wins and six No. 1 qualifiers in 114 runs that began at the 2018 AAA Texas NHRA FallNationals in Dallas, an event he won after breaking his collarbone while winning in St. Louis just one week prior. “We just hope this one has as much magic as the last one.”

Rookie of the Year candidate, Austin Prock made a clean pass in Saturday’s first qualifying session running his Montana Brand / Rocky Mountain Twist dragster to 3.840-seconds at 321.81 mph. In his final run, Prock improved to make a 3.771-second pass at 326.63 mph and held onto the No. 11 spot. The first-year driver will face Terry McMillen in round one.

“It was a good rebound day for this Montana Brand / Rocky Mountain Twist team. We ran decent in the first round and second round we ended up being fourth quickest. We were definitely looking for a little bit more but it ended up working out; we’re 11th and now we don’t have to race Steve Torrence in the first round,” said Prock. “That was a good move on our end and hopefully we can put four of those together for tomorrow.”

Eliminations at the Summit Racing Equipment NHRA Nationals at Summit Racing Motorsports Park are set to begin Sunday at 11:00 a.m. Catch the action on FOX Sports 1 (FS1) at 6:30 p.m. ET.