BRITTANY FORCE AND ADVANCE AUTO PARTS MOVE TO NO. 3 IN THE NHRA MELLO YELLO POINTS STANDINGS 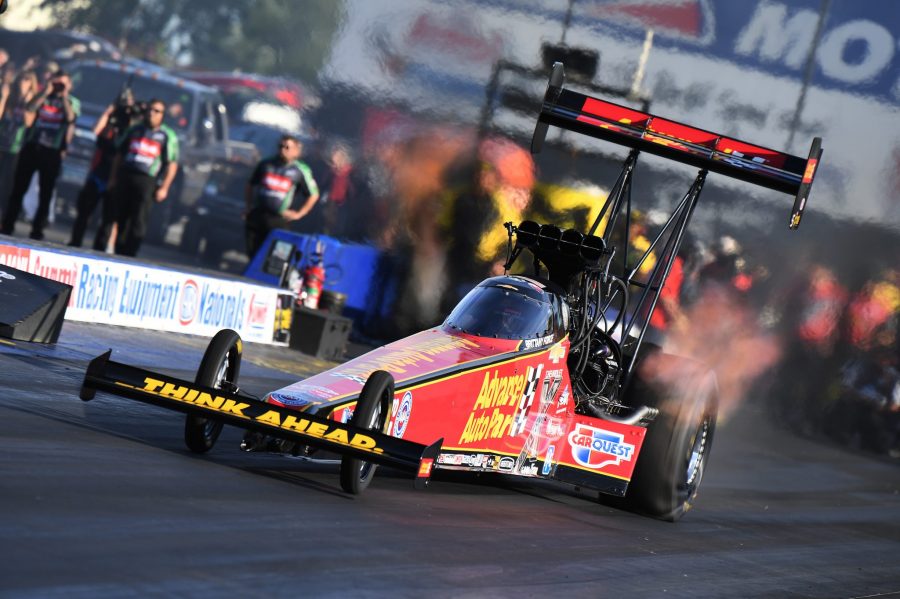 Starting race day from the No. 1 qualifier spot for the fourth time this season, Brittany Force and the Advance Auto Parts team laid down a 3.735-second pass at 332.59 mph on a solo run in the first session after Lex Joon’s chutes deployed before the start. Force was paired against Billy Torrence in the quarterfinals where both drivers smoked the tires and had to pedal their way to the finish. Force was able to turn on the win light when she ran 4.431-seconds and 248.61 mph bettering Torrence’s 6.220 at 162.49.

Heading into the semi-finals for the fourth time this season, Force was on what looked like a clean run until her Advance Auto Parts dragster over powered the track near the finish line and went up in tire smoke. The 4.114-second pass at 272.89 mph from the Advance Auto Parts dragster wasn’t enough for reigning Top Fuel world champion Steve Torrence’s 3.820 at 326.71.

“Overall, it was an awesome weekend for this Advance Auto Parts team in Norwalk. I thought that we were going to get past that semi-final round and take it to the final. We stayed after Bristol to do some testing and really turn this car around but the team is pumped up, we’re feeling good, we moved up in points and we made it to the semis,” said Force. “I’m very happy and we all get a weekend off before going into Epping (New Hampshire) and we did what we wanted. We ended on a pretty good high note.”

John Force opened round one of eliminations with the low elapsed time of the Funny Car class when he raced his PEAK Coolant and Motor Oil / BlueDEF Chevy Camaro SS to a 3.937-second pass at 328.30 mph defeating longtime rival Cruz Pedregon’s 4.832 at 168.96. The PEAK / BlueDEF team kept the consistency in the second-round where Force ran 3.994-seconds at 320.13 mph to send reigning Funny Car world champion J.R. Todd home with his 4.022 at 318.17.

“It wasn’t a bad weekend for the PEAK team, we made it to the semis but I’m learning and we’re still working out the bugs. There’s not much I can say except that it’s coming, sooner or later,” said Force, who is sitting second in points. “Brittany made it to the semis with Advance Auto Parts, so I’m proud of her for that. Robert and Auto Club, and Austin with Montana Brand / Rocky Mountain Twist were out early but I know they’ll get things figured out. I’m proud of all our teams and we’ll all be ready for the next one.”

After switching cars before Saturday’s final qualifying session, Robert Hight and the Auto Club Chevy Camaro team had an early first-round exit on Sunday at Summit Motorsports Park. Hight, who had the lead at the start, dropped cylinders down track to run a 4.048-second pass at 287.41 mph that wasn’t enough for J.R. Todd’s 3.978 at 318.99. The two-time Funny Car world champion will head to the next event still leading the Funny Car points standings.

“We switched cars yesterday and like with everything this Auto Club team does, we’ll get it figured out and get this thing back in the winner’s circle. I’m not really worried and having Jimmy Prock and Chris Cunningham leading things, I’m confident,” said Hight. “We have a week off before heading to Epping and it gives us all time to regroup and we’ll be ready to get after it. It will be good.”

In the first round of eliminations, Austin Prock handled his Montana Brand / Rocky Mountain Twist dragster to an impressive 3.750-second pass at 329.67 mph but fell short to Terry McMillen’s 3.718 at 329.58. Despite the loss, it was Prock’s best pass of the weekend. The Rookie of the Year candidate will leave Summit Motorsports Park still in the top 10 points standings.

“It was a tough break this morning. We were fourth best of the session and had a really good light. If we combined those together, we would have beat anyone in the session but Terry. We ran good, that’s one good note on the day. It sucks to go out first round again but the car is really coming around. I know it doesn’t show on Sunday but if you look at incrementals and its consistency, it’s the best it’s ever been,” Austin said. “We’re going to stay tomorrow and test. It’s going to be overcast and cool so the track should be really good. We’re going to try and figure out how to run a high sixty and seventy flat because we’ve been running mid-seventies so we’ll be able to split the difference and go up any race track and be confident in what we’re doing. I’m looking forward to it and we’re going to get ourselves a win here soon.”