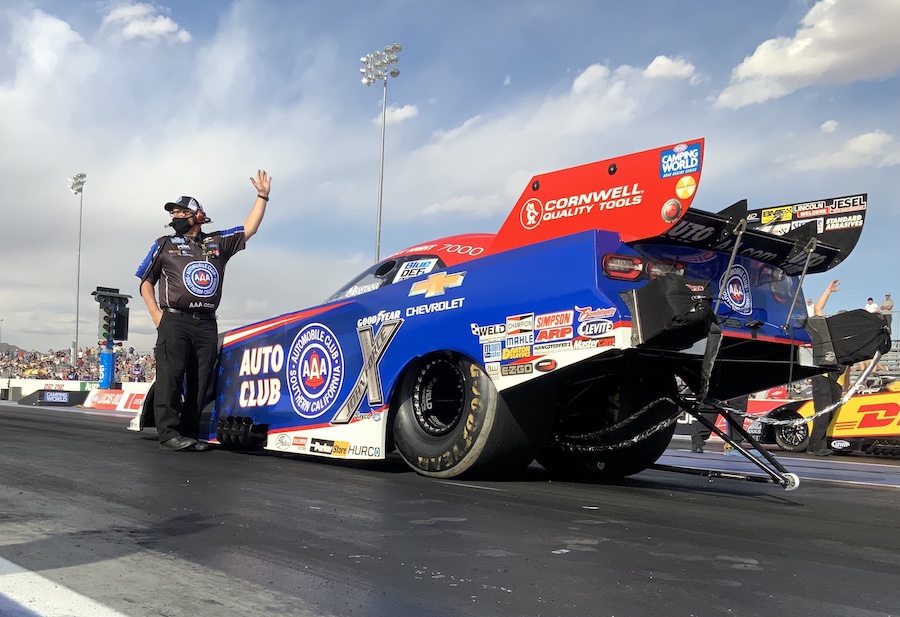 LAS VEGAS (April 16, 2021) – Robert Hight and the Automobile Club of Southern California Chevrolet Camaro SS Funny Car team arrived at the DENSO Spark Plugs NHRA Four-Wide Nationals at The Strip at Las Vegas Motor Speedway and picked up right where they left off powering to the No. 1 qualifier spot. John Force and the PEAK / BlueDEF PLATINUM team had a strong performance landing in the No. 3 spot and Brittany Force and her Flav-R-Pac Top Fuel dragster team will head into day two of qualifying in the No. 11 position.

After a month off since the NHRA Camping World Series season opening Gatornationals, Hight and his Auto Club team wasted no time asserting dominance over the Funny Car class. The three-time world championship team laid down an impressive 3.922-second pass at 327.59 mph in the final quad of Funny Car qualifying landing them solidly at the top of the pack.

“I’m glad to be back in the race car. Glad that we’ll be racing a little bit more of a normal schedule because that month off was just too long, especially after a runner-up finish. I’ve thought about that final round a lot in the past month,” said Hight, who earned three bonus points. “I’m happy to be back with my team and be able to redeem ourselves. We’re doing just that. That was a good run and we’ll look for more tomorrow.”

John Force and his PEAK / BlueDEF PLATINUM Chevy Camaro didn’t miss a beat. The 16-time champion raced his way to a clean 3.954-second pass at 324.75 mph that earned the PEAK / BlueDEF team an extra bonus point for being third quickest of the session.

“I love my job. Driving this PEAK / BlueDEF Chevy. We’re back racing, this is great. Bruton Smith making this happen and it’s four-wide. I tried not to think about it too much but then I got up there to the starting line and I really had to focus. You have to get your mind set right,” Force said. “I’m excited to be out here, I’ve got all my sponsors out here. Frank Tiegs who owns Flav-R-Pac will be out here with me tomorrow. It’s exciting to have all these Funny Cars, 19 Funny Cars are racing. There are people her from my past that I raced with. This is totally awesome.”

In her Flav-R-Pac livery, Brittany Force and her Top Fuel team overpowered the track in their first go at The Strip ending the evening with a 5.067 pass at 133.74 mph, temporarily landing them in the No. 11 spot.

“We won four-wide in 2016 in Charlotte so I’m comfortable with the set up. It’s not my favorite. Looking at a tree with four bulbs all the way across, it’s something different. You have to find your focus and know what lane you’re in,” Force said. “Q1 we struggled, we overpowered the track and it went up on smoke right before half-track. Going into tomorrow we get two runs before race day. Currently No. 11 but we will step it up.”