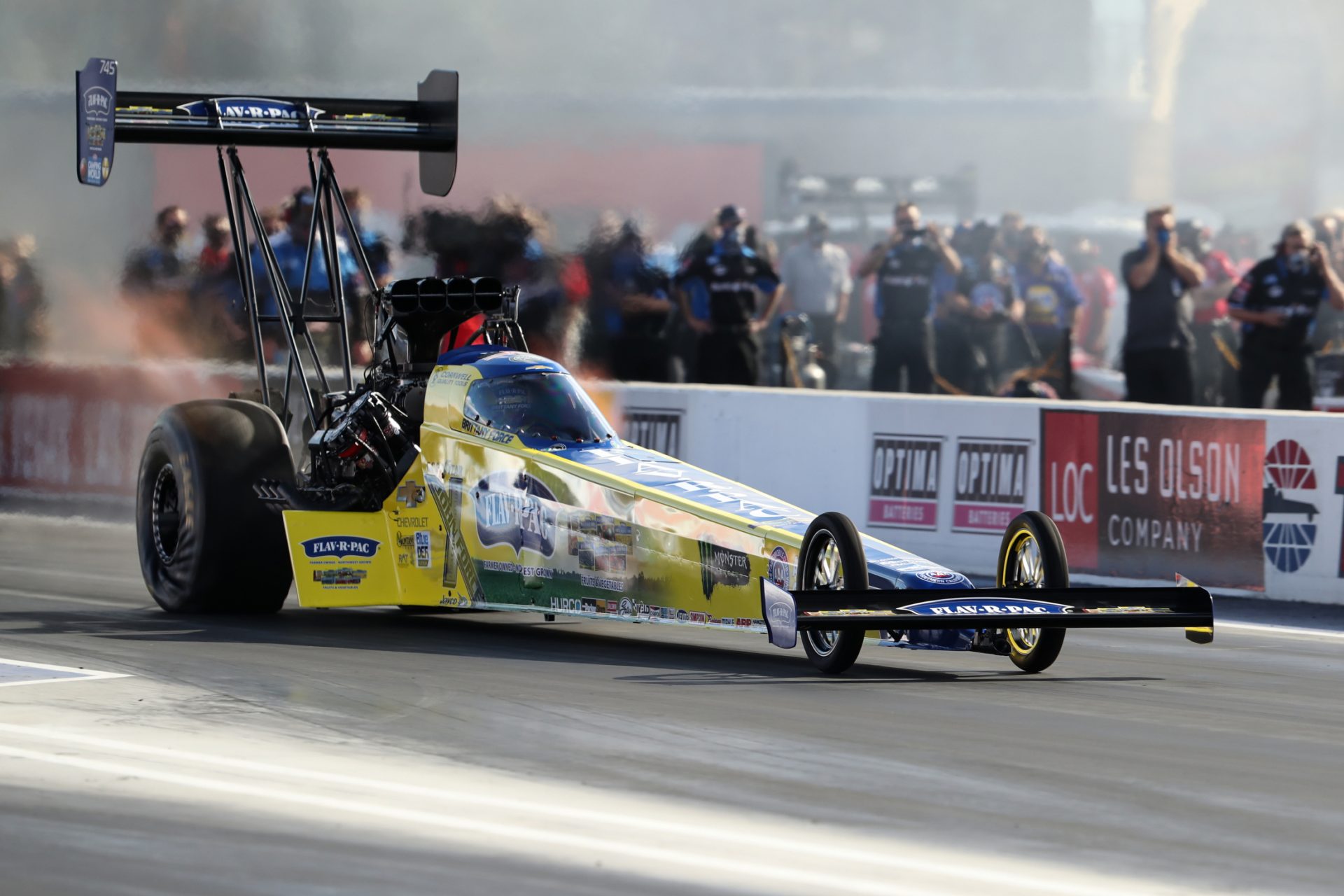 LAS VEGAS (April 17, 2021) – There was nothing but improvement for the John Force Racing teams on day two of the DENSO Spark Plugs NHRA Four-Wide Nationals at The Strip at Las Vegas Motor Speedway. Brittany Force and her Flav-R-Pac Top Fuel dragster and Robert Hight and his Automobile Club of Southern California Chevrolet Camaro SS Funny Car took the top spots in their respective categories and John Force with his PEAK / BlueDEF PLATINUM Camaro landed in the No. 2 position.

After overpowering the track on the lone run of Friday, Brittany Force and the Flav-R-Pac Top Fuel dragster team saw the most improvement for John Force Racing. Their 3.766-second pass at 325.53 mph moved them nine spots into No. 2, just behind reigning and three-time world champ Steve Torrence.

To cap off qualifying, Force and her David Grubnic and Mac Savage led Flav-R-Pac team blasted to a 3.732-second pass at 320.66 mph to steal the No. 1 qualifying position, the 21st of her career, second at The Strip at Las Vegas Motor Speedway and first at the spring event.

“We made big jumps on our runs today. First No. 1 qualifier of the season for this Flav-R-Pac / Monster Energy team. We are pumped to be here in Vegas. [Crew chiefs] David Grubnic and Mac Savage said they were going to hall ass on that run, said they were going to step it up. And we did just that,” said Force who collected six bonus qualifying points. “Obviously tomorrow we are focused now on winning. We put today behind us, move into tomorrow and go after a win. That’s our primary focus.

“I have lots of confidence in this team,” continued Force. “Returning with the entire Flav-R-Pac / Monster Energy team that we had from 2019 and beginning of 2020, I think, speaks a lot for itself. It shows how much loyalty this team has for John Force Racing and they stood by us and we returned together and we’re stronger than ever.”

Force will begin eliminations facing off against Antron Brown and Justin Ashely. With only 15 Top Fuel cars entered into the event their quad has one bye.

Coming into the day already in the No. 1 position, Hight and the Auto Club team bettered their Friday night performance with a 3.918-second pass at 325.77 mph during the final quad of the second session.

In their last run of qualifying, Hight completed his sweep with another stand-out run of 3.882-seconds and 331.85 mph to ensure his 69th career No. 1 qualifier, seventh at The Strip at Las Vegas Motor Speedway, fifth at the spring event and first in the four-wide format. The team’s speed was also quickest of the event and only one of two teams who reached the 330-mph mark, the other was team owner John Force.

“[Crew chief] Jimmy Prock basically called every single run we’ve made here this weekend at the Las Vegas Four Wide Nationals. He and [crew chief] Chris Cunningham really have this Auto Club Chevy working great. You know, in the last year we took off I don’t think there was a day that these guys didn’t look at the computer and think about what they could do to make this car better and the results are right here,” said Hight who earned nine bonus qualifying points. “We have to go three rounds tomorrow and I think we are in a good position to do that.”

Hight will race against Cruz Pedregon, J.R. Todd, and Jonnie Lindberg in his first quad of eliminations on Sunday. He will be chasing his first four-wide win at The Strip but his fourth at the spring event and sixth overall at the facility.

Already with a strong performance on Friday evening, John Force and the PEAK / BlueDEF PLATINUM team jumped one spot from No. 3 to No. 2 with their Q2 run of 3.936-seconds at 325.22 mph. Wrapping up their qualifying efforts, the 16-time champion’s Chevrolet Camaro stayed consistent with their improvement powering to a 3.898-second pass at 330.72 mph to secure the No. 2 qualifying spot.

“Well I thought I could get low in this PEAK / BlueDEF PLATINUM Chevy, it rattled a little bit but got through it and ran .89-seconds. Of course, Robert went .88, expected. I was excited to see Brittany go low with Flav-R-Pac. It’s good for us, makes us feel strong for being gone for a year. But tomorrow is an all-new ball game, and it’s four wide,” Force said. “PEAK / BlueDEF, Auto Club, Flav-R-Pac, Monster, Chevy, all of our sponsors, I want to thank you for sticking by us through the hard times. We’re back to doing some drag racing and we’re going to get back to winning.”

Eliminations at the DENSO Spark Plugs NHRA Four-Wide Nationals at The Strip at Las Vegas Motor Speedway will kick off at noon PT on Sunday. Fans can catch the action on FOX Sports 1 (FS1) at 5 p.m. PT / 8 p.m. ET.