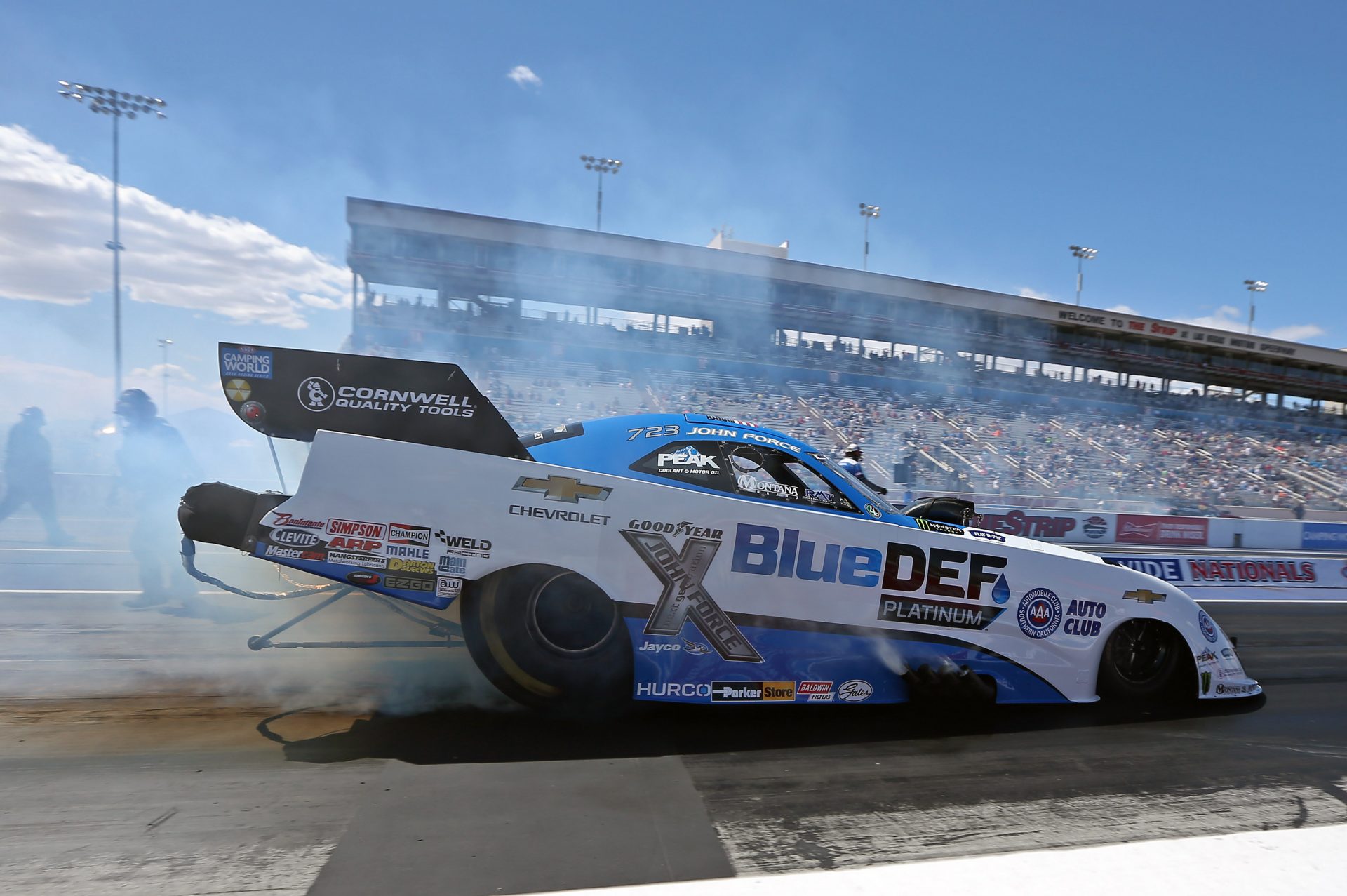 LAS VEGAS (April 18, 2021) – Coming into race day off of a strong qualifying performance at the DENSO Spark Plugs NHRA Four-Wide Nationals, all three John Force Racing hot rods narrowly missed a chance at the finals at The Strip at Las Vegas Motor Speedway making second round exits on Sunday.

“It was a tough day for the Auto Club team. We looked really good all through qualifying and then had a problem in that first round but I’m proud of this team,” said Hight who is now third in points. “All the guys worked really hard to get this car ready for the second round. Jimmy Prock and Chris Cunningham had this thing dialed in so I’m not worried and I’m looking forward to seeing what we can do. We’ll go out and do some testing tomorrow and move on to the next one.”

Top Fuel No. 1 qualifier Brittany Force and the Flav-R-Pac Top Fuel dragster team carried over their consistent improvement into race day winning their first-round quad with a stellar 3.722-second pass at a 330.80 mph that was quickest and fastest of the event. Force moved on with Antron Brown who had a 3.827 pass at 313.15 mph. The pair sent Justin Ashley home with a 3.899 at 268.22.

In the second round, Force faced Billy Torrence, Antron Brown and Clay Millican. Billy Torrence left early causing some confusion on the starting line. Both Force and Millican left late. The Flav-R-Pac dragster ran 3.815-seconds at 315.27 mph after dropping a cylinder. Millican went 3.816 at 320.13 but got the win on a holeshot with his .139-second reaction time compared to Force’s .273. Brown won the quad with a 3.761 at 316.23.

“Overall, a good weekend for this Flav-R-Pac team. We qualified No. 1 and picked up points there. We ran consistent all weekend and unfortunately second round we got taken out,” said Force who is now tenth in points. “That’s four-wide racing for you. You have to keep your focus and I lost it for a short second and that was enough to end our day. We’re going home but we go to Atlanta next.”

“We did our job, we qualified good. We went some rounds, Robert with Auto Club, myself with PEAK and BlueDEF PLATINUM and Brittany with Flav-R-Pac and Monster Energy,” Force said. “We didn’t get the win, almost got to the final but we had some breakage and that’s why you need sponsors. All my partners are really standing by me, Chevy, Cornwell Tools stepping up their sponsorship, Baldwin Filters and ParkerStore, you know and that what’s really important.”

After testing Monday at The Strip at Las Vegas Motor Speedway, the John Force Racing trio will continue competition in the NHRA Camping World Series with the NHRA Southern Nationals at Atlanta Dragway April 30-May 2. It will be the final time the NHRA professional categories will race at the storied facility.