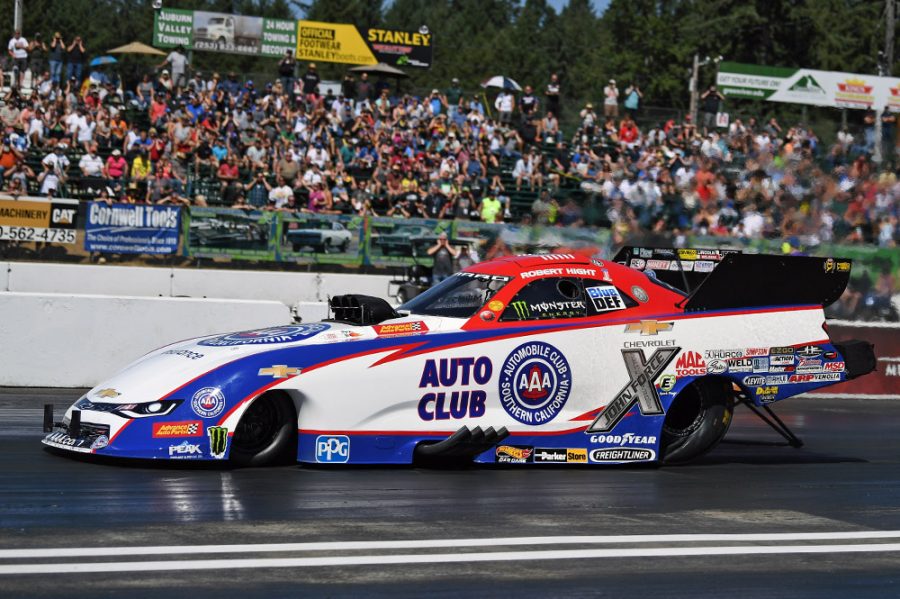 KENT, Wash. (Aug. 04, 2018) — Two-time and reigning world champion Robert Hight maintained his No. 2 qualifying position at the 31st annual CatSpot NHRA Northwest Nationals Saturday at Pacific Raceways just outside of Seattle. Courtney Force held onto her No. 3 position and John Force muscled his way into the No. 10 spot. In Top Fuel, Brittany Force will start race day from the No. 8 position.

Robert Hight will begin his NHRA Northwest Nationals championship defense from the No. 2 position after racing to a 3.919-second pass at 327.82 mph on Friday evening. Saturday, Hight and his Auto Club of Southern California Chevrolet Camaro SS Funny Car had a solid 4.010-second pass and smoked the tires to run 6.346-seconds but with good early numbers, a good sign as they head into similar weather conditions on race day.

“You know, we pushed it pretty hard tonight. We were trying to run 3.95 this evening and it probably just wasn’t going to happen under those conditions. The numbers looked good early on but we had one good run today and, after tonight, we also know where our limits are for tomorrow,” Hight explained. “I’m excited. We have a tough competitor with Gary Densham. He’s one of the guys that taught me how to do this back when he was at JFR. Always have to be ready for him, but I really like our chances of repeating at this race.”

In the first round, Hight will face off with Gary Densham, the man who preceded him as driver of the Auto Club Funny Car for John Force Racing. Hight is 13-0 against Densham but this will be the first time they’ve met since 2015 and the second time they’re raced at Seattle.

Funny Car points leader Courtney Force will be chasing her second NHRA Northwest Nationals victory and fifth win of the season as the No. 3 qualifier with her Friday night pass of 3.927-seconds at 325.69 mph. The winningest female Funny Car driver in NHRA history had a promising day two of qualifying on Saturday with a 3.988-second pass and a 3.999-second pass that were both quickest of the session, giving her valuable bonus points.

“The Advance Auto Parts team picked up six bonus points throughout our last two runs of qualifying on Saturday. I’m really excited about that. I feel like we’ve got a good handle on this car in the heat, which I feel is something we’ve kind of been struggling with,” Force said. “I feel good knowing that we’ve got a good car and a good setup going into race day tomorrow. Obviously, it’s going to be a tough matchup going against (Jim) Campbell in round one, but I have a lot of faith in my team led by Brian Corradi and Dan Hood and we’re going to push hard to make it a long day tomorrow.”

Force has faced Campbell 12 times since he joined the tour in 2016. She has an 8-3 advantage over him, including two wins this season in Chicago and Richmond.

John Force and his PEAK Coolant and Motor Oil Chevrolet Camaro SS had to take advantage of all four qualifying runs to earn their No. 10 position running 4.028-seconds at 318.39 mph in the final session.

After a mechanical issue that had the PEAK Coolant and Motor Oil team miss the first qualifying session, they managed to run 6.260 seconds to put them 15th at the end of Friday. Early Saturday afternoon, the PEAK Chevy Camaro put a hole out down track that forced the hot rod to swerve right and cross the center line, disqualifying Force’s 4.184-second pass. In the final session Force powered his way into the field.

“Yesterday we broke a valve. You lose a run; that was crucial. Then, in the night session it didn’t make it. Start off today they staged me way to the right. It got down there and started spinning the tires. But I needed to get it in (the field). About 600 feet, it started turning ‘em. I stayed in it and then it dropped holes which we know they’ll do and it made a hard right turn,” explained Force. “I was right straight and then it went dead right. I caught it. But to come back in this last session. Jon Schaffer and this team, Ronnie Thompson, Joe Veyette, everybody worked. We had all kinds of problems but these kids fixed it, gave me a race car and we’re in the show.”

Force will face a familiar rival in Tommy Johnson Jr. to open “The Show” tomorrow. Force holds a 35-15 record over the veteran racer.

Reigning Top Fuel world champion Brittany Force will be racing Sunday for her first Wally at Pacific Raceways from the No. 8 position off the efforts of her Friday afternoon pass of 3.785-seconds at 326.32 mph. After a stumble on Friday night, Force ran consistent throughout the heat of Saturday qualifying with the quickest run of the third session at 3.807-seconds and the third quickest run of the fourth session at 3.808-seconds.

“I’m excited to be here in Seattle. I’m hoping we’re turning things around. We’ve been struggling a little bit, especially on race day but we’re off to a good start this weekend,” explained Force. “We’ve had three solid passes down the track. Very consistent with a 3.807 and a 3.808. Facing Richie Crampton again and hoping to have a long day tomorrow. Go some rounds with this PEAK Monster Energy team and see what we can do.”

Force will face Richie Crampton in the first round for the second straight race. She beat him last week at Sonoma, Calif.

Eliminations at the CatSpot NHRA Northwest Nationals begins Sunday at 11 a.m. You can catch the finals live on FOX Broadcasting Network beginning at 4 p.m. ET.