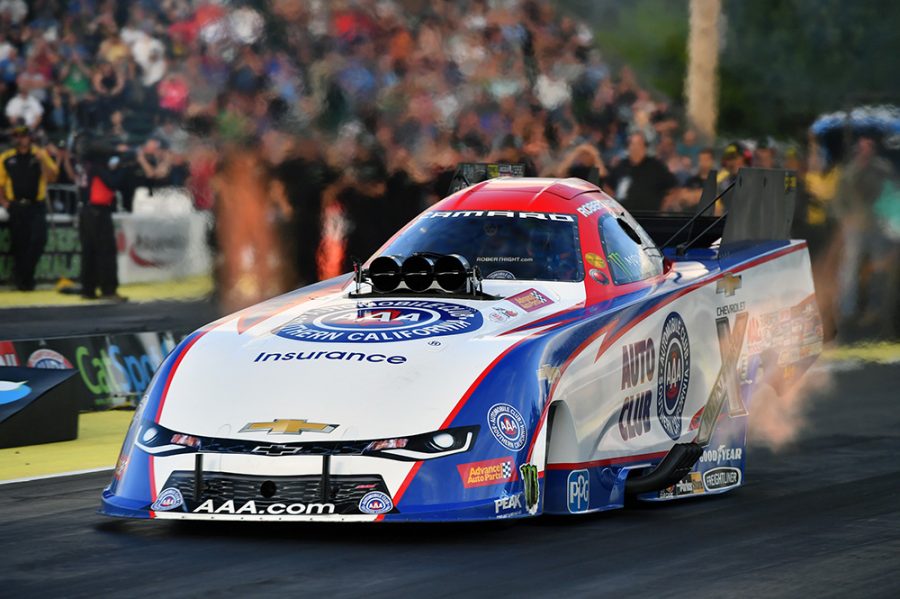 KENT, Wash. (Aug. 03, 2018) — Robert Hight and his Auto Club of Southern California Chevrolet Camaro SS Funny Car team raced to the provisional No. 2 position Friday at the CatSpot NHRA Northwest Nationals. Courtney Force, who has dominated the Funny Car class, is currently No. 3 and John Force rounds out the John Force Racing Funny Cars in No. 15. In Top Fuel, Brittany Force landed in the No. 8 position.

After racing to the event win in Sonoma, Calif. last weekend, Robert Hight and his Auto Club team are hoping to keep the momentum going at Pacific Raceways, where Hight is the defending winner and No. 1 qualifier. They’ll start day two of the 31st annual event from the No. 2 position after a strong showing in the second session, they ran a 3.919-second pass at 327.82 mph after shutting off early with a hole out during the first session.

“We dropped a cylinder on the first run and then to go up there and run as well as we did without a run under our belts is pretty impressive,” Hight said. “These guys really believe they are onto something after Sonoma and the numbers are showing it. When you look at it, the numbers are flying. They also believe there is a lot more left in it. Tomorrow, even if the track is 10 or 15 degrees hotter, they still think they can run the same. I am pretty impressed. We got two points tonight and we are in third by only eight points behind Ron Capps. Our goal is to go into Sunday in second place. So far so good.”

It was a bumpy start for all three John Force Racing Funny Cars in the first session of qualifying, while Hight had a hole out Courtney Force shut-off early and John Force didn’t make a pass after a mechanical issue.

Courtney Force, who has only qualified outside the top 10 once this season, is in the No. 3 position off a solid 3.927-second pass at 325.82 mph from the second qualifying session. During the first session, Force and her Advance Auto Parts Chevy Camaro shook the tires and shut off early to cross the finish line at 8.087 seconds.

“We were looking for a good run on the first pass out. Unfortunately, we experienced some severe tire shake. I had to get off the throttle of the Advance Auto Parts Camaro but my team got it back together for Q2,” Force said. “We were able to have a pretty awesome run and wind up third quickest of the session. We got to see what Robert ran and then we were able to get aggressive too. We came close to his number and I am really proud of my team. This was a good start and we had a good turnaround from the first session to the second. We will be looking to improve all day tomorrow.”

John Force, after a semifinal finish and a win in the last two races, will be looking forward to Saturday qualifying to elevate his PEAK Coolant and Motor Oil Chevy Camaro out of the No. 15 position. The 16-time world champion didn’t take his first qualifying pass after his crew felt there was a problem with his Camaro. In the second session, Force, racing side-by-side with daughter Courtney, experienced tire shake and ran only 6.260-seconds at 105.47 mph.

“We were just too aggressive that second run. I think we are No. 2 and No. 3 with Robert and Courtney, though, and Brittany is up there at No. 8,” explained Force. “We are going to get our car fixed. It broke a valve on the burn out before the first run. We had to shut the car off and we couldn’t make a run in Q1. On the last run it just shook. It is tough to lose a run with the night time conditions but we will get them tomorrow. We will be okay.”

The Top Fuel reigning world champion, Brittany Force, took her PEAK Coolant and Motor Oil Monster Energy dragster right off the trailer to run a 3.785-second pass at 326.32 mph but, opposite from teammates Robert and Courtney, struggled in Q2, smoking the tires to 6.944.

“That first run we went up there and it went straight down the track that second pass we shook the tires off of it,” Force said. “The points reset in Indy so we start over. Right now, we are looking for a win and we would love to win in Seattle. We have never won here. It would give us some momentum going into Brainerd.”

Qualifying at the 31st annual CatSpot NHRA Northwest Nationals continues Saturday with two sessions at 2 p.m. and 4:30 p.m. Eliminations are set for Sunday at 11 a.m. Watch the finals live on FOX Broadcasting Network at 4 p.m. ET.