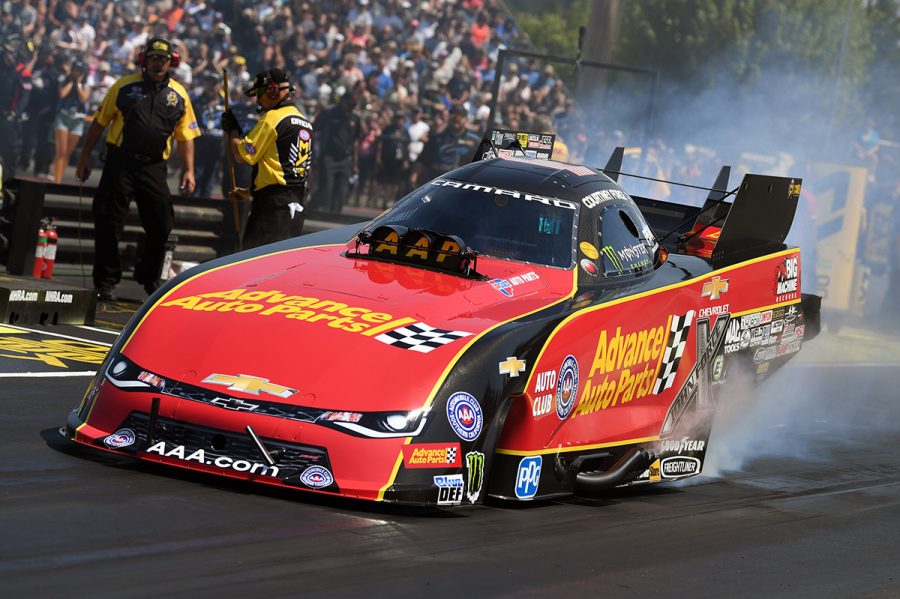 KENT, Wash. (Aug. 05, 2018) — Courtney Force and the Advance Auto Parts Chevrolet Camaro SS team raced to their career best sixth final round of the season Sunday at the CatSpot NHRA Northwest Nationals ending the day with their second runner-up finish. Robert Hight made a quarterfinal finish and John Force and Brittany Force ended their racing early in the first round at Pacific Raceways outside of Seattle.

Entering race day as the No. 3 qualifier, Courtney Force powered her Advance Auto Parts Chevy Camaro past familiar foe Jim Campbell in the first round of eliminations. Both Force and Campbell left the starting line early but Force’s light of -.015 compared to Campbell’s -.296 allowed her to move on to the second round while he earned the red-light.

In the semifinals, Force raced against veteran Tommy Johnson Jr., who had just defeated her teammate Robert Hight in the second round. Force had the better car driving past Johnson Jr. to 4.011 seconds at 320.20 mph defeating his 4.062 at 316.08. The finals were another classic John Force Racing versus Don Schumacher Racing duel with Force lining up with Ron Capps.

Force had a narrow lead off the starting line but an engine problem had Force seeing Capps driving around her at the eighth mile. The Advance Auto Parts Chevy crossed the line at 4.115-seconds and 255.63 mph, not enough for Capps’ 4.033 and 314.90. It is Force’s 29th career final appearance and 17th runner-up finish.

“It was a great day in Seattle, closing out the Swing for the Advance Auto Parts team. We fought hard to try to finish off the Western Swing with a win so we could sweep it for John Force Racing. We came close and I’m just feeling really good with the fact that we picked up a lot of bonus points, qualified in the No. 3 spot going into the race, and have found a lot of consistency with this race car,” said Force. “We struggled a little with consistency through the rest of the Swing and it feels good that we have it figured out now. We can move forward to Brainerd and feel good about the race car that we have. Our Chevy Camaro has been flying and we had a solid car all day long.

“The final round we had Ron Capps covered,” continued Force. “We hurt a piston and the pan pressure shut us off and he went by us for the win, but it was still a good day for everybody at Advance Auto Parts, for Chevrolet, PEAK, Monster Energy, Auto Club, PPG, Big Machine – all of our sponsors. We’re going to turn our focus to Brainerd and leave here feeling positive.”

Reigning Funny Car world champion Robert Hight, fresh off a win in Sonoma, Calif., raced his Auto Club of Southern California Chevrolet Camaro to the quarterfinals. Hight ran the quickest pass of race day in the first round, blasting to a 3.950-second pass at 320.36 mph to take down Gary Densham. In the second round, Hight faced-off with Tommy Johnson Jr. who raced past Hight’s boss and mentor John Force in the first round. Johnson Jr. got the better of the 43-time winner running 4.074 seconds at 318.09 mph to Hight’s 4.551 at 215.37 after smoking the tires.

“This Auto Club Chevy ran low ET of race day first round. That was killer. We just didn’t back it down enough second round, we were a little too aggressive. We’re learning still but, the good news is the performance is there. We just need to get some consistency. When we get it right, I feel we are going to be quicker than the rest of them,” Hight explained. “We’re going to Norwalk this weekend for Night Under Fire so we’ll get to do some testing, some learning. That’s how you get better so I’m excited for that. Then we roll into Brainerd and we need to put a win on the board before we get to Indy.”

Sixteen-time champion John Force and his PEAK Coolant and Motor Oil Chevy Camaro team closed out the Western Swing with a win in Denver, a semifinal finish in Sonoma, Calif. and a first-round exit at Pacific Raceways. The winningest driver in NHRA history is solidly eighth in points despite smoking the tires to a 5.598-second pass at 138.27 mph that was bettered by Tommy Johnson Jr.’s 4.177 pass at 201.74.

“We have a lot of work to do to get this PEAK Chevrolet ready for the Countdown. We’re up there in the Countdown, still eighth. We’re holding our own with two races to go. I’d like to win Brainerd or Indy to get that 150th (career win). I know I act like it isn’t a big deal, but it really is. And I’d like to focus on winning the championship when I get to the Countdown.”

Brittany Force and the PEAK Coolant and Motor Oil Monster Energy team ended qualifying at the Northwest Nationals optimistic for race day after three consistent passes. However, Sunday didn’t go quite as planned. Force, the defending Top Fuel world champion, entered into a pedalfest with first round opponent Richie Crampton. Force was unable to pedal her way around Crampton, crossing the finish line with a 4.429-second pass at 238.72 mph to Crampton’s 4.308 at 274.94.

“This team is still struggling a little bit. We have two more races before the Countdown is on and we have to hang in there. We’re eighth right now, but we really have to go some rounds the next two races to make sure we’re safe in there, and then it’s time to hit hard in that Countdown,” said Force, who has one win this season. “We get a weekend off before going into Brainerd, where we’ve had some luck. We’ve won there before and we always seem to do really well there. Maybe that will be our weekend. We did improve this weekend in qualifying. We made three out of four awesome runs, so that’s always a positive. Race day, I think we could have had a good run but drove it out of the groove a little bit and that’s where it went up in tire smoke and couldn’t seem to catch Crampton.”

After a weekend break from NHRA drag racing and half the team heading to Night Under Fire in Norwalk, Ohio, John Force Racing continues on the Mello Yello Drag Racing Series circuit with the Lucas Oil NHRA Nationals at Brainerd International Raceway in Brainerd, Minn., August 17-19.