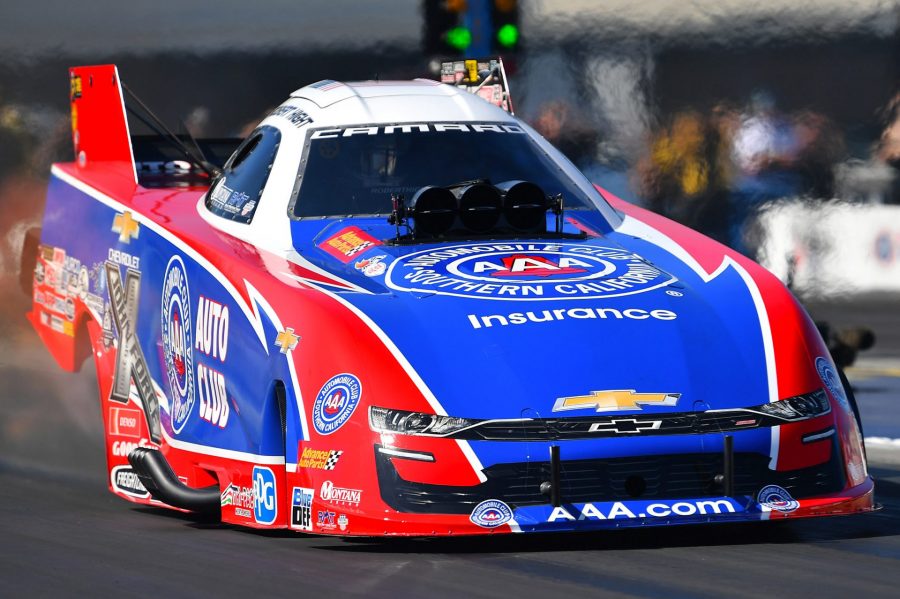 LAS VEGAS (Oct. 30, 2019) — Points leader and regular season champion Robert Hight and the Automobile Club of Southern California Chevrolet Camaro SS team are headed to the Dodge NHRA Nationals presented by Pennzoil, NHRA’s fifth of six playoff events in the Countdown to the Championship, with momentum on their side as they continue to battle for a third Funny Car championship.

Since taking home the Wally at the season opening Winternationals at Auto Club Raceway at Pomona, Hight and his two-time championship team have commanded the Funny Car class in what has been a career-best season for the 15-year racing veteran. With a total of six wins, including a milestone 50th career victory at the Sonoma Nationals and career best sixth win of the season at the Carolina Nationals, two runner-up finishes, five semifinal appearances and eight No. 1 qualifiers, the hopes of clinching the Funny Car title is well within reach.

Two weeks ago, at the AAA Texas NHRA FallNationals, Hight handled his Auto Club Chevy to the No. 2 qualifying spot after lighting the scoreboards with a stellar 3.851-second pass at 335.07 mph. He continued the momentum on race day with two steady passes in the .90s but a rare foul start in the semis would keep him from the final.

“We had a great race car in Dallas and unfortunately driver error cost us the final, but we left with an even bigger points lead than when we entered the event so our focus is to continue to maintain that and keep ahead of everyone,” said Hight who is leading the Funny Car class by 70 points. “This Funny Car field is so competitive this season. The points battle is so tight, the level of performance has been incredible from everyone, so we’ve really got to stay focused and keep up the hard work this team has been putting in all season long.”

The two-time Funny Car world champion has made an impression at The Strip at Las Vegas Motor Speedway having totaled five wins and seven No. 1 qualifiers combined at the spring and fall events. Prior to the four-wide format that was introduced two years ago in the spring, Hight made his way to the winner’s circle three times and picked up four No. 1 qualifiers. At the fall event, he’s won twice, once in 2009, the year he won his first championship, and again in 2015. He also had three consecutive No. 1 qualifiers from the fall event in 2006, 2007 and 2008.

“I always enjoy going to Vegas. I’ve had success there in the past and a win there would be really good for this Auto Club team. I’ve been saying it all season long but I think we’re going to need seven or eight wins to really put a gap in the points lead,” said Hight who has 12 Countdown wins throughout his career, the most by any Funny Car driver. “This race is important but so is the next one. I really believe this championship is going to come down to the Auto Club Finals, it could be the last day, the last pass, that determines the title and we’re ready for it.”