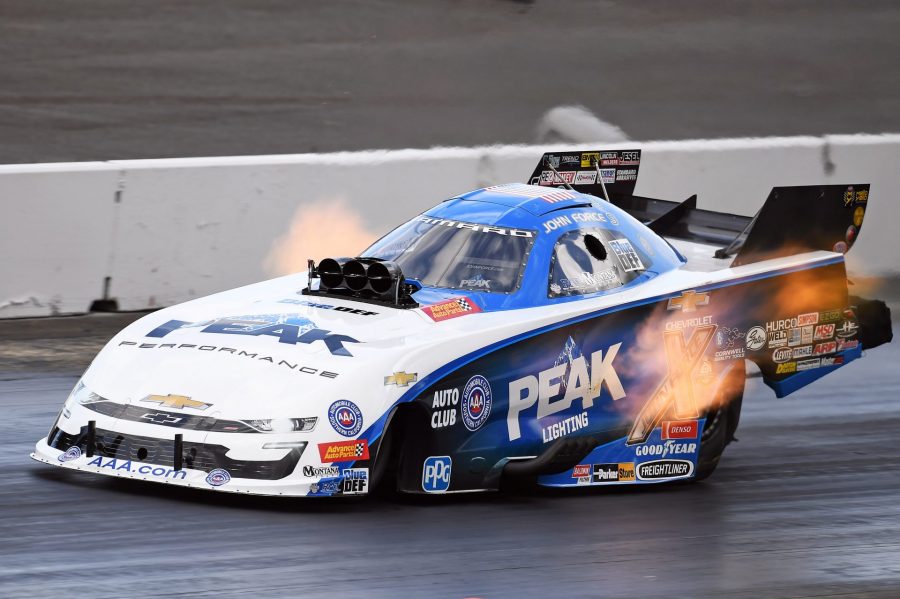 LAS VEGAS (Oct. 30, 2019) — Back in the PEAK Lighting colors in which he won his iconic 150th NHRA career victory, racing legend John Force will continue the chase for an unprecedented 17th Funny Car championship title this weekend when he makes his way to The Strip at Las Vegas Motor Speedway for the Dodge NHRA Nationals presented by Pennzoil.

In his 43rd year, the sixteen-time Funny Car world champion has accomplished more than most could dream of. He’s achieved a most sought-after 150th career Wally, won the biggest event of the year, the U.S. Nationals, that tied him with Ed McCulloch for most Funny Car wins at the event, will finish in the top 10 for the 35th consecutive year, an NHRA record, and has qualified No. 1 alongside daughter Brittany Force twice to make NHRA history as the first parent-child duo to clinch the top spots together. Now, as he enters the 23rd event on the Mello Yello tour and fifth of six playoff races in the NHRA Countdown to the Championship, the winningest driver sits third in the points standings, only four points shy of second.

At the recent event in Ennis, Texas, outside of Dallas, Force launched his 11,000-horsepower PEAK Chevy Camaro SS to the No. 1 qualifier spot for the fifth time of the season, 160th of his career and for the second time alongside daughter Brittany Force. Like teammates Robert Hight, Austin Prock and Brittany, he too would have a strong start to race day making three quality passes in the .90s but would come up short in the semis.

“This PEAK Lighting Chevy team has given me a great hot rod all season. We didn’t get a win in Dallas like we were hoping for but we’re 79 points from first and there’s points and half in Pomona in a couple weeks, so we’ll see what we can get done at this next one in Vegas,” said Force. “Brian Corradi, Danny Hood and Tim Fabrisi, and everyone of the PEAK guys, they’ve worked really hard and now I have to do my job out there but I love being in the car, in front of the fans. It just makes you feel alive. I’m ready for the next one.”

The Hall of Fame team owner and driver has seen success at The Strip that’s visited by the Mello Yello tour in both the spring and fall. He has a total of six wins and three No. 1 qualifiers at the facility. At the spring event, Force took home two Wally’s in 2010 and 2015 and also snagged two No. 1 qualifiers in 2002 and 2011. At the fall event, he’s won four times including once in 2013, the year he achieved his historic 16th Funny Car title. He also has one No. 1 qualifier from the same year.

“I love coming to Vegas. It’s always a good race to come to and Bruton Smith really puts on a good show for the fans. I’ve won here a few times. The last time I won a championship I won here so it would be nice to do that again,” said Force. “We’re getting close to the end of the season, one race left after this weekend, so we all really need to stay focused. The championship could be around the corner for any one of us.”