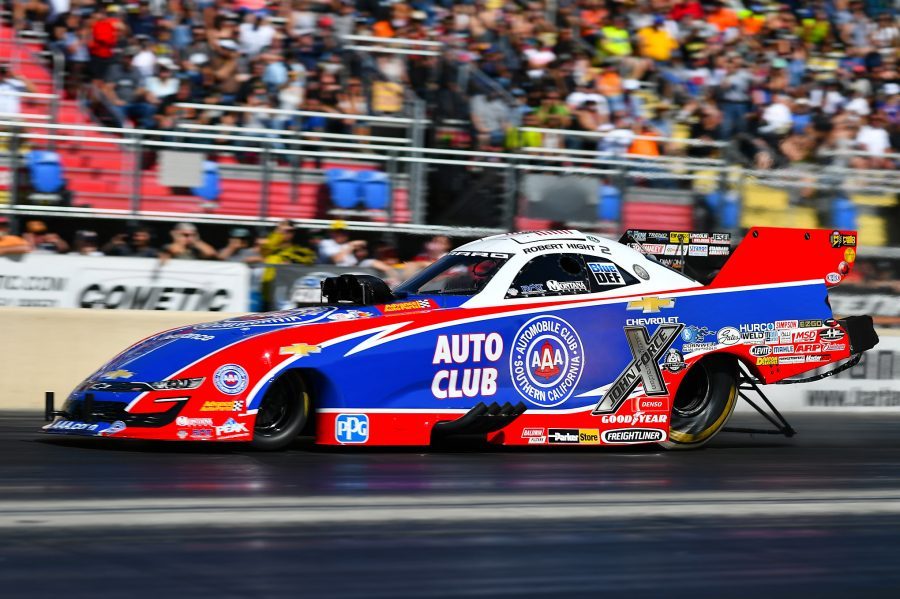 MORRISON, Colo. (July 17, 2019) — With a stronghold on the Funny Car class, Robert Hight and the Automobile Club of Southern California Chevy Camaro SS team are headed to the 14th event on the NHRA Mello Yello Drag Racing Series Season schedule, the Dodge Mile-High NHRA Nationals Presented by Pennzoil, eager to secure their fifth win of the season.

With five races until the Countdown to the Championship, NHRA’s six-race playoffs, a third championship for Hight and the Auto Club team isn’t far out of reach. In the first 13 events of the season Hight has powered his Jimmy Prock and Chris Cunningham tuned Chevy Camaro to four wins, two runner-up finishes and six No. 1 qualifiers. Of his six green hat starts, two put Hight in the NHRA history books; at the Gatornationals he became the first driver since 1987 to string together a trio of No. 1s, and again at the Southern Nationals became the first since 1987 to be No. 1 in five of the first seven events. Hight also had a double-up win with teammate Brittany Force for the third time at the SpringNationals in Houston.

After retiring his hot rod that picked up five wins and six No. 1 qualifiers in 114 runs, Hight got in the driver’s seat of a brand-new car for the at the most recent New England Nationals where he ended laying down a solid 4.046-second pass at 322.65 mph to jump from No. 11 to No. 4. On race day, the two-time Funny Car world champion took a first-round win but would make a quarterfinal exit.

“We didn’t end our weekend in Epping like we wanted to but we kept the points lead so I’m happy with that. You know, it’s tough, we have a new car, my guys built a new chassis before heading to New England, so there’s some things we need to figure out but I’m more than confident in this team and I know we’ll get things turned around for Denver and this Western Swing,” said Hight. “We had another week off and everyone has been hard at work. I was in Indy at the shop and I’m just really impressed with everyone. I’m excited to see what we can do and to get Auto Club back in the winner’s circle.”

At Brandimere Speedway, Hight already has a bit of history on his side. In 2005, his rookie season, he qualified No. 1 and picked up his second NHRA career win and first of four at the facility, Hight also has wins from 2010, 2014 and 2017. Of his four wins, two have been over John Force Racing owner and Hight’s mentor, John Force. At last year’s Mile-High Nationals, Hight qualified third and exited in the semi-finals to rival Ron Capps.

“It’s always exciting to get to Denver. It’s the first of the Western Swing and I’ve been successful there a handful of times. I’ve won there four times and in my rookie season, so it’s always a special place to get back to each year,” said Hight. “The Auto Club team has been working really hard all season long and I’m looking forward to showing what we’re made of heading into this three in-a-row. The Countdown isn’t far now.”