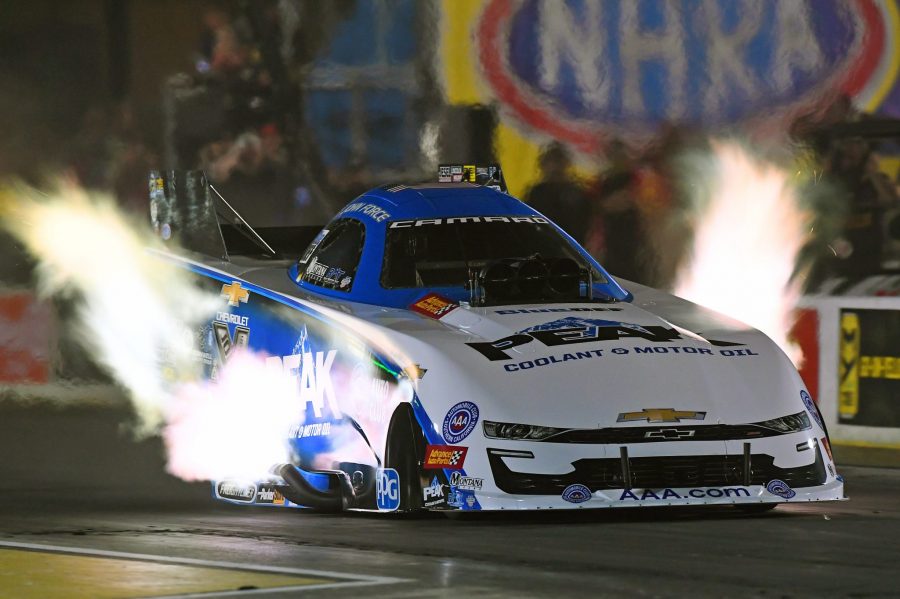 MORRISON, Colo. (July 17, 2019) – In the extreme sport to which he has dedicated himself the last 43 years, John Force is the undisputed “King of the Mountain,” a title he will try to defend this weekend when the NHRA Mello Yello tour returns to Bandimere Speedway for the 40th renewal of the Dodge Mile-High NHRA Nationals presented by Pennzoil.

In an event contested at 5,600 feet, the highest altitude at which Funny Cars like Force’s PEAK Coolant and Motor Oil Chevy Camaro SS race during a 24-event season, high performance engines, just like people and animals, struggle to breathe. Success demands parts and pieces used at no other time assembled using skills mothballed for 362 days every year.

The challenge to perform in such a unique environment is one Force and his team have embraced since they first participated in 1980. After a rather inauspicious start – a first round loss and a qualifying failure in his first two appearances, the sport’s biggest winner conquered Bandimere’s mountain for the first time in 1994.

He won again in ’95 and ’96 and, over the last 25 years, has prevailed in virtually every third start. In addition to eight wins, he’s been runner-up three times the last quarter century, twice losing to teammate, John Force Racing president and current Mello Yello points leader, Robert Hight (2010 and 2014). Force has one more win at Bandimere than Pro Stock drivers Bob Glidden and Allen Johnson, whose success in the Mile-High Nationals is considered the stuff of legend. Force was also the first driver, regardless of classification, to break the 300 mile-per-hour barrier at Bandimere (1996).

This week he’ll try to add to his mountaineering mystique by winning the tour’s toughest event with veteran tuner Brian Corradi, who came over to John Force Racing a year ago after distinguishing himself as crew chief when he won Top Fuel championships in 2012, 2015 and 2016.

“We’re all ready to start the Western Swing and get to Denver. Bandimere has always been a good track to me. I’ve won there a few times and last year got my 149th win, so maybe 150 will come this weekend, we’ll see,” said Force. “We’re second in the points standings and I’m happy with that. Now, I just have to do my job in the driver’s seat but I’m confident and ready.”

While the new crew-and-driver combination has yet to produce a win, one that would be the milestone 150th of Force’s career, it has made an impression. Force has started three races from the front of the pack and has pushed the PEAK Camaro to the semifinals or beyond eight times while advancing as high as second place in points, the position he currently occupies.

The overall combination of crew, car and driver has been good enough, in fact, to interject Force into the 2019 championship conversation at an age when most of his contemporaries are thankful just to be able to make conversation.

“I missed that shot at 150 in Epping but we’re headed to Denver this weekend and I’m excited to get back. I have a great race car, a great team and its coming. Brian Corradi and Danny Hood, all my PEAK guys, they’ve been working hard and I’m proud of them,” said Force. “Robert and I were out at Baldwin Filters earlier this week and that was great to meet with those sponsors and they’re employees. Tomorrow, me and Brittany and the Prock kid are going to Gates Auto in Denver, and it’ll be good to see them. All of our sponsors have been great and I’m hoping we can get them in the winner’s circle this weekend.”

Prior to hitting the track on Friday, Force and his daughter, Brittany Force, along with teammate Austin Prock will be making a special appearance at the Gates headquarters in downtown Denver. Gates provides the four John Force Racing hot rods with Gates Poly Chain Nitro belts, a vital component in getting the 11,000 horsepower machines down the track safely and successfully.

Qualifying for the Dodge Mile-High NHRA Nationals begins Friday with nitro sessions at 5 p.m. and 8 p.m. Nitro Funny Cars and Top Fuel dragsters will qualify at the same times on Saturday leading into eliminators at 11 a.m. Sunday. Check out coverage on FS1 starting with Friday Night Nitro from 7-8:30 mph, Eastern time. Coverage continues with eliminations from 3-6 p.m. Sunday.