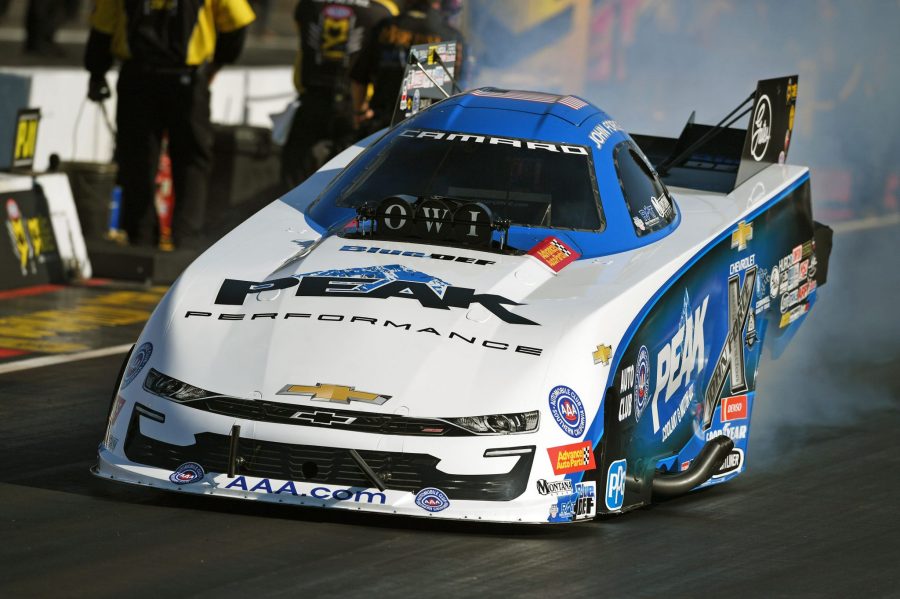 MORRISON, Colo. (July 19, 2019) — Racing legend John Force and the PEAK Coolant and Motor Oil Chevrolet Camaro SS team are sitting in the No. 4 spot after Friday’s qualifying at the Dodge Mile-High NHRA Nationals presented by Pennzoil at Bandimere Speedway. Teammate Robert Hight and the Automobile Club of Southern California team are currently No. 6 and, in Top Fuel, rookie Austin Prock is No. 9 with his Montana Brand / Rocky Mountain Twist dragster and Brittany Force is No. 10 with her Carquest Brakes team.

Looking for a repeat win at Bandimere Speedway, Force started Friday’s qualifying with the third quickest pass of the category when he powered his PEAK Coolant and Motor Oil Chevy Camaro SS to a 4.440-second pass at 231.24 mph after losing traction and shutting off early. Like much of the Funny Car class, in the night session, Force improved running a 4.051-second pass at 305.70 mph to end the day in the No. 4 spot.

“It feels really good to come up here in this altitude, in the heat and watch the people pack these stands. The second session was one of the best I’ve seen all year. Bandimere knows what he’s doing and we gave the fans a pretty good show,” said Force. “We ended up going fourth but we have a long way to go tomorrow and it’ll be cooler tomorrow.”

Like teammate John Force, Robert Hight and the Automobile Club of Southern California Chevy Camaro SS team lost traction down track in the first qualifying round to make a 4.380-second pass at 229.00 mph but would pick up two bonus points for being second quickest. During the second qualifying session, Hight ran his Chevy Camaro to 4.145-seconds at 307.37 mph to start Saturday’s qualifying from the No. 6 position.

“We were trying some things out today, on both those runs. We’ll be going back to our normal set up tomorrow so I’m not concerned,” Hight said. “Jimmy Prock and Chris Cunningham will have this Automobile Club of Southern California Chevy dialed in. It’ll be good. Conditions will be better, a little cooler which will help us when it comes to Sunday since it’s supposed to cool way down. Should be a good day tomorrow that sets us up for a good race day.”

Third-generation driver Austin Prock started Friday’s qualifying with a 4.793-second pass at 164.09 mph after hazing the tires of his Montana Brand / Rocky Mountain Twist dragster to end the session in the No. 7 spot. In his second pass, Prock lost traction and had to shut off his Mike Green and Ronnie Thompson tuned dragster to run a 5.236-second pass at 138.23 mph that moved him up two spots into ninth.

“We ended up ninth after a tough start in Denver. This place is tricky and you never really know what to expect coming here especially in our circumstances where we’ve never used John Force Racing parts in a dragster up on the mountain before, so we kind of came in here shooting from the hip,” said Prock. “The first run, it was close. It dropped a cylinder but the fuel system was really close and in the second run, it just overpowered the race track. It almost made it but chattered the tires right before the 330-foot mark. I kept my foot in it and thought it was going to hang on but it knocked them loose. We’ll take what we learned today and transfer it over to tomorrow and the conditions are going to be noticeably different for tomorrow and Sunday, so hopefully we can get in the groove and go some rounds Sunday.”

Brittany Force and the Carquest Brakes dragster team had trouble in the first qualifying session when a malfunction in the fuel control system caused Force to shut off her 11,000-horespower dragster after the burnout. In Friday’s second session under the lights, the 2017 Top Fuel world champion smoked the tires and dropped cylinders to run a 5.405-second pass at 123.95 mph. She’ll start Saturday’s qualifying from the No. 10 spot.

Qualifying at the Dodge Mile-High NHRA Nationals at Bandimere Speedway continues Saturday with sessions at 5:00 p.m. and 8:00 p.m. Catch the action at 1:00 p.m. ET on FOX Sports 1 (FS1). Eliminations will take place Sunday at 11:00 a.m. with finals coverage starting at 3:00 p.m. ET on FOX Broadcasting Network.