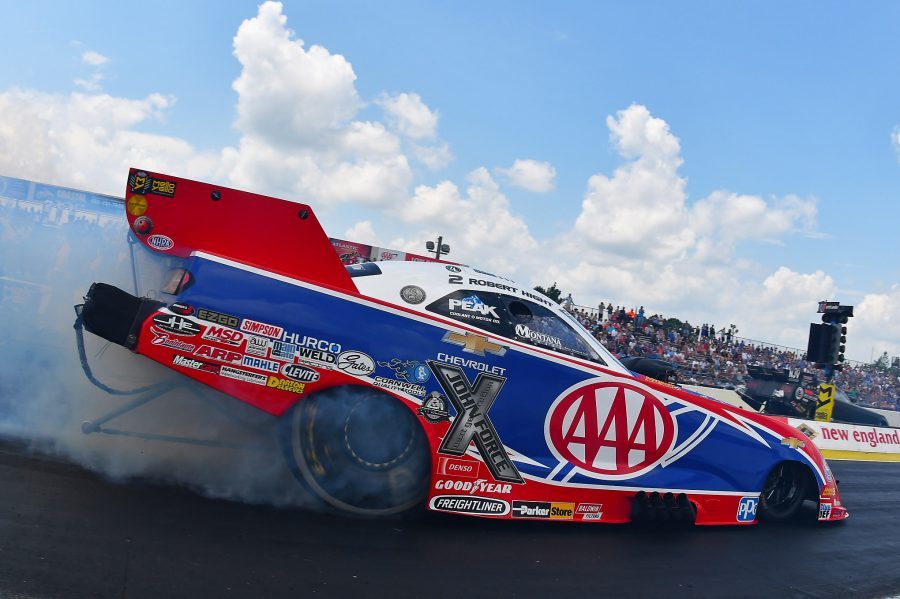 EPPING, N.H. (July 6, 2019) — Robert Hight and the AAA Northern New England Chevy Camaro SS team will start race day at the NHRA New England Nationals at New England Dragway from the No. 4 qualifier spot. Before a rain delay canceled the last session, Hight laid down an impressive 4.046-second pass at 322.65 mph to post the top speed of the group and move up the ladder into the No. 4 position from No. 11.

Coming into Saturday qualifying sitting at the bottom of the Funny Car field, Robert Hight and the AAA Northern New England Chevy Camaro team turned things around in the third and only qualifying session on Saturday. The two-time Funny Car world champion powered his hot rod to a stellar 4.046-second pass at 322.65 mph to be the second quickest and land the No. 4 spot. Heading into race day, Hight will be chasing his first win at New England Dragway, fifth of the 2019 NHRA season and a milestone 50th of his career.

“It’s a bummer we didn’t get to make a Q4 run but I’m pretty proud of the guys, a 4.04 with a new set up and a new car and there’s room, there a lot left in it. If we could go up there in those same conditions again, I believe we could run in the threes,” said Hight who will face Terry Haddock in round one. “I think that positions us pretty good for Sunday. I think I’ve won the last three AAA races (St. Louis 2018, Dallas 2018, Houston 2019) and I want to make it four.”

John Force ran his PEAK High Mileage Motor Oil Chevy Camaro to a 4.054-second pass at 313.88 mph in the third qualifying session to jump from the No. 10 spot to No. 7. In his career, the driving legend has been to the finals 11 times from the No. 7 qualifier spot with six wins. He’ll be looking for his second victory at the facility. The sixteen-time Funny Car world champion is set to go head-to-head with longtime rival, Cruz Pedregon, in the first round of eliminations.

“Well, tomorrow we got the same chance everyone else has. I wish we could have had that last qualifying session but this PEAK High Mileage Motor Oil Chevy did get moved up to seventh and all my cars are well in it,” said Force who has competed against Pedregon more than any other driver in his 43-year NHRA career. “Tomorrow, here at New England, we’ll see what we can do. I’m looking forward to seeing all the fans, they always pack them in here on Sunday. Let’s think positive and let’s get 150.”

Rookie of the Year candidate Austin Prock and the Montana Brand / Rocky Mountain Twist team had trouble in the third qualifying session when they smoked the tires off the starting line to run a 9.251-second pass at 83.77 mph. Prock will start eliminations from the No. 6 spot off the efforts of his 3.899-second pass at 310.05 mph on Friday night. The first-year driver is set to go up against reigning Top Fuel world champion Steve Torrence in the first round as he looks to get his first NHRA career win.

“We struggled again today and made a bad judgment on how the track was prepared, but I know this Montana Brand / Rocky Mountain Twist team will get the thing turned around for tomorrow morning. It’s going to be different conditions and I think we’ll have a good race car,” said Prock. “We race my buddy Steve-O and I’m really looking forward to that. That’s like a final round match up right there. I’ll be ready and I know he will be too and may the best race car win.”

Brittany Force opened Saturday’s qualifying with a 4.424-second pass at 188.44 mph in her Advance Auto Parts dragster after hazing the tires down track. She’ll keep the No. 7 qualifier position from her pass on Friday night when she handled her dragster to a 3.904-second pass at 292.90 mph. Force will be competing for her second win at New England Dragway when she faces Dom Lagana in round one tomorrow.

“It’s definitely a tricky weekend with this heat and a sticky race track. We didn’t get down there like we wanted to and we lost a qualifying session, but tomorrow is going to be a whole new ball game. It’s going to be a lot cooler and that’s when we tend to run good,” said Force. “This Advance Auto Parts team is hoping to really turn things around tomorrow and come out, go rounds and win this thing, that’s the plan. Like I said, we tend to run the best in cooler conditions and we might get lucky tomorrow.”

Eliminations at the NHRA New England Nationals at New England Dragway are set to begin Sunday at 11:00 a.m. Catch the live action on FOX Sports 1 (FS1) at 1:00 p.m. ET.