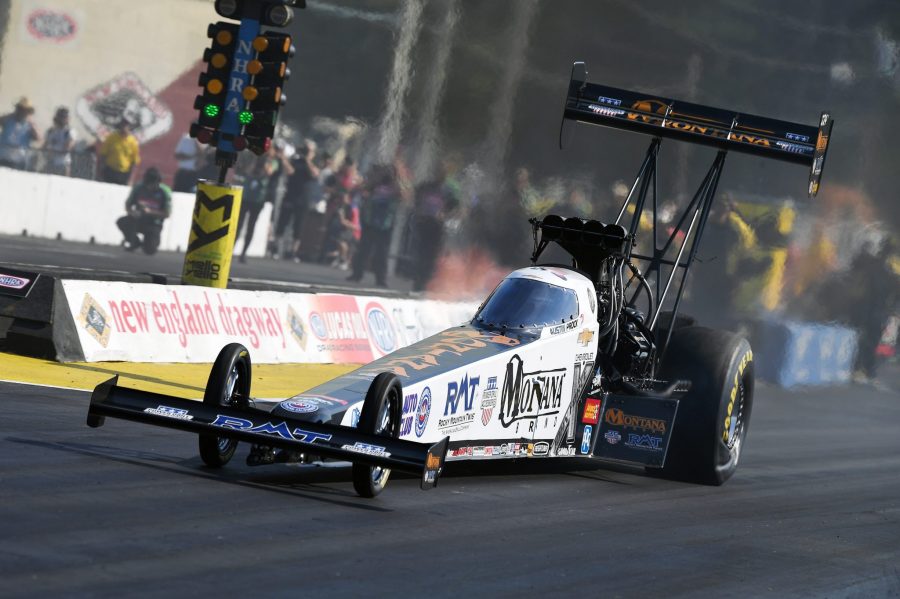 EPPING, N.H. (July 5, 2019) — Rookie of the Year candidate, Austin Prock and the Montana Brand / Rocky Mountain Twist Top Fuel dragster team sit in the No. 6 spot after Friday’s qualifying at the NHRA New England Nationals at New England Dragway. Teammate Brittany Force and her Advance Auto Parts team are currently No. 7, and in Funny Car, John Force and the PEAK High Mileage Motor Oil team are No. 10 with Robert Hight and the AAA Northern New England team in the No. 11 position.

Prock started Friday’s qualifying earning three bonus points as quickest of the session when he had to pedal his Montana Brand / Rocky Mountain Twist hot rod to a 4.214-second pass at 237.80 mph after losing traction. In the second session, the third-generation driver improved, like most of the Top Fuel class, to run a solid 3.899-second pass at 310.05 mph to end the night in sixth.

“This Montana Brand / Rocky Mountain Twist team had a pretty decent first day here in New Hampshire. We got three points in the first session for low qualifier which was really good for where we’re at in the points standings. Every point counts in these last handful of races before the Countdown starts,” said Prock. “Second run, we weren’t shooting for an .89 but it dropped a cylinder about 400 feet and moved me inside, so I was fighting that thing all the way down the race track. We landed in the No. 6 spot at the end of the day and we’re going to improve on that tomorrow.”

During her first qualifying pass at New England Dragway, Brittany Force ran her Advance Auto Parts dragster to a 5.706-second pass at 119.10 mph after losing traction and shutting off early. She improved her performance in the second session when she powered her David Grubnic and Mac Savage tuned hot rod to 3.904-seconds at 292.90 mph and would end Friday’s qualifying as No. 7.

“We’re still struggling a little bit. It’s this heat that is throwing us for a loop. I stand behind this Advance Auto Parts team with David Grubnic and Mac Savage, we’ll figure it out. Qualifying is not over and we still get two more and we’re not in a bad spot,” said Force. “We’re No. 7 right now, not a bad place to start going into tomorrow. I won this race a few years ago and our plan is to go some rounds on Sunday and do it again.”

Sixteen-time Funny Car world champion, John Force and the PEAK High Mileage Motor Oil Chevy Camaro SS team closed out round one of qualifying in a John Force Racing side-by-side with teammate Robert Hight. Force ran a 5.624-second pass at 125.26 mph after losing traction and shutting off to sit in the No. 10 spot. In the second session, the driving legend smoked the tires but improved with a 4.348-second pass at 208.39 mph to be No. 10 heading into Saturday’s qualifying.

“It’s supposed to be cooler tomorrow, maybe that will help these race cars. The other cars got down there so we have to get a strategy,” said Force. “This PEAK team knows what they’re doing and we‘ve had a good car the last couple races, so we’ll just see where it goes.”

After building a chassis on the off weekend, Robert Hight and the AAA Northern New England Chevy Camaro team smoked the tires in the first session to run a 6.368-second pass at 107.91 mph next to mentor John Force. Starting the second session on a solo run, Hight hazed the tires to make only a 6.542-second pass at 99.32 mph for the No. 11 spot.

“This wasn’t the day we hoped for but considering that we came in here with another brand-new car and we’re trying some things out in the clutch, we had a lot of new things to deal with today,” said Hight. “I feel that after two runs and with Jimmy Prock and Chris Cunningham in my corner, they’ll figure it out and we’ll be fine tomorrow. I can’t wait.”