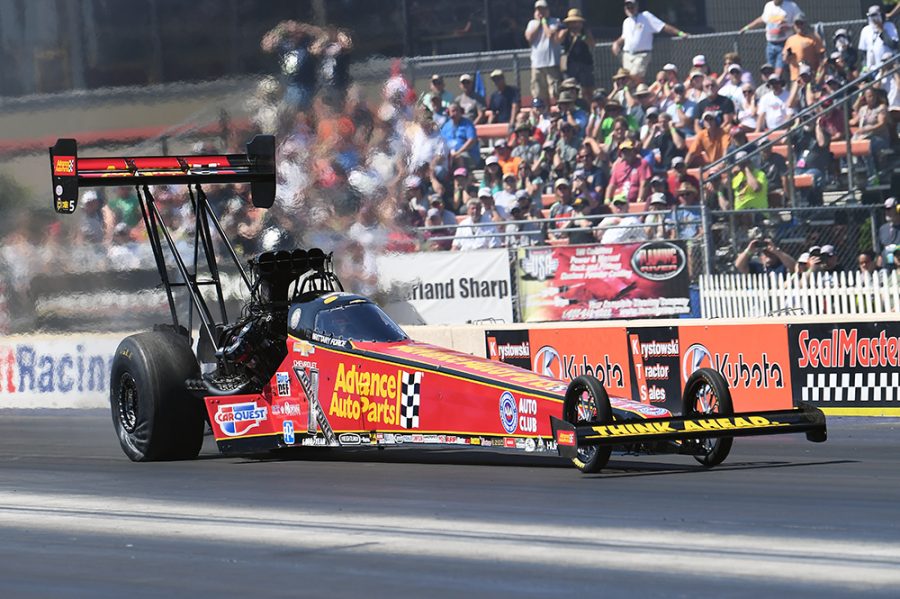 After an encouraging day of testing following the Thunder Valley Nationals, Force and the Advance Auto Parts team closed out the recent event in Norwalk, Ohio with their fourth No. 1 qualifier of the season and a semi-final finish. The 2017 Top Fuel world champion started the weekend off on a strong note when she handled her dragster to a stout 3.712-second pass at 328.38 mph on Friday night to secure the top spot. On race day Force made her way to the semis but fell short of advancing to her fourth final-round appearance to reigning Top Fuel world champion and eventual event winner, Steve Torrence.

“Our Advance team made the decision to stay after in Bristol and do some testing after a couple of tough back-to-back weekends on the track,” Force said. “Norwalk was a huge turning point for this team and we feel like we finally got our car back and are heading in the right direction. The Advance Auto Parts team grabbed a No. 1 qualifier, made a semi-final round appearance and moved up to three in points. Overall it was an awesome weekend. We ended the four-in-a-row on a high note.”

Heading into this year’s New England Nationals, Force is hoping to add to her list of season accomplishments that already includes one win, two runner-up finishes, a semi-final appearance and four green hat starts. At New England Dragway, where the NHRA first started racing in Force’s rookie season (2013), she already has a bit of history on her side. In 2017, the same year she won the Championship, Force qualified second and powered her way past rival Antron Brown in the final to pick up her first win at the facility. Force is also one of three John Force Racing drivers alongside her father, John Force and sister, Courtney Force to take home the Wally at the facility.

“That semi-final round appearance in Norwalk has me feeling confident heading into Epping,” Force said. “I’ve had success in the past at New England Dragway and this team is ready to get back in that winners circle. We’re pumped, we’re feeling good.”