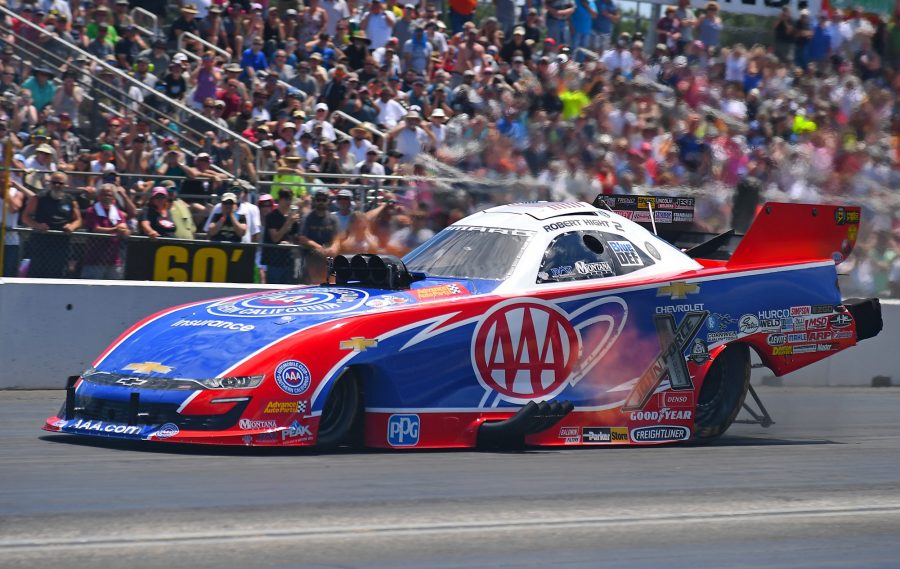 The AAA Northern New England team spent their off week building the two-time world champion a brand new chassis, a task that came after Hight retired the car that earned five wins and six No. 1 qualifiers in 114 runs that began at the 2018 AAA Texas NHRA FallNationals in Dallas, an event he won after breaking his collarbone while winning in St. Louis just one week prior. With a brand-new car Hight entered race day in the No. 4 spot after only one clean pass down New England Dragway in the last session.

Hight’s first round opponent was longtime single team racer Terry Haddock. The AAA Northern New England Camaro never trailed on the pass to run it’s quickest of the weekend at 4.037-seconds but Hight had to lift early for a speed of only 281.36 mph. Haddock would run his best pass of the weekend at 4.239 and 268.76.

By only a thousandth of a second, the AAA team would lose out on lane choice to veteran racer Shawn Langdon in the quarterfinals. Hight would lead at the start but, like his first-round pass, would shut-off early for only a 4.103-second pass at 271.24 mph, not enough for Langdon’s 3.999 at 320.51.

“With a new car and new set up, we’re figuring things out. Not the Sunday we wanted but we’ll get back to where we were. We’ll be just as good if not better,” said Hight, whose 13 consecutive races as points leader equals the longest streak of his career, he also led 13 straight in 2014. “Moving onto the Western Swing with this AAA Northern New England Chevy Camaro SS still in the points lead which gives us some room to try some things, to bring out a new car and get it tuned up to where we want it. I’m looking forward to seeing what we can do.”

John Force and the PEAK High Mileage Motor Oil Chevy Camaro team packed up early on race day after a close pedalfest to the finish line with longtime rival Cruz Pedregon. Both veteran drivers lost traction down track and had to pedal their hot rods but Force’s 4.540-second pass at 244.56 mph wasn’t enough to advance past Pedregon’s 4.511 at 257.28. The round one loss was Force’s first of the season. He was the last in the Funny Car class to acquire a first-round loss in 2019’s first 13 events.

“We’re leaving New England with the PEAK High Mileage Chevrolet still No. 2 in points, so that’s good. It wasn’t a good weekend for us and I keep missing that shot at 150, but there isn’t anything you can do about that,” said Force. “But I’m proud of this team, Danny Hood and Brian Corradi, I’m proud of this car and all we can do is move to the next race and gather up our stuff, and fix it.”

After missing out on an opportunity to better her No. 7 qualifying position due to weather on Saturday that cancelled the final session, Brittany Force would start race day as the first pair of nitro cars down the track. Lined up with Dom Lagana, both racers would leave early on the tree, Lagana by -.072 seconds and Force by -.105 ending the Advance Auto Parts team race day early. The first-round exit puts Force at just fourth in the Mello Yello points standings, only one spot from No. 3 where she entered the race weekend.

“It was a tough weekend for the Advance Auto Parts team. We had a good race car today and came out, and it was driver error. I screwed up and red lit but you learn from these things,” said Force, who last red lit at the fall event in Las Vegas 2017, the year she won the championship. “You know, I have a great support system around me, they all patted me on the back and said it’s fine, let it go and we’ll move on to the next one, so that’s exactly what we’re going to do.”

Third-generation driver Austin Prock and the Montana Brand / Rocky Mountain Twist dragster team exited first-round Sunday when they faced reigning Top Fuel world champion and eventual event winner, Steve Torrence. The pair left the starting line together with Prock making a solid 3.843-second pass at 323.19 but it was bettered by Torrence’s 3.756 at 328.62. It was the rookie driver’s best pass of the weekend in the losing effort.

“It was another tough break first round for the Montana Brand / Rocky Mountain Twist team. We were the higher qualified car but the champ absolutely threw down on us. He and I both left together with .058 reaction times but our 3.84 wasn’t enough,” said Prock. “That run put us third quick on the session and once again we were sent home early. Our car is running competitively but things just haven’t been falling our way. I’m looking forward to Denver and Mike Green has had great success there in the past. We’re going to be looking for our first win of the season.”