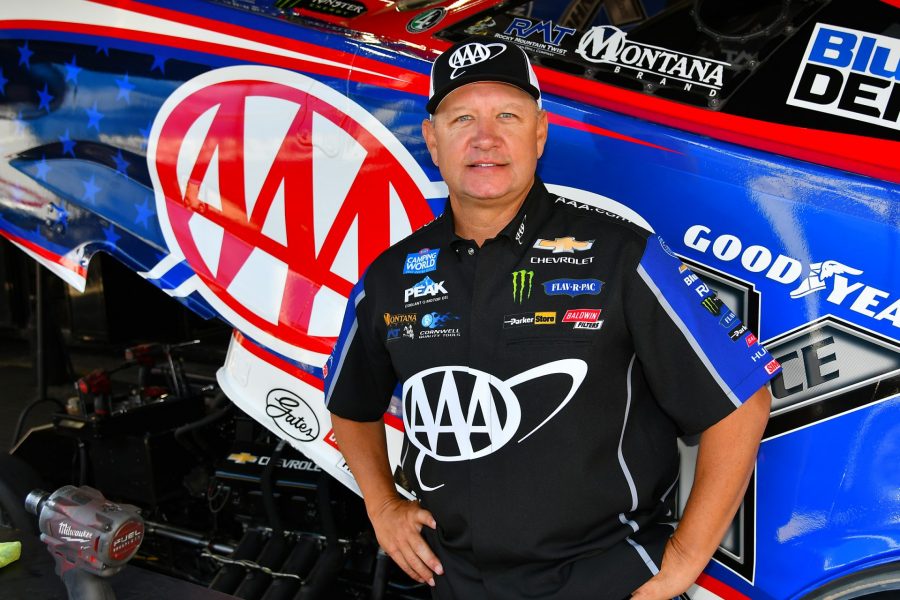 MADISON, Ill. (Sept. 22, 2021) – Sporting the AAA livery on his Chevrolet Camaro SS Funny Car for this weekend’s NHRA Midwest Nationals at World Wide Technology Raceway just outside of St. Louis, Robert Hight, the only NHRA driver to have ever won a championship starting the Countdown to the Championship from the No. 10 spot, is chasing the points lead en route to his fourth Camping World Drag Racing Series crown.

With two victories in 2021 at the SpringNationals in Houston and Sonoma Raceway’s NHRA Sonoma Nationals, two runner-up finishes at the season opening Gatornationals and the New England Nationals, and a No. 1 qualifier at the Las Vegas Four-Wide event, Hight and the AAA team know they have the right pieces to pull off another championship run. With the points standings closer than ever in Funny Car, Hight, tied for sixth and back only 72, left the first two events in the Countdown, the first at Maple Grove Raceway and the second the NHRA Carolina Nationals, with No. 2 qualifying positions at each and a semifinal and first round exit, respectively.

“We have our work cut out for us. I said it from the beginning, I believe you need to win three races in this Countdown to win the championship and I believe this AAA team can do just that,” Hight said. “We had some issues on race day in Charlotte, but we got it handled. Jimmy Prock is one of the most focused crew chiefs out here and he’s really had to poor himself into this Chevy, he and Chris Cunningham both. I’m excited for what we can do in St. Louis.”

Hight is trying to extend to four the number of consecutive seasons in which he has won a Countdown race. That’s the longest active streak in Funny Car. He leads the category in Countdown wins with 12. Hight has history on his side heading to World Wide Technology Raceway. He set both ends of the track record at 3.830-seconds and 338.60 mph on Sept. 30, 2017, has two wins (2010 and 2018) and four No. 1 qualifying positions (2006, 2016, 2017, 2018). His 2018 win is perhaps the most memorable, when crossing the line first against Tim Wilkerson in the final, Hight’s Camaro had an explosion and hit the wall, breaking his clavicle. Hight would celebrate the victory with his team several hours later back at the track in a sling.

“I’ve had some luck at World Wide Technology Raceway. And even when I had some bad luck it still had some good to it. When we wrecked in 2018, I won the race and ended up back in the seat just 10 days later,” Hight said. “I love racing here, hoping we can capitalize on our progress and gain some ground in the points battle. I know this AAA team is putting everything they have into these final five races, it’s time for their hard work to pay off.”

The NHRA Midwest Nationals at World Wide Technology Raceway kicks off with the first qualifying session on Friday evening at 6 p.m. and continues with sessions on Saturday at 1:45 and 4:25 p.m. Eliminations are slated to begin Sunday at 10:30 a.m. For television coverage, tune-in Friday at 7 p.m. and Sunday at 1 p.m. ET on FOX Sports 1 (FS1) for qualifying. Eliminations will air Sunday at 2 p.m. ET on FS1.