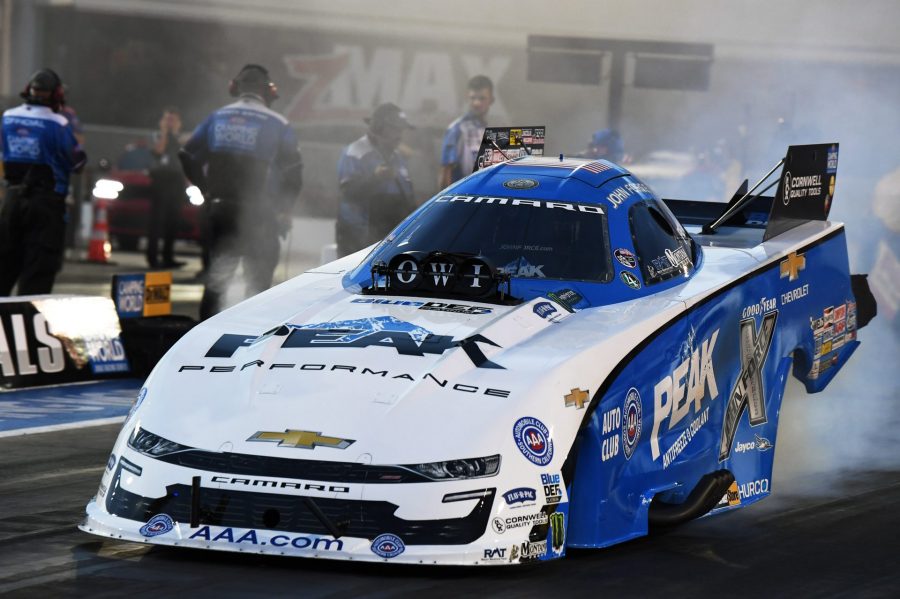 MADISON, Ill. (Sept. 22, 2021) – Sixteen-time champion John Force and his PEAK Antifreeze and Coolant Chevrolet Camaro SS team have been contenders for the NHRA Camping World Drag Racing Series Funny Car Crown from the beginning of the season. Now, heading to the NHRA Midwest Nationals at World Wide Technology Raceway just 25 points back in third, Force will be counting on his team’s consistent high performance to separate themselves from the rest of the field.

With five final round appearances that included three wins (Charlotte Four-Wide, New England Nationals and sharing the winners circle with daughter Brittany in Topeka at Heartland Motorsports Park) and three No. 1 qualifying positions (Charlotte Four-Wide, U.S. Nationals and Carolina Nationals), Force will be trying to win four races in a season for the 14th time in his career while chasing an unprecedented 17th championship.

“We’re in the thick of it. I just want to be in the hunt, I am. This PEAK team, Danny Hood, Tim Fabrisi, Joe Barlam and all the guys, they’ve put me in the hunt,” Force said. “Now I just need to do my job. We have a great hot rod with this Chevy, even with a couple mistakes, we’re right there in it.”

“St. Louis has been good to me which makes it a nice place to finish out this four-in-a-row. We’ll be putting on a show, especially with the competition in Funny Car,” Force said. “It’s going to be exciting.”

The NHRA Midwest Nationals at World Wide Technology Raceway kicks off with the first qualifying session on Friday evening at 6 p.m. and continues with sessions on Saturday at 1:45 and 4:25 p.m. Eliminations are slated to begin Sunday at 10:30 a.m. For television coverage, tune-in Friday at 7 p.m. and Sunday at 1 p.m. ET on FOX Sports 1 (FS1) for qualifying. Eliminations will air Sunday at 2 p.m. ET on FS1.