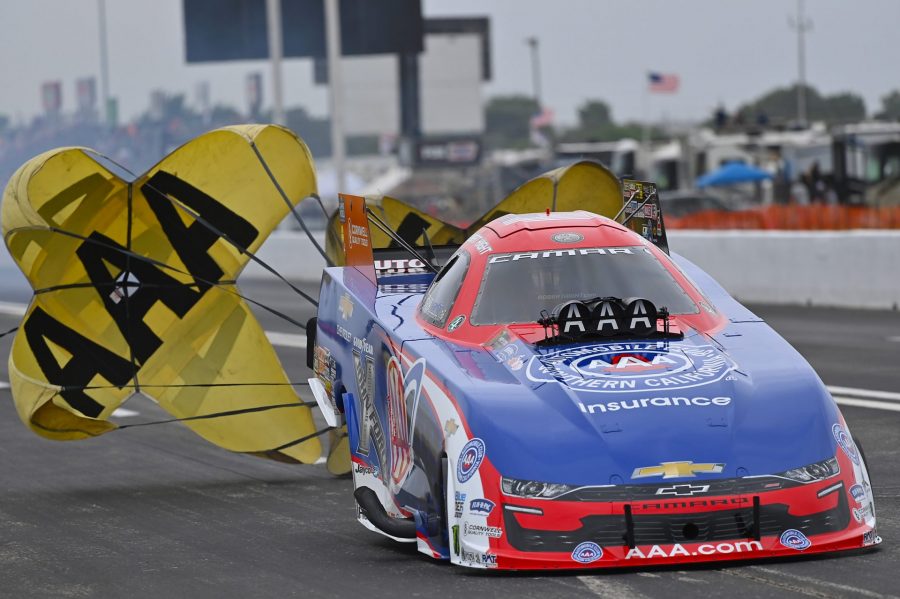 MADISON, Ill. (Sept. 24, 2021) – Robert Hight and the AAA Missouri Chevrolet Camaro SS Funny Car ended day one of the NHRA Midwest Nationals at World Wide Technology Raceway sitting No. 4. John Force and the PEAK Antifreeze and Coolant Camaro are temporarily No. 14 and Brittany Force and the Monster Energy dragster are No. 15 with two more runs tomorrow.

Hight, who is looking for his fifth No.1 qualifying position at World Wide Technology Raceway, handled the AAA Chevy to a clean 3.902-second pass at 326.87 mph to open qualifying at the NHRA Midwest Nationals.

“Not a bad start to the weekend. Two more runs tomorrow to try and improve, maybe pick up some points,” Hight said. “We’ve got some ground to cover but we have to take it one run at a time. This AAA team needs to be aggressive and get the job done. Looking forward to what we can do tomorrow to set us up for race day.”

The PEAK Chevy struggled in its first try at qualifying on Friday night. Force lost traction and had to pedal his Camaro hot rod before shutting off early for only a 5.816-second pass at 125.75 mph.

“This PEAK Chevrolet team made some changes coming into this race, we’re figuring it out. We have two more runs tomorrow. Not worried, we’ll just have to see how it goes,” said Force who is looking for his fourth No. 1 at the facility. “It’s great to be back in St. Louis at World Wide Technology Raceway, weather is beautiful so the racing should be good. We’ll put on a show so come on out.”

Top Fuel points leader Brittany Force and the Monster Energy / Flav-R-Pac team had a rare stumble during Friday night qualifying. The 10-time No. 1 qualifiers this season went up in tire smoke mid-track to only go 5.620-seconds at 116.81 mph putting them, momentarily, in the No. 16 spot.

“Unfortunately, we didn’t get down there in Q1. I drove it a bit out of the groove and it went into smoke,” Force said. “We’re collecting all the information from tonight and we’ll adjust for tomorrow. Conditions should still be cool so we should be able to run well. This Monster Energy / Flav-R-Pac team is not letting one run get to us. We get two more tomorrow and we’re confident we’ll step up.”