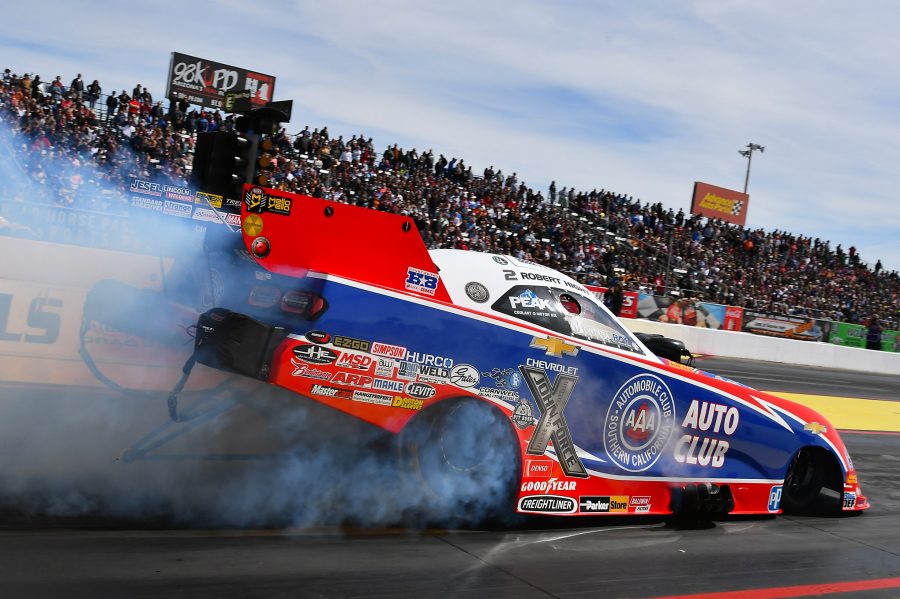 GAINESVILLE, Fla. (March 13, 2019) — Leading the NHRA Mello Yello points standings, Robert Hight and the Auto Club of Southern California team are showing no signs of letting up as they head to the 50th anniversary of the Amalie Motor Oil NHRA Gatornationals at historic Gainesville Raceway.

Hight opened the 2019 NHRA Mello Yello Drag Racing season with a No. 1 qualifying position and a win at the NHRA Winternationals and continued the momentum with a No. 1 qualifier at the most recent event at the NHRA Arizona Nationals. His Sunday at Wild Horse Pass Motorsports Park outside of Phoenix wasn’t quite as long as the 46-time winner would have hoped, he lost in the semi-finals to reigning world champion J.R. Todd, but the performance of his Chevrolet Camaro has both he and his crew excited for what’s to come.

“We’re starting the season off strong, carrying over our momentum from last year,” said Hight. “Jimmy Prock and Chris Cunningham know this car better than anything and they’re focused. We’ve had successful test sessions, been low qualifiers, gone rounds and won a race and we’re only two races into the season so we’re feeling good with where we are and what’s ahead.”

The Gatornationals have been good to the two-time world champion and given the start to 2019, this year’s event should be no different. Hight most recently won in Gainesville in 2016 when he was part of the first Funny Car, Top Fuel double up in John Force Racing history as Brittany Force captured her first professional victory. In 2014, Hight picked up the win defeating team CEO John Force in the finals and got his first win in Florida in 2012. Hight also has two No. 1 qualifiers at the event in his rookie season of 2005 and in 2007. At last year’s Gatornationals, Hight qualified third and had a second-round finish.

“I always look at Gainesville as a major race in the NHRA series. There are five majors and this is one of them. It kicks off NHRA drag racing on the east coast and is always big because of the Drag Racing Hall of Fame induction on Thursday night, so all the ‘who’s who’ of drag racing will be at Gainesville,” said Hight who set both ends of the track at 3.828-seconds and 334.82 mph in March 2017. “With it being the 50th anniversary, all the greats will be there, Kenny Bernstein, the first guy to break 300 mph and he did it at Gainesville, Don Prudhomme, Don Garlits, Darrell Gwynn, Joe Amato, Ed McCulloch, Shirley Muldowney, and so many more. I’m pretty excited and to win the 50th anniversary Gatornationals, that would be a big one. It seems like John (Force) always wins the special races but I’m looking to get it this year.”