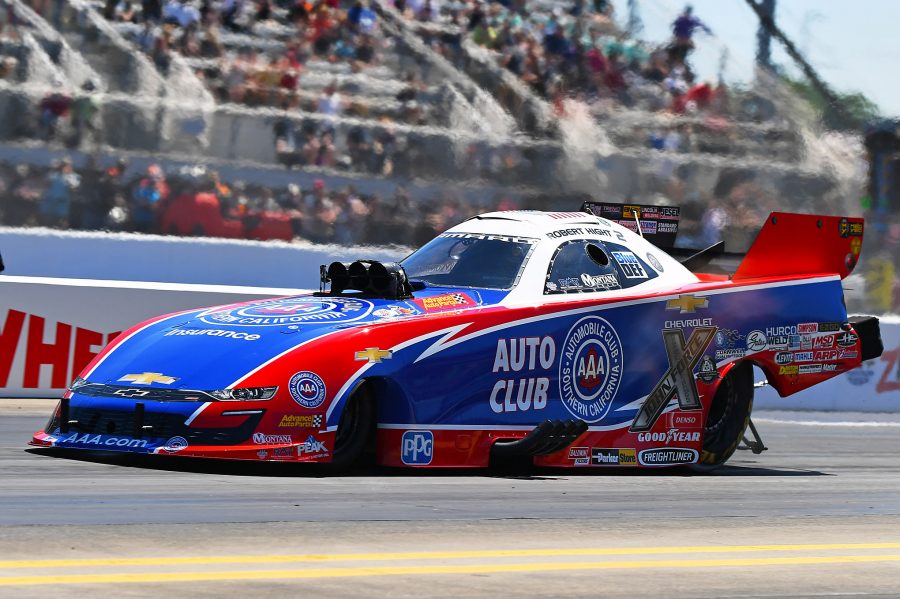 COMMERCE, Ga. (May 1, 2019) — Robert Hight and the Auto Club pf Southern California Chevrolet Camaro SS Funny Car team are heading to the Arby’s NHRA Southern Nationals, the seventh of 24 events on the NHRA Mello Yello Drag Racing Series schedule, leading the points standings with what will be the most consistent hot rod on property at Atlanta Dragway.

Hight and the Auto Club Chevy Camaro team have already tallied three wins and four No. 1 qualifiers in six races and show no sign of slowing their campaign for another championship. After earning three-consecutive No. 1s and two wins, Hight and the Auto Club team had a rare mishap in the form of a No. 9 qualifying position and first quad exit at the Four-Wide Nationals in Las Vegas. The team bounced back in Houston at the SpringNationals, where Hight went from not being qualified on Friday night to the No. 5 spot. The Auto Club team, tuned by Jimmy Prock and Chris Cunningham, went on to dominate race day for their third win of the season doubling up with teammate Brittany Force in Top Fuel. At the most recent event, the Four-Wide Nationals at zMAX Dragway, Hight grabbed the No. 1 qualifier and left with a runner-up finish and 142-points lead.

“We were really close in Charlotte to getting the win and if it hadn’t spun the tires and shut off, we would have had it. We’re still in the points lead though after finishing second and this car is dominant. I know I’ve said this before but I don’t think I’ve ever had a car this consistent and on it, so I know we can get after it again,” said Hight. “Jimmy Prock and Chris Cunningham, all the Auto Club guys, they’ve made my job easy so far this season so I’m going to push and work hard to get our fourth win in Atlanta.”

The two-time Funny Car world champion is the second most successful John Force Racing driver at Atlanta Dragway behind boss, John Force. He has 24 round wins, three Wally’s and one No. 1 qualifier at the facility. Of the three wins, two were against teammates Ashley Force Hood in 2010 and Courtney Force in 2014, the first of his three wins came in 2007. In addition, Hight holds the track record for the quickest pass at 3.880 seconds. At last year’s Southern Nationals, Hight held the No. 2 qualifying spot but after a pedalfest to the finish line, had a first-round exit to Bob Tasca III.

“I’m excited to get to Atlanta. I stayed on the road after Charlotte so I’ve already gotten into the mindset and I’m ready. It’s a back-to-back race and I like getting back into the car this quick without the long breaks, it keeps me in a routine.” said Hight. “This track too, it’s been a good race for me. I’ve won the Southern Nationals three times and I’d like to add another and get some more No. 1 qualifiers.