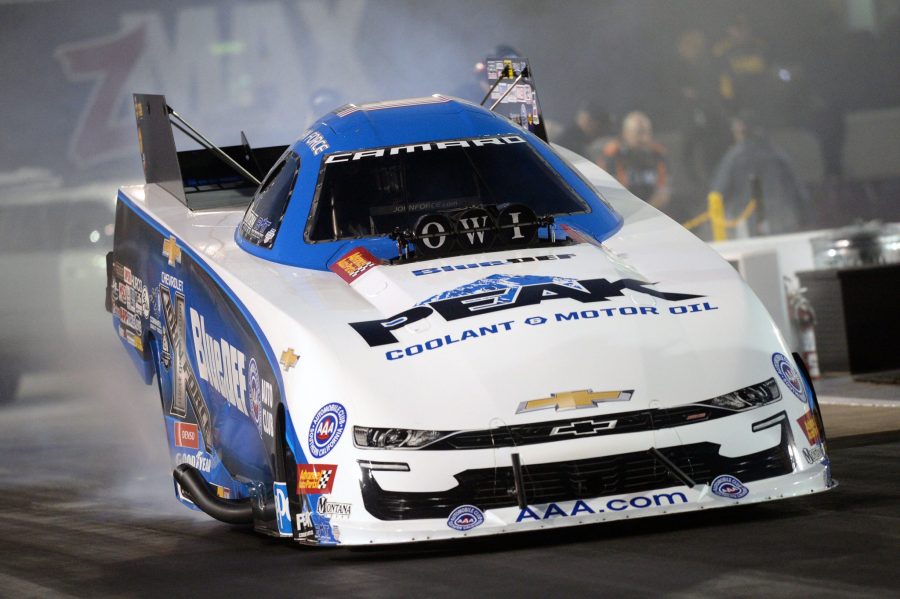 COMMERCE, Ga. (May 1, 2019) — When the NHRA Mello Yello Drag Racing Series reached Atlanta Dragway last May, Hall of Fame owner and driver John Force had suffered numerous explosions and was sitting 11th in the points standings with skeptics questioning his driving abilities. To say the PEAK Coolant and Motor Oil BlueDEF Chevrolet Camaro SS team has done a 180 turnaround is an understatement.

Twelve months after that firestorm, the 16-time champion heads to the 39th annual Arby’s NHRA Southern Nationals, with only one question looming — will the legendary driver celebrate his 150th tour victory on the weekend of a milestone birthday?

Force rolls into Atlanta off a near miss last week at Charlotte, N.C., where a loss of traction negated an early lead and relegated him to a third-place finish in the Charlotte Four-Wide Nationals. Already with a No. 1 qualifier this season (for a record 156th time), Force currently is third in the Mello Yello driver standings behind John Force Racing teammate Robert Hight and rival Matt Hagan. He’d be higher, perhaps even the point leader, had he not lost to Hight in five of the season’s first six races.
Of course, it’s not the first time he has been upstaged by a teammate; not even the first time at Atlanta Dragway. Most memorable was his final round loss to daughter Ashley in the 2008 Southern Nationals, a result that made her the first woman to win a race in NHRA’s Funny Car division.

In 1996, in the midst of an 11-win season that would result in his becoming the first drag racer to earn Driver of the Year honors for all American motor sports, Force sat poised to win the Southern Nationals for a record fifth consecutive time. Instead, he was beaten in the final round by then teammate Tony Pedregon, an upset loss that prompted one of his most famous quips: “I think I’ve hired my own assassin.”

Today, that “internal assassin” is Hight, the runaway point leader at the wheel of the Auto Club of Southern California Chevy who has won the last six head-to-head meetings with his boss and mentor dating back to the 2018 U.S. Nationals.

Nevertheless, he remains upbeat, especially knowing what the car crew chiefs Brian Corradi and Dan Hood have put under him can do.

“The better the car, the more confidence I get,” said the seven-time Atlanta winner. “I’ve been struggling, but I have a good team behind me and I’m learning how to drive again. They’re teaching me. I think we’re getting there, we’re going to get 150, but I’m not focusing on that. I’m focusing on going rounds, doing my job. The wins will come. We’re close. I’m in the hunt and I love it. I love driving this hot rod.”