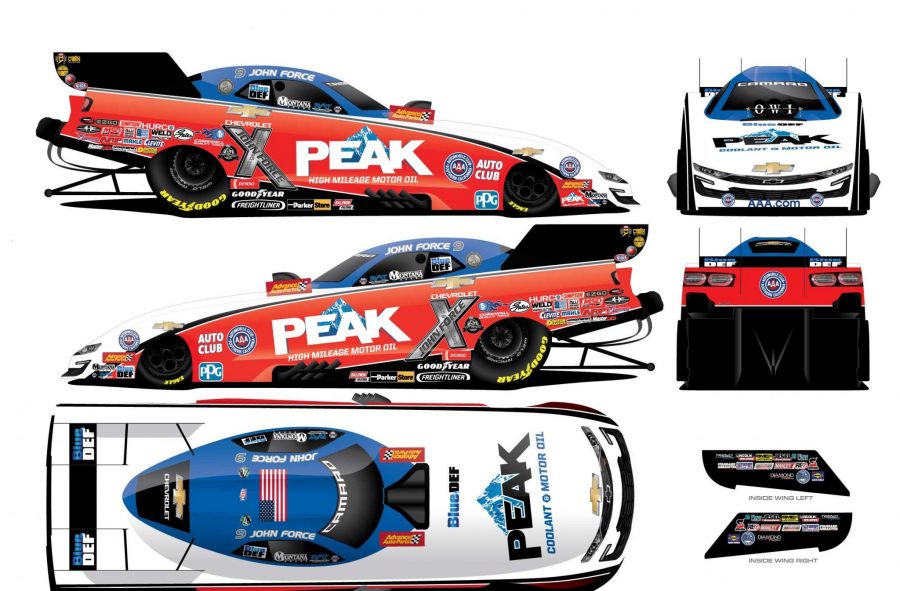 On the hunt for his 150th career win, Force and the PEAK High Mileage Motor Oil team have earned their points position with a runner-up finish, seven semi-final appearances and three No. 1 qualifiers, the most Force has tallied since 2014 where he earned six. The racing icon’s first No. 1 of the season came at the SpringNationals and made NHRA history when daughter Brittany Force also landed the top spot in Top Fuel making them the first parent-child duo to sit No. 1 together. He picked up his second green hat start at the Virginia Nationals and went on to lead the Funny Car class for the third time of the season at the Thunder Valley Nationals where he finished runner-up on Father’s Day weekend.

At the recent Summit Racing Equipment NHRA Nationals, the 16-time Funny Car world champion secured the No. 2 qualifying spot after laying down a stellar 3.884-second pass at 329.02 mph in his Chevy Camaro hot rod. It was one of three consistent qualifying passes that he carried into race day to make his seventh semi-finals appearance. In a rematch from the Thunder Valley Nationals final, Force wasn’t able to advance past rival Bob Tasca III who went onto win the event.

“We had a good weekend in Norwalk. We went to the semis and didn’t get it done but my hot rod is good and its coming around. I’m learning every day with this PEAK team and I’m excited about it,” said Force. “I know 150 will happen soon and after this weekend off we had, it might even come then. We’ll see. All the John Force Racing teams are ready to get to Epping this weekend.”

Force is no stranger to success at New England Dragway where in 2015, he defeated Tommy Johnson Jr. in the final to pick up his first Wally at the facility. At the inaugural event in 2013, Force was the No. 1 qualifier and finished runner-up to daughter, Courtney Force. The driving legend is one of three John Force Racing drivers to make it to the winner’s circle, the others are his daughters, Brittany and Courtney Force.

“I’m ready to get to Epping this weekend. This is a special race for me because I’ve won here and Brittany and Courtney have also won here. It just makes it special for all of us,” said Force. “I’m also excited to be racing for PEAK and showing off their High Mileage Motor Oil on my hot rod. It will be a good weekend, we’ll put on a good show for the fans and our sponsors.”