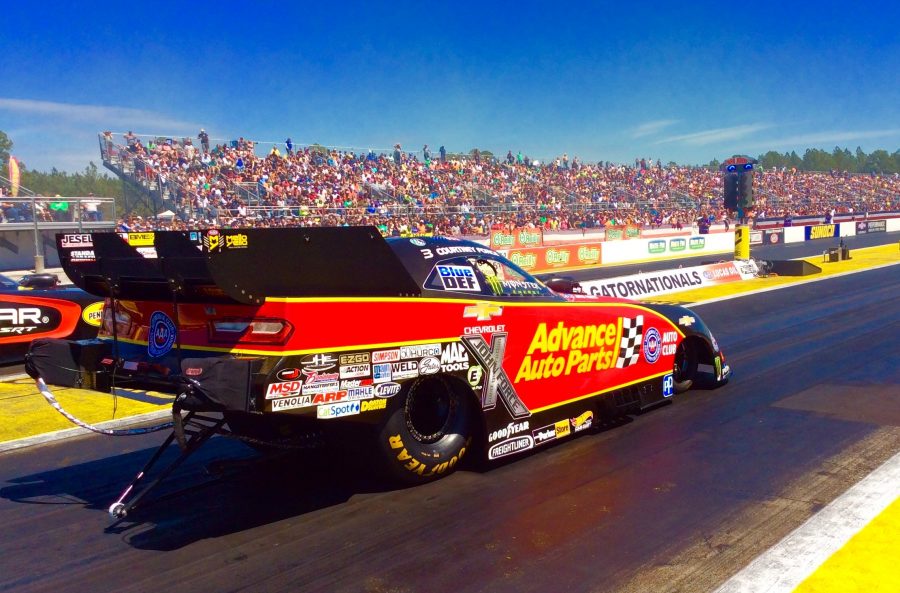 Force has blown the body off of his PEAK Coolant and Motor Oil Chevrolet Camaro at each of the first three events. Planned early shutoffs were the theme for the Camaro Funny Cars as the brain trust of John Force Racing worked together to find the problem.

“I am banking on the experience of the people around me,” said John Force, the eight-time Gatornationals Funny Car winner. “I am the kind of guy that, when it is qualifying day, I run it to the edge. I run it even if I know it will hurt itself. I am rethinking all that. What I am looking is the long haul. To go out here and say I have to win this race or I have to qualify low after as much stuff as we have put on the ground in Pomona and Phoenix and then to come here and do it again is bad. Jimmy (Prock) was up all night and so was (Brian) Corradi. (Jon) Schaffer and (Jason) McCulloch were up all night too. We want to fix this problem and move on.”

Courtney Force and Robert Hight are headed into Sunday race day qualified No. 2 and No. 3 after four rounds of qualifying. Top Fuel champion Brittany Force is 13th and defending Gatornationals winner John Force is 15th.

Courtney Force secured the No. 2 spot after her 3.914 second pass at 332.18 mph in her Advance Auto Parts Chevrolet Camaro SS held up from the second session on Friday. Force will be matched up with her father, 16-time Funny Car champion, John Force in the first round of eliminations.

“Our Advance Auto Parts team has put down some great passes this weekend. Our Q2 pass put us in the No. 2 spot. In Q1 we were going down there pretty good until it dropped a couple holes. It is a process and we learn from these things,” explained Force. “Today we changed a few things to try and learn some stuff to see if we could figure out the common problem with these cars to help my dad out. It is a little bit of a bummer that I have to race him in the first round. Tomorrow is a new day and we will have all our stuff ready and we will put on our game faces to go for that win.”

Coming off a win at the NHRA Arizona Nationals, Courtney Force is looking for the same consistency heading into Sunday.

“I want to have a good side by side safe race tomorrow in round one,” Force said. “Our goal is to take my dad down and have a long day at the track winning rounds. We want to move the momentum over from Phoenix. I feel like my guys have a good handle on this Advance Auto Parts Camaro.”

Robert Hight and his Auto Club of Southern California Chevrolet Camaro SS also hold on to their position with the 3.917 pass at 333.66 from Friday’s second session. Qualifying No. 3 gives Hight Dave Richards as an opponent for the first round of eliminations.

“We got everything done today we wanted to,” said Hight who is racing for his fourth Gatornationals win. “(Crew chief) Jimmy (Prock) is getting a handle on this hot race track. We will be ready tomorrow in this Auto Club Camaro. I have Dave Richards and trust me you can’t take anyone for granted on this class. Top to bottom every driver can go rounds. We will be focused and I have a ton of confidence in all my crew guys.”

Reigning Top Fuel world champion Brittany Force will begin eliminations in the 13th spot after a 5.021 pass at 138.17 from Friday. Her Monster Energy team struggled in qualifying and were unable to make a clean pass down the track.

“At this point our biggest concern is just getting down the race track. We have had four qualifying passes and we didn’t get down there once. I don’t remember the last time we have been in this position,” Force said. “We are going to focus on going out tomorrow and going rounds. That will just prove how strong this team is. I have a lot of confidence in Brian Husen, Alan Johnson and all my Monster Energy crew guys.”

Force will be piloting her Monster Energy dragster against Tony Schumacher in the first round.
“Tony has been one of my favorite drivers since my rookie season,” Force said. “I have always loved competing against him. He is a great competitor and a great driver. Now we are both world champions and I am looking forward to a good race tomorrow.”

After blowing the body off of his PEAK Coolant and Motor Oil Chevrolet Camaro SS during qualifying on Friday, John Force made two early shutoff passes on Saturday but was able t qualify with his 4.281 pass at 222.88 from Friday. He will line up against his daughter, Courtney Force, in round one.

“You have to race tomorrow. I have to be honest we are still walking with this race car. Yesterday we went to 500 feet and then we went to 700 feet and it blew up. We made changes and went to 500 feet without problems and today we made a second qualifying run and ran to 500 feet and the motor looked beautiful,” Force explained. “Tomorrow I am going to have to play the odds game. I am going to run it to 700 or 800 feet and hope (Courtney) gets in trouble. I need to race smart because either way one of us is going to the next round with PEAK, Advance Auto Parts, Monster, Chevrolet and Auto Club on our race cars.”

Eliminations at the third of 24 races on the NHRA Mello Yello Drag Racing schedule will begin Sunday at 11 a.m. ET.