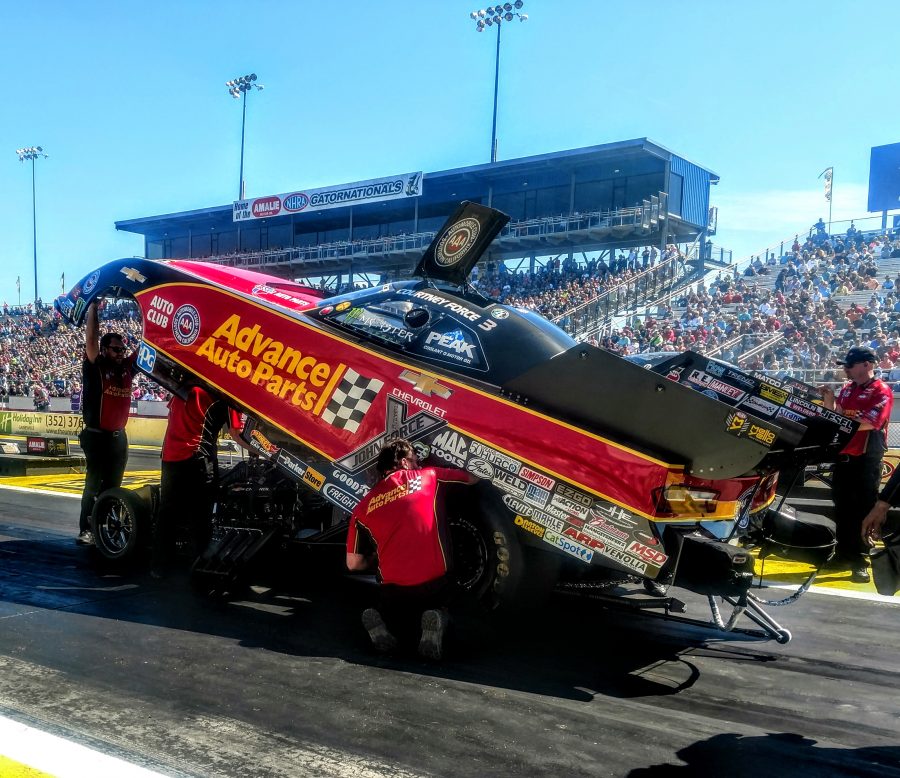 Courtney Force and her Advance Auto Parts Chevrolet Camaro SS laid down a 3.914-second pass at 327.66 mph in the second session of qualifying to land her in the second position. Coming off a win and a No. 1 qualifier at the most recent NHRA Mello Yello Drag Racing Series event, the NHRA Arizona Nationals, Force is competing for her first No. 1 and win at legendary Gainesville Raceway.

“It has been a good day for our Advance Auto Parts team,” Force said. “Our first run wasn’t where we wanted it to be but we fixed the problem. I’m really proud of my team. I heard (crew chiefs) Brian (Corradi) and Danny (Hood) weren’t pleased with the run because they thought it could run quicker. That is why I am so proud to have these crew chiefs and this team behind me. They work so hard to strive to be the best. We are trying to get that No. 1 spot and we’ll fight tomorrow to get it.”

Hight, who is chasing his third No. 1 and fourth NHRA Gatornationals win, raced his Auto Club of Southern California Chevrolet Camaro to a 3.917 pass at 333.66 during the second qualifying session. The effort puts him in the third spot heading into Saturday.

“That was a good run for this Auto Club Camaro,” Hight said. “It was smooth and we can improve on that tomorrow and even on race day. This is a great race track and we can definitely step up the performance. We set the track record here last year and I think there is definitely more out there. Jimmy and Chris will look at the data and continue to improve.”

Brittany Force currently sits in the 10th qualifying position with a 5.021 pass at 138.17. The reigning Top Fuel champion is entering the third race of the season with a positive attitude and the mindset of putting her dramatic Winternationals in the, figurate, rearview mirror.

“Overall with my team going into this weekend I feel good,” said Force, the 2016 Gatornationals winner. “Coming out of Pomona was tough after the wreck Phoenix for me more about getting back in my seat, getting comfortable and mentally putting everything behind me. This weekend that is all behind me and I am ready to race. I am ready to go some rounds and bring home our first win of the season.”

“This is a special track for me. I got my first win and the double up with Robert. It would be a great place to bring home our first win of 2018,” added Force.

John Force is 14th after a half track pass to open qualifying. Returning from an intense explosion at the Winternationals and a major crash at the Arizona Nationals, Force coasted to a 4.315 at 194.27. The eight-time and defending Gatornationals winner was unable to improve his positioning after he blew the body off of his fan designed PEAK Coolant and Motor Oil Chevrolet Camaro before reaching the finish line during qualifying round two.

Immediately after the incident Force’s two major concerns were “Did I make The Show?” and getting to the bottom of the issue with his 11,000 horsepower Funny Car.

“All the crew chiefs from Jimmy Prock to Brian Corradi to Daniel Hood right down to Jon Schaffer and Jason McCulloch, Alan Johnson everybody had input into this race car to try and figure out what happened in Pomona and then again in Phoenix,” Force explained. “I really thought we had it. I thought we were there. In the first round we drove it 500 feet and shut it off. It looked great. We ran it again that run and I was only going to drive it 800 feet even if we didn’t make The Show.”

“The Show” continues Saturday with the final two qualifying sessions at 12:45 p.m. and 3:45 p.m. ET. Eliminations at the 49th annual NHRA Gatornationals are set to begin Sunday at 11 a.m. ET.