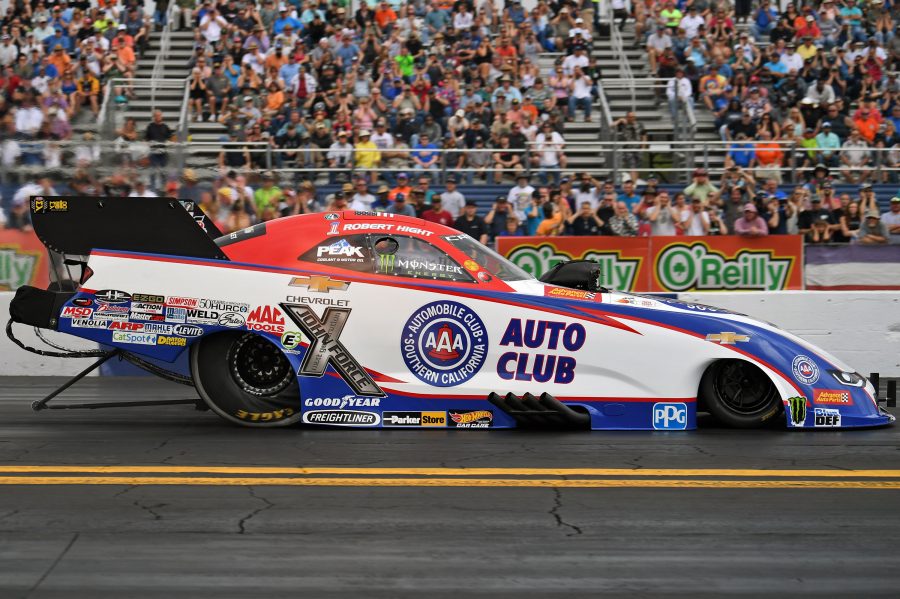 Hight went out in the second round in spectacular fashion as both he and his opponent, Matt Hagan, blew the bodies off of their Funny Cars. Hight’s Auto Club of Southern California Chevrolet Camaro SS crossed the finish line with a 4.067-seconds at 265.53 mph following behind Hagan’s 4.027 at 291.26.

“I felt the car nose over just a taste and my initial thought was it was starting to slip a little. The track is hot and it is a little greasy out there,” explained Hight. “I couldn’t see Hagan over there and it wasn’t like it was hazing the tires or anything else. As it turns out the tires weren’t spinning at all.”

When Hight returned to the pit area and began evaluating with crew chief Jimmy Prock, it became clear his Auto Club Chevrolet Camaro was immediately wounded as it neared the finish line and an internal chain reaction led to a dramatic explosion as Hight was pulling away.

“It kicked two rods out when it blacked the bearings in the crank and then it hit the valves which blew it up. The car gave me no indication at all before it exploded,” conclude Hight

Hight’s initial concern after he stopped his race car was that he possibly impacted Hagan during his incident.

“What really scared me was once I got it under control and I looked over and saw his body was off his car. I am thinking, ‘Oh man, he got gathered up in me.’ Then I stood up and looked and his injector was sideways. I realized he had an explosion as well. We are just lucky we didn’t get into each other. I didn’t know who won. I was hoping we got the win light and we could come back and get another car together and try and win this race.

Courtney Force and her Advance Auto Parts Chevrolet Camaro got into trouble in the quarterfinals while racing Ron Capps. Force pedaled to an 8.255 pass at 88.83 while Capps managed a 4.060 at 317.64.

“We pulled the car up for second round and unfortunately smoked the tires at the hit of the throttle. I tried to gather it back up and get back on the throttle but Capps had already taken the win,” Force explained. “We had a safe weekend and that is the most important thing. All the teams are going to be working hard to figure out what is going on with our race cars before we get to Las Vegas. I am proud of how this Advance Auto Parts team performed this weekend and the fact that we are going rounds. We are going to focus on the positives.”

Force defeated her father in the first round with a 4.003 pass at 277.20. She is now 2-1 versus John Force at the Gatornationals and 10-15 in her career. She has won three of the last four races against him. Force is now third in the points standings.

“It was a little nerve racking pairing up with my dad. I am always wanting to be behind his car at the starting line, hoping for a safe run for him. When I am in the other lane I can’t see what is going on with him. I am just out there to focus and do my job racing straight down the center of my lane. It dropped a hole down track and shut off on me but we were still able to get around him for the win,” Courtney Force said.

Top Fuel world champion Brittany Force made her best run since her dramatic wreck at the season opening NHRA Winternationals. Unfortunately, it wasn’t enough to get the first-round win against Tony Schumacher. Force’s 3.742 pass at 325.53 in her Monster Energy dragster was bettered by Schumacher’s 3.717 at 329.26.

“The car went straight down the track. We struggled in qualifying, but we figured it out for race day,” Force said. “We really did need to figure it out for yesterday to have a better pass than that. Still, it was outstanding. But against Schumacher, we weren’t able to turn the win light on. We are leaving good. It was an awesome run. To come out on race day and be able to put up a number like that, we’re happy.”

Despite not winning against Schumacher, Force’s time would have won six of the seven other first round races.

Sixteen-time champion John Force ran a planned 700-foot shut-off in the first round against daughter Courtney Force. After three consecutive races with an engine explosion, John Force’s final three passes of the weekend were used as test laps.

“We have to evaluate it and go test. We’ll figure it out. Our plan to test in the first round was good. The car looked good,” said Force. “It’s a matter of you don’t want to hurt the car and you don’t want to hurt somebody else. We tried to run it for every lap at three races and test sessions and all we did was blow it up.”

The NHRA Mello Yello Drag Racing season continues with the 19th annual Denso Spark Plugs NHRA Four-Wide Nationals at The Strip at Las Vegas Motor Speedway on April 6-8. It will be the first four-wide format to be run at the facility.