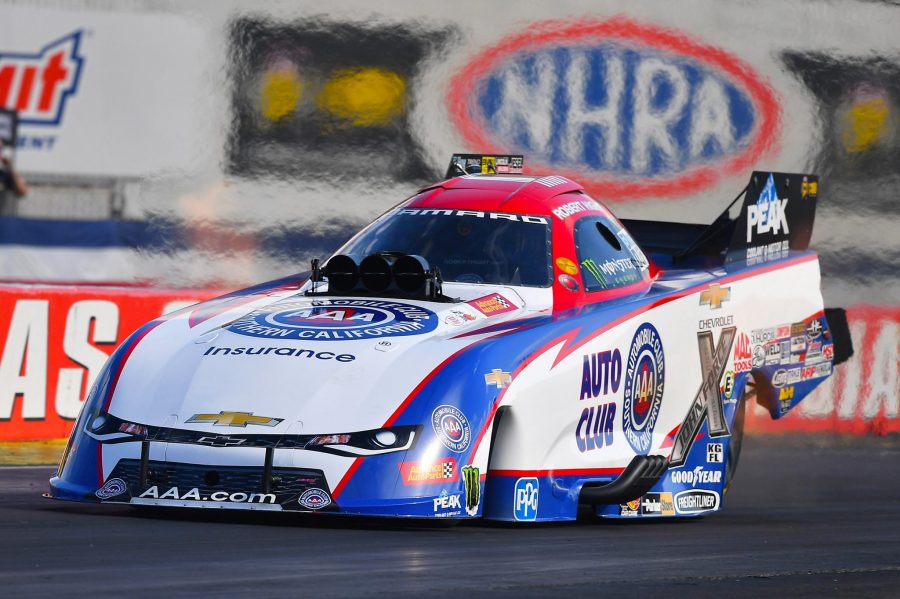 BROWNSBURG, Ind. (Sept. 02, 2018) — All four John Force Racing teams will head into race day at the 64th annual Chevrolet Performance U.S. Nationals with Mello Yello Countdown to the Championship playoff berths secured. In qualifying for Monday competition, both Brittany and John Force, who were uncertain of their fate until the end of five sessions and three days of qualifying, earned positions in the six race playoffs joining teammates Courtney Force, who locked in the No. 1 starting spot on Friday, and Robert Hight, who will be racing to clinch the No. 2 spot behind Courtney.

Robert Hight had a clean run during his first run of the day. The Auto Club of Southern California Chevy Camaro SS ran a 4.174-second pass 238.22 mph and while they didn’t move up the ladder, the run gave the team some added confidence. The information they gained on that first run lent itself to the 4.000 pass at 320.66 mph in the final session of the day. While the Auto Club team is still not running the numbers Hight and crew chief Jimmy Prock are aiming for, that final qualifying pass did move the Auto Club Camaro up two spots into the No. 8 position and earned him three bonus points for being second quickest of the session. The improvement is bitter sweet, in the first round Hight will now have to face mentor and team owner John Force.

“We made a good clean run in the last session and feel good about first round tomorrow,” said Hight, who has three wins at the U.S. Nationals. “We have just been a little off in the heat and have been dropping cylinders in this Auto Club Camaro. This is the biggest race of the year and we are focused on winning the race and also getting that No. 2 spot in the Countdown.”

John Force and his Chevrolet Accessories PEAK Camaro made it from A to B during the fourth qualifying session, running a 4.181-second pass at 303.03 mph that was an improvement from Saturday qualifying but not enough to move him up the qualifying order. His second run of the day was a 4.154 at 269.13 after his Chevy Accessories PEAK hot rod shut off just before the finish line. Force will start race day from the No. 9 position off the efforts of his 4.003-second pass at 320.89 mph from Friday night.

“The track has been tricky for everyone. Jon Schaffer and Ronnie Thompson have been working on this tune-up since testing and we are getting down the track,” said Force, a four-time U.S. Nationals winner. “I want to win this race, that’s why I’m out here, to win and to get my 150th win and then to keep winning. Indy is a special race and it would be great to get that win tomorrow. I am glad all our crew chiefs are sharing info and working together. All our hot rods are getting down the track, we’re improving so I’m ready for the fight.”

Robert Hight and Force will face each other for the 45th time, they are currently tied 22-22. However, Hight has a 2-1 advantage over Force at the U.S. Nationals. Hight beat Force in the semifinals in his 2009 championship season and again in the second round in 2015. Hight was runner-up at the event both years.

After running quickest of the session during Saturday’s Q3, Courtney Force and the Advance Auto Parts team started the final day of qualifying from the No. 6 position. Their first run of the day didn’t go as planned as they smoked the tires and had to shut off early. The final qualifying session saw the Advance Auto Parts Camaro put a hole out mid track to coast to a 5.353-second pass. Force and her team will take the data from the day, along with what they learned during their Saturday runs in the heat of the day and turn it into race day success.

“I think our Advance Auto Parts team doesn’t have the consistency we were looking for coming into qualifying, but we definitely learned some things through our five qualifying runs. We’re feeling pretty confident that we’ll be ready to go tomorrow. It feels nice that it’s happening now because we have nothing to lose. We have clinched the No. 1 spot and we can just focus on going out there and trying to win the race,” Force said. “It’s nice to not have to worry about points and just focus on trying to get this car running better so that we’re ready in the Countdown and hopefully go after a win here because this is the biggest race of the NHRA season. I even felt extra pressure when I rolled up there on that final run, not only because we wanted to improve in qualifying but also Don “The Snake” Prudhomme stuck his head under my car body and gave me a thumbs-up. That’s the reason I’m out here. I thought it was really cool to see him up there on the starting line and I wanted to get a really great run on the track to impress him and obviously for all of our sponsors.”

Force, in the sixth spot, will line up with Funny Car veteran Jack Beckman, who qualified 11th, in the first round. It is the 20th time they have faced each other with Beckman holding a slight advantage at 10-9.

Sitting at 14th, Brittany Force and the PEAK Coolant and Motor Oil dragster were overly aggressive for the track in the first session of the day and while they ran early good numbers, they smoked the tires just past the 330-mark, coasting to a 4.501-second pass at 176.12 mph. In the final qualifying session of the weekend, Force and the PEAK team ran their second sub-four-second pass of the weekend with a 3.858 pass at 315.78 mph even after putting a hole out at the eighth mile. Force remains 14th based on her 3.836-second pass at 318.62 mph from the second qualifying session.

“I’m excited to be here. We’re sitting 14th, which is a tough spot to be in. It’s anyone’s game tomorrow and it’s going to be hot again. We had two good runs during qualifying and hope to beat Antron (Brown) to the finish line (in the first round) and go some rounds tomorrow. We need to pick up points and to make our way up the standings going into the Countdown.”

Force will be racing three-time Top Fuel world champion Antron Brown in the first round of eliminations. Fore is 6-13 against Brown.