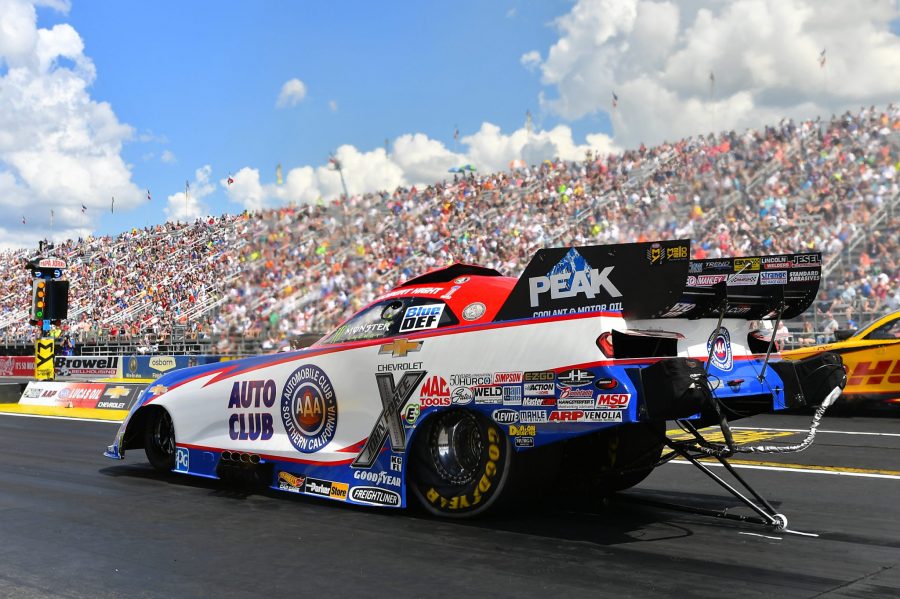 They will join Courtney Force, driver of the Advance Auto Parts Chevrolet Camaro SS, who already had earned the No. 1 starting position in Funny Car for the six-race playoffs that begin in two weeks at Reading, Pa.

Hight and his Auto Club of Southern California Chevy Camaro SS will begin their title defense from the No. 3 starting position after being ousted in the second round Monday by No. 1 qualifier and eventual winner J.R. Todd. The Auto Club Camaro smoked the tires to 4.614-seconds at 212.53 mph and was unable to catch Todd’s 4.160-second pass at 286.32 mph.

Hight started the day as the No. 8 qualifier and lined up against his mentor and team owner John Force in the first round. Hight and his Auto Club team ran quickest elapsed time of the event on a steamy race track with a 3.985-second pass at 321.45 mph.

“We made a great run in the first round and that was our best run of the weekend. That 3.98 was strong but we hurt it at the top end. We had to replace the motor for the second round and we just couldn’t duplicate that first round ET,” explained Hight. “We weren’t looking to run that quick but we definitely wanted to get close to it and I thought we could in this Auto Club Camaro. This is Indy and every time you don’t win it you realize how special your previous wins were.

John Force drove the Chevrolet Accessories version of his PEAK Coolant and Motor Oil Chevrolet Camaro to ninth place in the regular season standings, extending his record-setting string of consecutive Top 10 finishes to 34.

It was an early Sunday for Force and the Chevrolet Accessories PEAK Camaro at the U.S. Nationals. Their No. 9 qualifying position had them matched up with Robert Hight to open eliminations. Force laid down a 4.561-second pass that just wasn’t enough for Hight’s impressive 3.985.

“I got loose out in the middle. Robert ran 3.98 and I was beside him until I got loose. We have been struggling a little this weekend but we were good enough to get into the Countdown and that opens the door for us to win the championship,” Force said. “I don’t like losing Indy but it is part of the game. My focus is the Countdown now and getting another championship and that 150th win.

“In the big picture, all four of my race cars had a shot at winning Indy. We also all locked into the Countdown before the race today so we could just focus on racing today. It is the Chevrolet Performance U.S. Nationals and everybody is out here trying to win and we just didn’t get enough win lights today. We are talking to all the teams about maybe testing next week to get ready for the playoffs.”

The Hall of Fame inductee is only one of seven pro drivers to have contested every championship in the Countdown Era. The others are Tony Schumacher in Top Fuel, fellow Funny Car drivers Ron Capps and Hight, former Pro Stock champion Jason Line and Pro Stock Motorcycle champions Matt Smith and Eddie Krawiec.

Brittany Force, meanwhile, will start the playoffs No. 8 in Mello Yello points after her PEAK Coolant and Motor Oil Top Fuel dragster lost traction at half-track in the first round against three-time World Champion Antron Brown.

After three days and five sessions of qualifying with two sub-four-second runs, Force and the PEAK Coolant and Motor Oil team lined up as 14th against the No. 3 qualifier, Antron Brown. It was a close race early on but the reigning world champion smoked the tires at half-track to cross the line at 4.693-seconds to Brown’s 3.835-seconds.

“This is a big race for every driver, it’s the most historic race. Legends have gone down this track, they come back and they’re walking all around. I’ve been coming here since I was a baby in the winner’s circle with my dad,” Force said. “It’s one I really want to win. It wasn’t our turn this year but one day we’re going to end up in that winner’s circle here.”

“The biggest thing right now is that we’re locked into that Countdown. Coming into the race we didn’t know where we stood,” Force explained. “We locked in, we’re eighth right now in points, that’s huge for us because that means we have a chance to go after another championship and You could win from any spot, we did it last year from the sixth spot and we’re hoping to do it again this year form the eighth spot.

Courtney Force and the Advance Auto Parts team wrapped up a long U.S. Nationals weekend with a quarterfinal finish. They started from the No. 6 position after finding consistency through the five qualifying rounds. Force powered past NHRA veteran and 2012 Funny Car champion Jack Beckman in the first round with a solid 4.095-second pass at 308.35 mph after Beckman smoked the tires and crossed the line at 5.089-seconds.

The quarterfinal round was a handful for both Force and her opponent, two-time champion Matt Hagan. They both started smoking the tires midtrack but Hagan was able to drive around Force’s 4.557-second pass at 219.15 mph with a 4.397-second run.

“It was tricky conditions for us, but I feel good about how we kind of turned things around on race day and I feel like we had some good runs. (In the second round), we struggled a little bit down track and I did the best job I could to pedal it and drive around Hagan,” Force said. “It’s a bummer because this is the U.S. Nationals, but everything starts over after this event. Obviously, we wish we could have won such a big event, especially with our manufacturer Chevrolet and Advance Auto Parts and all our sponsors. We’re going to look forward to the championship. The points are reset and our Advance Auto Parts team is going to be ready in the Countdown. We couldn’t get the track figured out here in Indy but we’ll be ready for the next race.”
The Mello Yello Drag Racing Series continues with the first race of the Countdown to the Championship, NHRA’s six race playoffs, in Reading, Pa. The Dodge NHRA Nationals take place Sept. 14-16 at Maple Grove Raceway.