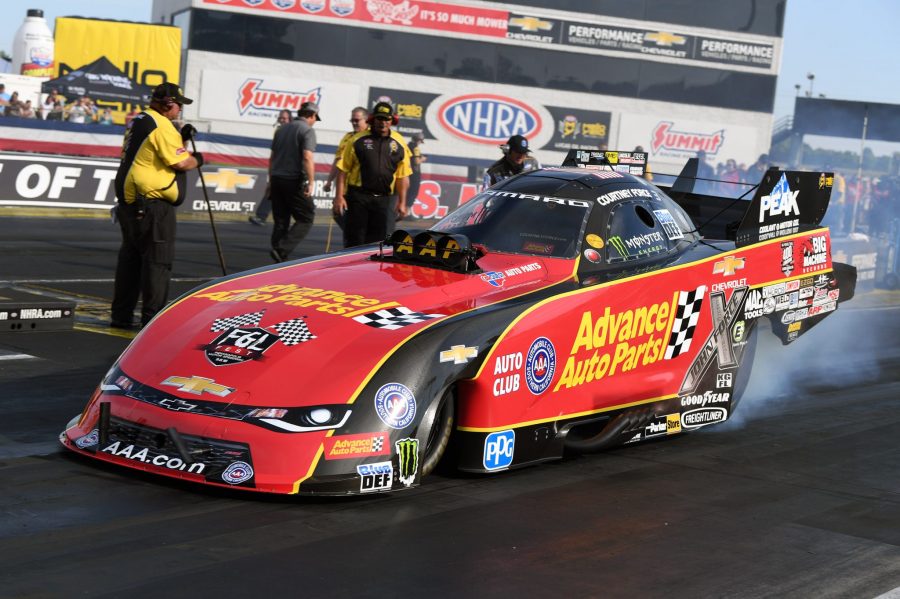 BROWNSBURG, Ind. (Sept. 1, 2018) — Courtney Force moved up five spots Saturday at the Chevrolet Performance U.S. Nationals to lead John Force Racing at the end of two of three days of qualifying. Robert Hight was quickest of a session, Brittany Force improved on her Friday time and John Force will have two more passes to find consistency at Lucas Oil Raceway at Indianapolis.

Points leader Courtney Force and her Advance Auto Parts Chevrolet Camaro SS, who have locked in the No. 1 spot in the Mello Yello Countdown to the Championship NHRA’s six race playoffs, muscled their way through the field with a 3.959-second pass at 325.69 mph that jumped them to the No. 6 spot and earned them an additional four bonus points for being quickest of the session. They started the day smoking the tires to a 4.873 at 162.22 throughout a tricky nitro qualifying session that saw only two Funny Cars make a full pass.

“That was a solid run by my Advance Auto Parts team and an incredible job by my crew chiefs. We learned something in the heat earlier today and we fixed that problem for the second session. We were kind of overpowering the track a little bit and as my crew chief said we needed less ‘cowbell’,” Force said. “We got less cowbell on that second run and less was definitely more. We were quickest of the session with a 3.95 at 325 mph. That line tries to pull me hard to the inside and I just tried to hold it in the groove and we got it to hold up. It is a tricky track but we are still having a lot of fun out here because this is the biggest race of the year. That run gives us a lot of confidence going into tomorrow and also race day.”

Robert Hight, the reigning Funny Car champion, opened up Saturday qualifying on a positive note. His Auto Club of Southern California Chevrolet Camaro was one of the two Funny Cars to make it down the track during the warm weather conditions. His 4.096-second pass at 272.23 mph wasn’t an improvement on his Friday time but he did earn four bonus points for being quickest of the session. The little points are important to the three-time U.S. Nationals winner as he is battling to start the Countdown to the Championship from the No. 2 spot behind teammate Courtney Force. In the third session, the Auto Club team had a hole out just past half track and had to shut off early. They’ll go into Sunday in the No. 10 spot.

“We are right there and I really thought that last run was going to get to the finish line. We dropped a cylinder and I had to really steer it. It was really pulling and even with a cylinder out we saw great numbers,” explained Hight. “This Auto Club Camaro is very close to making some very quick runs. We have two more runs to get ready for race day. We picked up some bonus points in the first round as the quickest Funny Car and we are going to try and do that twice tomorrow.”

John Force and his Chevrolet Accessories PEAK team were aggressive in both sessions on Saturday overpowering the track during both sessions. They opened Q2 with their Camaro smoking the tires and it’s rear end making an effort to go sideways but they crossed the line with a 4.852-second pass at 164.77 mph. In the third session, the Chevrolet Accessories PEAK Camaro shut off early for a 4.312-second pass at 222.66 mph. Force will start Sunday at the No. 8 spot off the efforts of the 4.003-second pass from Friday night.

“This is the biggest race of the year with the biggest crowds and everyone wants to win Indy. We are being aggressive but we also have a plan for this tune up,” Force said. “I have confidence in my crew chiefs and everyone is working together. We have Jimmy Prock, Brian Corradi, Dan Hood and Chris Cunningham all working together with our team. We are sharing info from all the runs and we are seeing results. Courtney and Robert’s hot rods made good runs today and we are figuring a few things out. I am excited to get racing and we have two more shots tomorrow.”

Starting the day from the No. 11 position, Brittany Force piloted her PEAK Coolant and Motor Oil dragster to a stout 3.836-seconds at 318.62 mph in during the second qualifying session and was one of only two dragsters to make it down the hot race track. She was quickest of the session, picking up four valuable bonus points as she battles to move up in the points standings. In the fourth session the PEAK team smoked the tires at the 330 mark for only a 4.613-second pass at 166.27 mph, unfortunately, the cooler conditions worked in favor of her competitors and she moved down to the No. 14 spot.

“Looking at the standings and seeing my PEAK Top Fuel dragster No. 14 is not where we want to be but luckily for the Chevrolet Performance U.S. Nationals you get an extra day of qualifying. We will have two more runs tomorrow and they will be big runs. We’ll be in the heat again and it will be comparable to race day. If we get two good runs tomorrow I will have even more confidence going into race day. We want to move up the qualifying sheet as much as we can,” Force said. “Looking at the qualifying times just shows you we are all crunched together from No. 9 to No. 14. We are all running about the same elapsed time. That shows you how difficult this track is and how competitive this field is. It was also tough to get down the track for everyone in the heat of the day. It will be anyone’s game tomorrow.”