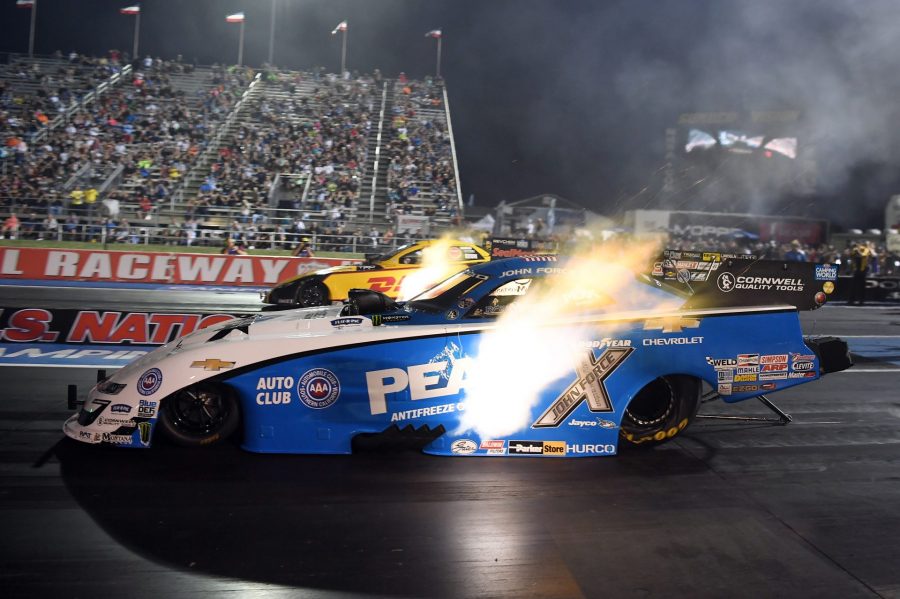 INDIANAPOLIS (Sept. 03, 2021) – The John Force Racing team returned to the most prestigious event on the NHRA Camping World Drag Racing Series, the Dodge//SRT U.S. Nationals at Lucas Oil Raceway, with finesse on Friday night. Both John Force with the PEAK Antifreeze and Coolant Chevrolet Camaro and Brittany Force with the Monster Energy dragster took the provisional No. 1 positions while Robert Hight and the Automobile Club of Southern California Chevy sit solidly in No. 3.

John Force took the PEAK Camaro to a stellar 3.877-second pass at 330.72 mph under the lights in the first qualifying pass of the U.S. Nationals. Force is looking to secure his 12th No. 1 qualifying position at the historic facility, but his first since 2006. His 11 top spots are already more than at any other event in the series.

“I’ve always loved this. Go out here in Indy at night, go down that racetrack, header fire on both sides, driving around weaving, yeah it’s a turn on,” Force said. “It’s a great night at Indy. Our teams are doing well. This PEAK Chevy, that Monster Energy dragster and Auto Club Camaro, we’re all running well, I’m proud of us.”

Brittany Force and the Monster Energy team are once again in familiar territory after their stunning 3.684-second pass at 334.57 mph has them sitting at the top of the Top Fuel field. Force is performing to secure her sixth consecutive and eighth overall No. 1 this season.

“Potentially eight No. 1 qualifiers, that’s pretty cool. It says a lot about this team, David Grubnic and Mac Savage and all these guys,” Force said. “We want No. 1 qualifiers, but we also want to win on race day. We had some luck a couple weeks back in Topeka, but we want to do it here, the biggest race of the season, Indy. I’ve been coming here since I was a baby, love this place and we want to get the win here.”

The Automobile Club of Southern California Chevy was handled to a 3.889-second run at 329.67 mph by three-time champion Robert Hight to currently put him in the No. 3 qualifying spot heading into Saturday. Hight is going after his second No. 1 spot at Lucas Oil Raceway.

“This was a good start to the weekend,” Hight said. “This Auto Club team put in some extra work after Brainerd, figured some things out and left testing really excited for what we think we can do. We’ll keep it up for tomorrow, go some rounds on Sunday and make up a couple of spots in the points on Sunday to start the NHRA Countdown in a prime position for another championship.”